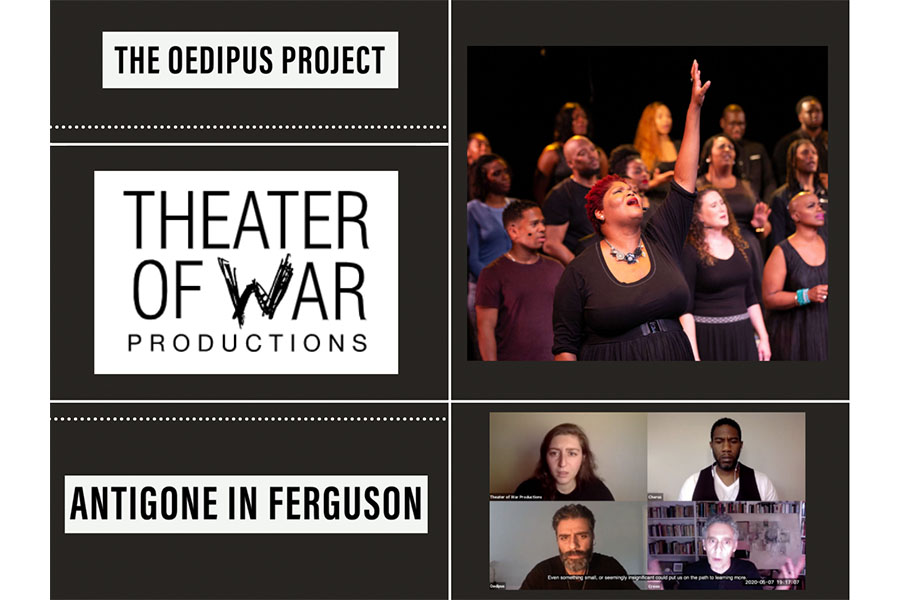 The Theater of War Productions takes seminal works of literature and adapts them to face the most pressing contemporary societal obstacles.

Often traced back to ancient Greece, circa sixth century Before Common Era (BCE), theatre has always served as a staple of human connection, storytelling, and entertainment.  Under the notion that theatre has the ability to spark social change, Mr. Bryan Doerries and Ms. Phyllis Kaufman co-founded the public health project, Theater of War Productions, in 2009.  Mrs. Linda Vasu, Sacred Heart Greenwich Assistant Head of School and English Teacher, brings her expertise into the discussion of seminal pieces of literature as catalysts of societal reform.

Ms. Kaufman acted as Theater of War Producing Director from 2009 to 2016.  Mr. Doerries is the current Artistic Director.  The pair’s original intent was to destigmatize psychological injury, such as Post Traumatic Stress Disorder among veterans.  They presented readings of Sophocles’s plays to provoke town hall-style discussions for service members, veterans, caregivers, and families, according to theatreofwar.com.  Ms. Kaufman and Mr. Doerries believe that talking about stigmatized issues allows space for healing and growth.

Theater of War incorporates a diverse range of issues, including the impact of war and violence, community and police relations, ethics and the justice system, domestic violence, climate change, racial injustice, and mental health.  The company has facilitated events for over 500,000 people and introduced 22 different programs across the world, using readings of iconic plays and works of literature to spark conversations that lead to societal reform.  These discussions aid in reconciling the texts with modern audiences to reduce stigmas, cultivate empathy, and formulate a deeper understanding of controversial issues.

Theater of War Productions works with a variety of organizations and government agencies, some of which include the United States (US) Department of Defense, Stavros Niarchos Foundation, National Institutes of Health, United Services Organization, and the New York City Department of Cultural Affairs.  The project also partners with museums, universities, homeless shelters, hospitals, mental health facilities, prisons, and activist groups, according to theatreofwar.com.  Additionally, prominent film, theater, and television actors, such as Mr. Adam Driver and Ms. Samira Wiley, participate in the readings to draw in a wider prospective audience.

Each event follows the same structure.  First, the performers read the text.  Next, community panelists begin the discourse by sharing their initial reactions to the reading.  Mr. Doerries and a selection of panelists then facilitate a discussion open to audience members.  When using a virtual format, the audience has the option to use the Zoom “raise hand” feature at the bottom of their screen and the facilitators will call upon them to speak.

Following the police killing of Mr. Michael Brown in 2014, Theater of War and residents of Ferguson, Missouri collaborated to create a multidimensional production.  Under the influence of Sophocles’s Antigone, Mr. Doerries translated and directed the Greek tragedy while Mr. Phil Woodmore composed a musical accompaniment in which a choir of police officers, youth, activists, and involved citizens from Ferguson and New York City sang.  Following its debut at Mr. Brown’s secondary alma mater, Normandy High School, “Antigone in Ferguson,” moved to the Harlem Stage, and eventually a virtual setting.  At this new location, Theater of War strove to draw in an audience from across New York City.  They supplied transportation, connected with outside projects, and hosted local choirs to strengthen the ties among the community.

Antigone follows an ancient civil war in Thebes, during which Eteocles and Polyneices, King Oedipus’s sons, kill one another.  Creon, the brothers’ successor, refuses to bury Polyneices in an attempt to penalize his seeming disloyalty.  Antigone, in her unwavering morals, secretly buries her late brother despite Creon’s law.  As a result, Creon banishes her to an isolated, painful death.  Haemon, Creon’s son and fiancé to Antigone kills himself, prompting Eurydice, his mother, to do the same.

Theater of War’s chilling adaption sheds light on the wounds left in the wake of Mr. Brown’s death while simultaneously bringing racial injustice and police violence across the nation to center stage.  By spotlighting the tragedy’s group chorus, “Antigone in Ferguson” highlighted the value of community voices.  In this specific production, the energy of the chorus, which took the form of a gospel choir, prompted a visceral response among the audience and panel members.

Antigone focuses on a community’s grief and suffering in the aftermath of self-centered political decisions.  Mrs. Vasu, who discusses the play with her tenth-grade English students, recalls the idea of mutual prospering and equality in society.

“I think this updated production is hugely important for the idea of flourishing,” Mrs. Vasu said.  “How do we help everybody to flourish in a participatory democracy that is about equity and justice?”

During the early months of COVID-19 isolation, Mr. Jumaane Williams, New York City Public Advocate, and Mr. Doerries reflected on their in-progress translation of Sophocles’s tragedy Oedipus the King.  Their initial intent was to use the play’s themes of intergenerational curses, denying prophecy and authority, and ignoring apparent systemic issues to discuss environmental climate change, according to brooklynrail.org.  Once the coronavirus pandemic struck, Mr. Doerries and Mr. Williams gave life to “The Oedipus Project,” additionally examining the effects of isolation and the coronavirus pandemic.  True to the current setting, Sophocles wrote Oedipus the King which people performed in 429 BCE, in the aftermath of a plague in Athens, Greece.

COVID-19 resulted in the loss of live events.  However, the desire and necessity for connection surged forward.  Similar to other passionate theatre artists, Mr. Doerries longed to restore and preserve the ties often found within a theatrical experience.  He decided to switch to an online format, hoping to still reach a diverse group of people in different settings and foster communication.

Oedipus The King, or Oedipus Rex, is unique because Sophocles addresses a contemporary situation.  During a time of strife and plague, the leadership of Thebes ignores the societal problems and obvious warnings from Tiresias, the wise spiritual advisor. While the self-serving leadership denies moral responsibility, the chorus rises up in a fight for their human rights.

Mrs. Vasu believes in the power of both the ancient Greek and modern chorus.  In an era of COVID-19, responsibility and the ability to compromise are especially influential.

“How to lead, how to yield, and how to pivot and change one’s opinion.  These same issues are prevalent now, how to yield to principles of democracy and justice and kindness and urgency,” Mrs. Vasu said.  “Leadership is hugely important, and this concept is updated and relevant for our time because we are in a pandemic now.”

Mrs. Vasu notes that both tragedies relate to a transgression in the social fabric and the obligation to reestablish order.

“It is very important to update and allow modern audiences to understand what it means to process trauma at a societal level and not just at the individual level, and to address ideas of collective suffering because of the consequences of a rip in the social order,” Mrs. Vasu said.  “Both plays are about the theme of suffering.  The way the Black community has suffered in the Ferguson aftermath, and the way around the world people have suffered from the pandemic.”

Using theatre as a catalyst for social change is significant in contemporary culture.  While capturing the attention of an audience, a performance cultivates a collective experience based on empathy, compassion, and reflection.  Those on the stage reach out and attempt to create a bond with the audience, hoping to elevate their message.

It is essential not to doubt the strength of a chorus as a group of people united for a cause for the greater good.  There is an ethical obligation to encourage the human dignity of every person.  Mrs. Vasu circled back to discuss the way the Theater of War provokes questions of thriving.

“Each one of these plays in the Theater of War and their magnificent productions asks questions,” Mrs. Vasu said.  “How do human beings and individuals flourish beyond trauma? In many ways, this is very relevant for us to think of as modern people because what we are talking about are plays that present a challenge to the collective.”