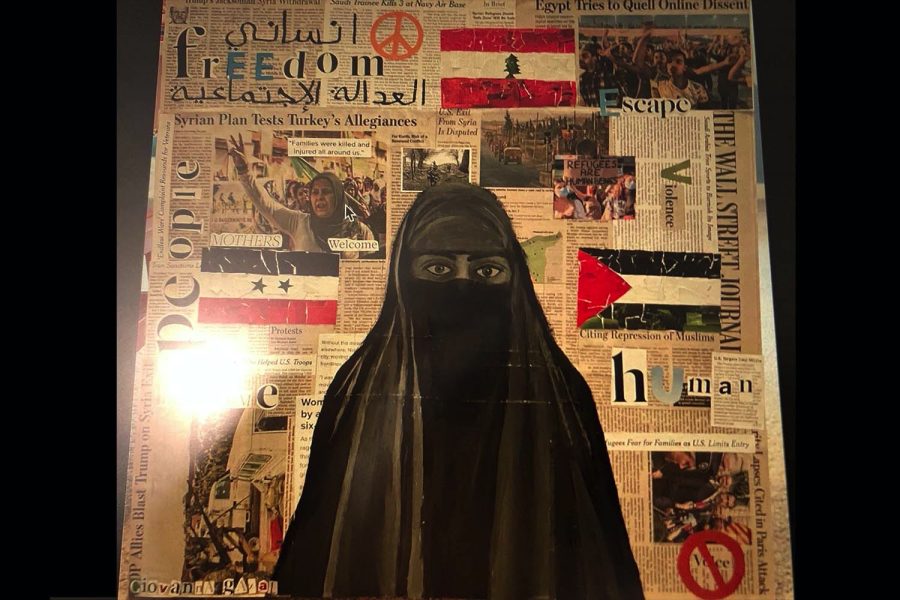 Junior Gigi Gazal compiled a variety of different newspaper articles from the past three years into a collage that focuses on the violence directed towards Muslim refugees as wells as the difficulties Middle Eastern citizens face.  The piece also includes images of protests against the unjust treatment of refugees and the militarism within countries.

Gigi created the piece “إنساني,” which translates to “human” in English, to focus on the refugee crisis in the Middle East and the oppression in those regions.  While using many newspaper articles in her piece, Gigi explained how the articles do not reflect the center of her piece.

“The majority of these articles only focus on the economic ramifications that these issues pose and fail to address the human rights violations that citizens of these countries face when fleeing their homes,” Gigi said.

Choices that an artist makes can create a different outcome of a piece, share different messages, and promote various interpretations about a piece’s direction and design.  Gigi discussed how her artistic choices framed a new understanding of the message she is trying to convey.

“I chose to depict the woman wearing the Niqab in greyscale in order to show her lack of voice and to put an emphasis on the melancholy that one might feel when being forced to leave their home country in order to escape ongoing violence,” Gigi said.  “Additionally, it demonstrates the women’s lack of voice which is an issue faced by many in these countries due to censorship of the media.  This piece also places an emphasis on the emotional and human aspects of the woman and how she might be feeling in a situation where she no longer has self-autonomy or a place to call home.”