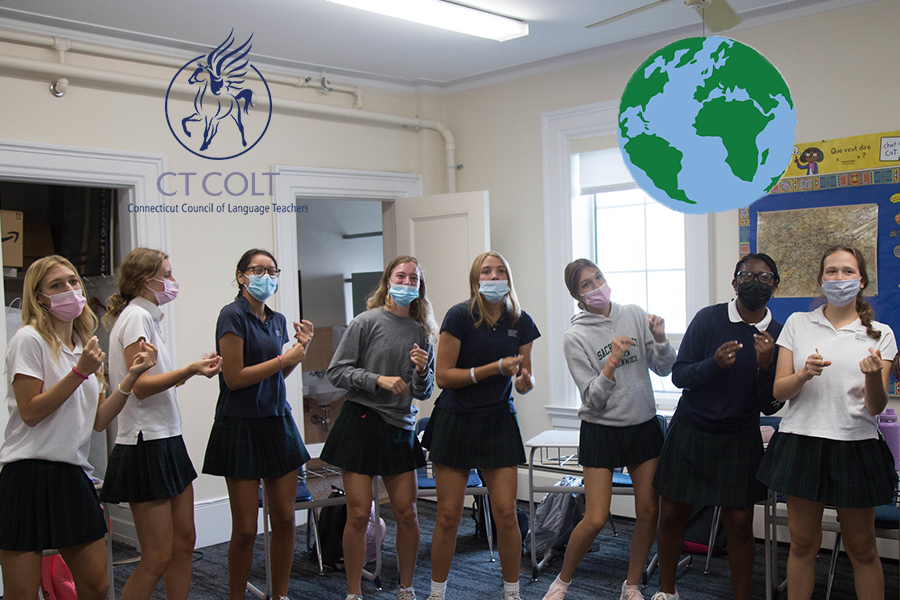 Students competed according to proficiency level and type of speaker.  Heritage speakers and students of the same language competed in different categories.  During the contest, students recited their poems and listened to their peers’ renditions of famous poems.  Students worked with teachers to choose which poem to perform and practice before the contest.  After the contest, students received scores and feedback on their delivery from a judicial panel.  Judges graded students in four different categories, including memorization, diction, interpretation of the poem, and body language.  Medal awardees met or surpassed the minimum score of 56 points.

World language study stresses communication, culture, and celebration while encouraging respect for others and expanding one’s worldview, according to ung.edu.  The Connecticut Council of Language Teachers aims to foster interest in world language and culture through the COLT Poetry Contest, according to ctcolt.org.  Poems are beneficial to world language learning as they immerse the reader in a new world and introduce them to foreign communities, social justice issues, and global challenges, according to edutopia.org.

Mrs. Williams believes the COLT Poetry Contest makes world language accessible to students with varying degrees of proficiency.  As poems range in difficulty and length, it is easy for students to find a poem that meets their current level and also allows for the acquisition of new skills, according to vistahigherlearning.com.

“This contest is important for many reasons,” Mrs. Williams said.  “Not only does it open the students up to poetry in the target language, but it provides a goalpost for them to strive for: to compete in and win a contest.  Poetry is an excellent way to learn many aspects of a language: new vocabulary, rhymes, themes, and cadences.  Most importantly, it is an excellent tool to learn pronunciation.  Focusing on one poem can help students to master the pronunciation of words in the target language and then bring that mastery of those words and sounds to their everyday speaking.”

Gigi recited “Ai Quem me Dera” by Vinicius de Moraes for the High School Heritage Portuguese 11-12 category and “مدرسة الحب” by Nizar Qabbani for the Arabic Level Three category.  She competed in her first contest in seventh grade and continues to participate because of her love of languages and forging connections with diverse groups of students.

“I like participating in the COLT poetry contest because it allows me to become more in-depth in my own culture as well as the Arab culture,” Gigi said.  “As a native Portuguese speaker, the opportunity to recite poetry in Portuguese allows me to become more active in my community through the variety of poems I hear and create connections with the other native speakers at the contest through these poems.  As I am meeting other students who are also learning Arabic and while I listen to their poem recitations, I am able to find commonalities between our learning experiences and cultures.”

Kayla has attended the contest for five years and enjoys how the poems deepen her appreciation for the beauty of the French language.  Kayla recited “Femme Noire” by Léopold Sédar Senghor for the High School Five to Six Level.

“As is true with all poetry, the poets are meticulous and extremely creative with the choice of their words and rhythms,” Kayla said.  “Over the years, I have progressed on my path to fluency by learning how French words flow together and different contexts in which the words can be used.”

In past years, Connecticut schools hosted the participating students for the full day.  They offered opportunities for the students to further interact with their peers and target languages through cultural presentations and games.

“When the competition was in person, each school came up with creative ways to bring students across all languages together,” Kayla said.  “The first time I went, in 2017, we played human bingo, so we had to find people from other schools that fit the prompts with the boxes.  I made a few friends that day, one of whom I kept in touch with for a little while.”

“I believe that when the students come together and see students from other schools, who have been working toward the same goal absolutely strengthens the community of language learners,” Mrs. Williams said.  “Those of us who have a penchant and passion for languages love to meet others who share that joy in learning a language.  Communication is the cornerstone of any interaction; and language is the key to communication.”