Lace up the skis and skates 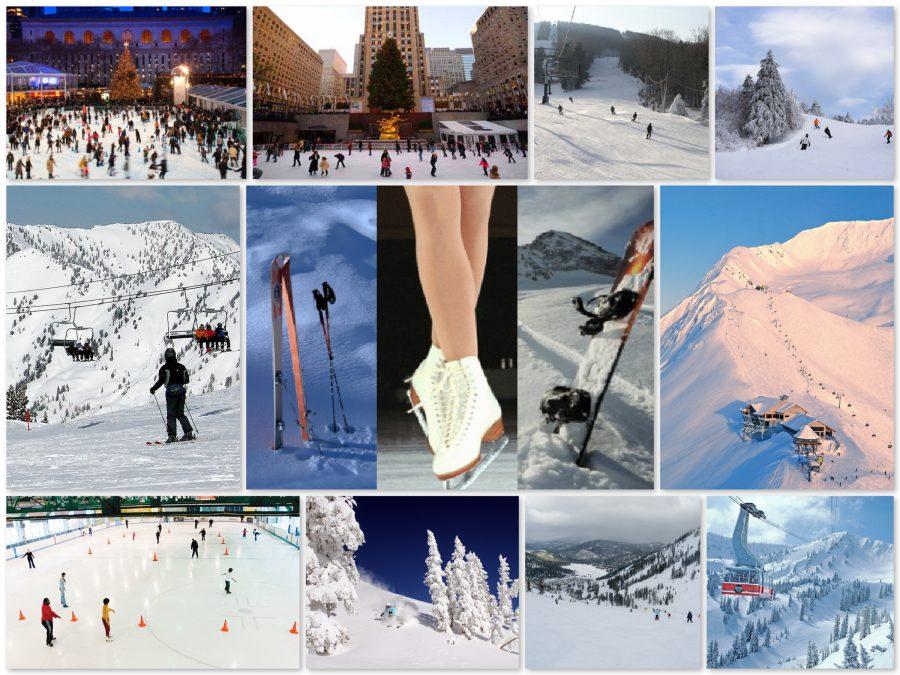 Winter break brings the opportunity for cold-weather fun. Skiing, snowboarding and ice skating venues, both near and far, provide cold cheeks and warm times spent with friends and family.
According to Forbes magazine, the top five places to ski this winter are Jackson Hole Mountain Resort in Wyoming, Snowbird in Utah, Alta in Utah, Alyeska in Alaska, and Squaw Valley in California.


Ski Magazine ranks Jackson Hole Mountain Resort as the number one  ski resort for 2014. The resort offers skiing, snowboarding, heli-skiing, and snow kiteboarding. Heli-skiing is a more adventurous version of skiing where the skier is transported up a mountain via helicopter in order to ski on off-piste terrain. Kiteboarding, also known as snowkiting, is an activity in which the participant uses wind power from a large kite to glide across the snow on a board. Due to the rapid snowfall of at least 10 feet thus far, Jackson Hole has perfect conditions for heli-skiing or kiteboarding.
Snowbird, a resort in the Rocky Mountains in Salt Lake County, Utah, offers skiing, snowboarding, night skiing, and other snow-related activities.
Snowbird shares a canyon with Alta, another popular ski resort. With over 116 trails, Alta is acclaimed for its variety of beginner, intermediate, and advanced terrain.  It is one of three ski resorts in the United States that prohibits snowboarding.
Similar to Alta, Squaw Valley in California is also recognized for its 3,600 acres of  diverse terrain. Offering night skiing, ice-skating, mini snowmobiling, and snow tubing, it is one of the top tourist ski resorts on the West Coast, second only to Alyeska.
Located in Alaska, Alyeska Ski Resort receives an average of 650 inches of snow per year. A 12 hour flight from Connecticut, this resort is not ideal for families on the East Coast wishing to minimize traveling time this winter.
For those interested in staying close to home this winter, multiple winter resorts are located on the east coast, just a few hours drive from Greenwich, Connecticut.
Located in Vermont, the Okemo Mountain Resort is just three hours from central Greenwich. It currently has 97 out of its 120 trails open for the 2013-2014 ski season. A popular family resort, it hosts competition programs and a recreational ski race program for children who dream of becoming competitive skiers and snowboarders.
90 miles south of Okemo is Jiminy Peak in Hancock, Massachusetts. The resort has 45 trails and nine lifts, including one six-person lift. It currently has 29 trails and 4 lifts open.
For those who do not wish to ski or snowboard this season, ice-skating is an alternative activity for all ages.
The most renowned skating rink in the northeastern region is the rink at Rockefeller Center in New York City, New York. Built by Rockefeller Center’s managers in 1936 as a temporary fixture, the rink became permanent, and has allowed locals and tourists to enjoy it for the past 77 winters. Stretching 122-feet long and 59-feet wide, the rink accommodates a maximum of 150 people.
Another place for ice-skating adventures is Chelsea Piers. With locations in both New York, NY, and Stamford, CT, Chelsea Piers offers indoor skating throughout the fall and winter seasons. Individuals of all levels and ages are invited to take lessons or skate for fun for $10 admission, and $5 skate rentals.
Bryant Park in New York City, New York, is offering free admission ice-skating from November 1, 2013 until March 2, 2014.  The rink is open every day, including holidays, and offers skate sharpening, lessons, and skate rentals.  It also hosts skating shows, private events, and has a parka lounge for parties.
Whether it is skiing, snowmobiling, tubing, or ice-skating, these resorts and rinks offer various ways for families to enjoy their winter break this Christmas season.
– Alana Galloway, Staff Writer