Pope Francis is Time's 2013 Person of the Year 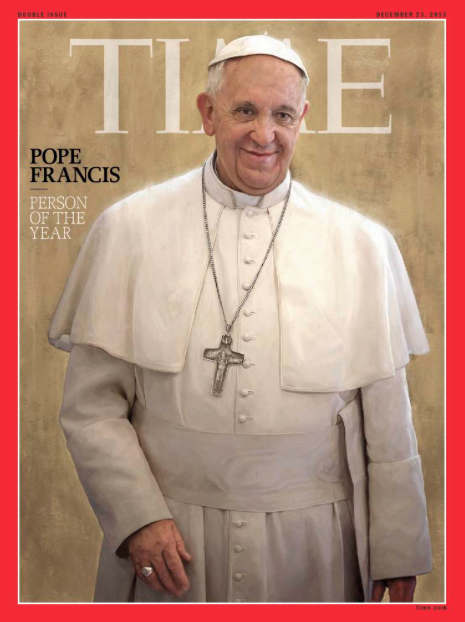 Pope Francis was named Time Magazine's 2013 Person of the Year because of his ability to capture the imagination of millions of Catholics worldwide. Courtesy of time.com


Time magazine’s decision to make Pope Francis Time’s 2013 Person of the Year demonstrates the pope’s newfound popularity and influence. Although he has been in the papal office for less than a year, Pope Francis has captured the attention of Convent of the Sacred Heart students and mainstream media alike.
Pope Francis, formerly known as Jorge Mario Bergoglio, was born into a strict Catholic family in Buenos Aires, Argentina. Despite his pious family, Francis describes his calling to the priesthood as unexpected.

As he told Francesca Ambrogetti and Sergio Rubin in their 2010 book published in the US this year as Pope-Francis: Conversations with Jorge Bergoglio, his choice to join the seminary “surprised me, caught me with my guard down.”
Nevertheless, he pursued the priesthood with zeal, becoming an archbishop in 1998 and Pope in March 2013. His rise to the papacy marks the election of the  the first Pope from a non-European country in 1,200 years and the first Pope from the Jesuit order.
Mr. Daniel Favata, Upper School Humanities teacher, believes Francis’ unique background has already made an impact on his papacy.
“Francis’ emphasis on poverty is certainly related to his Jesuit roots. The Society of Jesus (the Jesuits) has long advocated as their corporate stance a ‘preferential option’ for the poor,” Mr. Favata said.
Mr. Favata finds Pope Francis’ choice to name himself after St. Francis of Assisi further reflects his focus on the underprivileged.
“Francis of Assisi embraced a life of radical poverty and ministered to the poor (Franciscans still do today), and Pope Francis wants to show that the Church, too, should both embrace poverty and have a preferential option for serving the poor.”
Sacred Heart junior Zsazsa Morel appreciates Pope Francis’ dedication to helping the less fortunate.
“He amazes me with how humble he is and how he is all about charity and helping the poor,” Zsazsa said. “Some people would think that the pope is trying to be wealthy but he gives that all away and just wants to serve the poor and the people.”
According to Time, besides emphasizing the Catholic duty to help the poor, Francis has taken steps to spread God’s word in novel ways.  He has posed for photos with female convicts, “selfies” with younger visitors and developed over 3 million followers on Twitter.
Pope Francis earned Time’s highest honor because of his ability to galvanize international Catholic populations through his humble and innovative actions thus far.
As Time reported, “what makes this Pope so important is the speed with which he has captured the imaginations of millions who had given up on hoping for the church at all.”
-Grace Isford, Managing Editor
Sources: