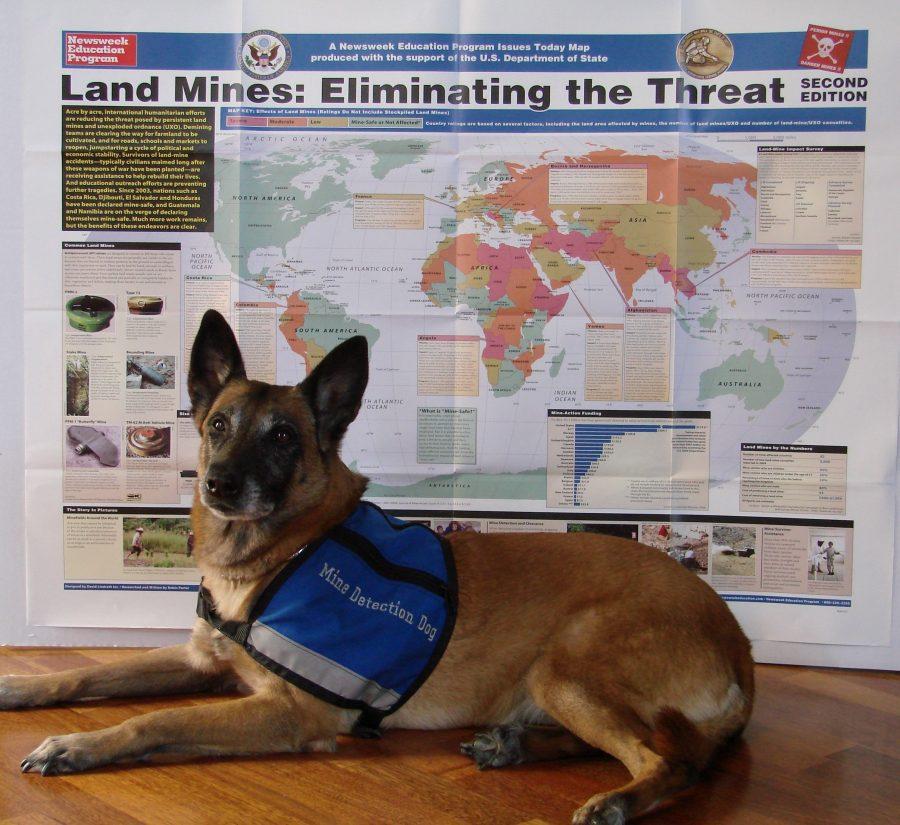 Senna, who was previously employed in the Mine Detection dog program, visited Convent of the Sacred Heart April 10 to help students learn more about the ongoing global battle against landmines. Courtesy of Kirsten Parkinson '15

Convent of the Sacred Heart students gathered in the theater Thursday, April 10, to meet Senna, a former Mine Detection Dog. Previously employed to locate land mines in different countries, Senna is one of the many canines trained by the Marshall Legacy Institute (MLI).


MLI, founded in 1997, is a nonprofit organization that aims to reduce the number of deadly land mines in previously war-torn countries. The group focuses its efforts in 24 different countries throughout the world, and offers three different programs which not only seek to help rid the world of land mines, but also spread awareness and assist victims.
Land mines are small explosive devices that are hidden just under the surface of the ground. The devices explode when they feel six pounds or more of pressure, often causing serious injuries and even death to anyone who may unknowingly step on one of these hidden land mines. While most of these land mines were planted many years ago, they remain active, killing an average of 15,000 to 20,000 people per year, according to un.org.
MLI’s Mine Detection Dog Partnership Program, launched in 1999, focuses on purchasing, training and donating mine detection dogs. These intelligent dogs can detect concealed, undetonated  land mines before they are set off.
While people often conduct personal land mine searches using metal detectors, the Mine Detection dogs are able to uncover land mines more efficiently and with a greater level of safety. While metal detectors are sometimes helpful, many land mines are made out of plastic and other substances that metal detectors cannot register.  Mine Detection dogs, however, can specifically smell the land mines, regardless of the composition material. This makes them much more accurate than metal detectors.

There are over 900 Mine Detection Dogs throughout the world, and MLI has donated 192 of them. In the past two years, their dogs have searched 14 million square meters of mine-contaminated land, according to marshall-legacy.org.

MLI also founded the Children Against Mine Program, otherwise known as CHAMPS, which gives children the opportunity to sponsor their own Mine Detection Dog. This year, junior Kirsten Parkinson and sophomore Catherine Keating founded a CHAMPS club at Sacred Heart.
“Catherine and I decided to start the CHAMPS club here at Sacred Heart after her brother started one at Brunswick. We wanted to re-involve Sacred Heart in CHAMPS, as there’s still so much to be done in regards to land mine removal,” Kirsten said. “Currently our goal is to spread awareness and hopefully attract some new members for next year.”
Kirsten has been involved in CHAMPS since her grandmother introduced her to the program in the third grade. Since then, she has been working to raise funds as well as land mine awareness.
“I was introduced to CHAMPS in third grade when my grandmother brought the CHAMPS team to my school to do a demonstration. I immediately fell in love with the cause, and felt compelled to take action,” Kirsten said. “That same year I decided to start a campaign for a land mine detection dog named Nutmeg. With the support of my classmates, family, and friends I was able to raise $20,000 by the beginning of fifth grade, and my dog is currently working to clear land mines in Lebanon.”
Thursday, April 10, CHAMPS representatives visited Sacred Heart and informed students on the issue of land mines and ways in which they could take action.

“The CHAMPS team was able to visit both the Middle and Upper schools at CSH recently, and we hope that the visit inspired other students to learn more about the issue of land mines,” Kirsten said. “Next year, I really want to start raising funds.”
Mine detection dogs cost $20,000, and prosthetics for land mine victims cost approximately $6,000, according to Kirsten. Both she and Catherine hope to raise enough money next year to help purchase a prosthetic limb for an injured child.
“I’m so happy CHAMPS visited Sacred Heart. I loved hearing about the organization, and the presentation was really interesting and informative,” junior Concetta Brusco said. “I didn’t know much about land mines previously, and the presentation really showed everyone how necessary it is to take action on this issue.”
-Anna Phillips, Co-Features Editor