Playing with the pros 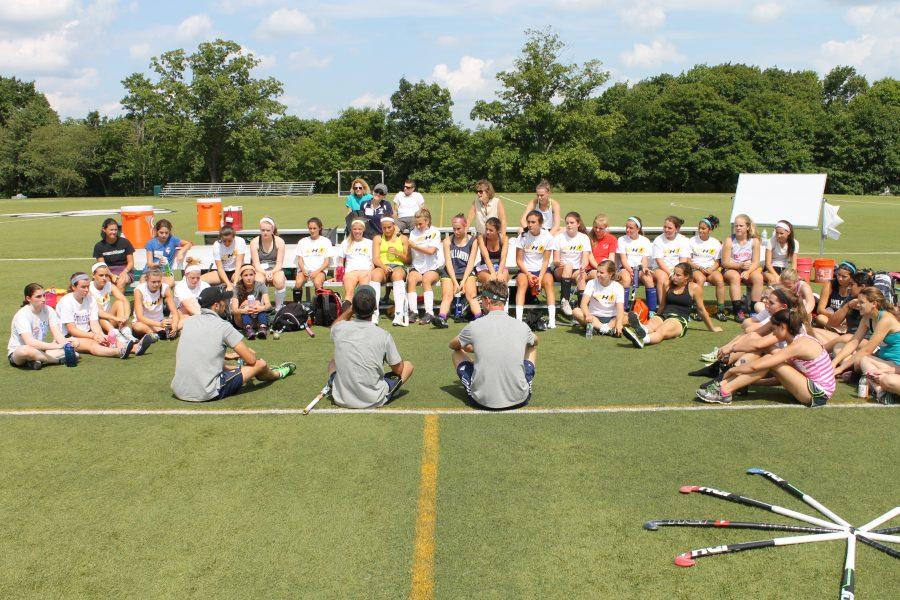 Convent of the Sacred Heart athletes strengthened their play with three world-renowned field hockey players during the Jamie Dwyer Hockey (JDH) Academy Field Hockey Clinic for high school and middle school players, Wednesday, August 6.
Professional sportsmen Jamie Dwyer, Mark Knowles and Jaap Stockmann hosted skills sessions at Sacred Heart’s Sheehan and Magnetti turf fields for girls in grades five through 12.
Australian native Jamie Dwyer is the founder of the JDH Academy. In addition to being named the world’s best field hockey player in 2004, 2007, 2009, 2010, and 2011, Mr. Dwyer also received a gold medal in the 2004 Athens Summer Olympics.
He co-coached the clinic with a fellow teammate, Mark Knowles.  Mr. Knowles and Mr. Dwyer played together on the 2004 Olympic gold medal team and the 2008 and 2012 bronze medal teams. Mr. Knowles also captained the 2014 Australian Kookaburra team this year.
These athletes helped adolescent players boost their offensive skills, while the third coach, Netherlands national goalkeeper Mr. Jaap Stockmann, helped players enhance their defensive and goal keeping techniques.
“I think that the clinic was awesome. They were clearly better than anyone had ever seen,” Director of Athletics Ms. Kelly Stone said. “I think that the girls were in awe of their skill.”


In the first session, girls learned trapping and shooting with Mr. Dwyer, defensive tackles with Mr. Knowles, and goalkeeping with Mr. Stockmann. After the lunch break, which doubled as an information session, the second training time began for older girls in grades nine through 12. These more advanced players focused on their complex offensive techniques, including dribbling, aerials and spins, as well as overhead passing and receiving.
“I had a great experience working with the professionals,” Sacred Heart varsity field hockey member sophomore Erin Snopkowski said.”I feel like I learned so much more, and am trying to work in my new skills this season.”
To conclude the day’s events, Mr. Dwyer, Mr. Stockmann and Mr. Knowles led a “Coach the Coaches” seminar explaining the Australian, European and South Asian styles of field hockey play and strategy.
“Those men play at a very elite level, so the techniques that they demonstrated is the direction field hockey is moving in,” Ms. Stone said.

Clinic attendee and organizer as well as Sacred Heart varsity field hockey coach Mr. Alexandru Gheorghe was instrumental in the preparation and coordination of the JDH Academy Field Hockey Clinic. Coach Gheorghe, who himself participated and coached for the Romanian National Team from 1997 to 2011, also works for the Rye Academy Field Hockey Club (Rye FHC), a program for U12, U14, U16, U19 and rising college level players. Rye FHC operates closely with JDH field hockey, as its president is a close friend of Mr. Dwyer’s.
Coach Gheorghe hopes that he helped to start a new tradition for Sacred Heart field hockey, and along with Ms. Stone, will work to ensure that the JDH Academy hosts another session on the Tigers’ turf next year.
“This was incredibly valuable for the girls and coaches. These guys are the best in the world. Jamie Dwyer, Mark Knowles and Jaap Stockmann represent field hockey at its finest and they took their time teaching on and off the field,” Coach Gheorghe said. “It’s both great field hockey and life lessons combined that made it such a valuable experience.”
– Sarah Jackmauh, Content Editor
Delete Image
Align Left
Align Center
Align Right
Align Left
Align Center
Delete Heading