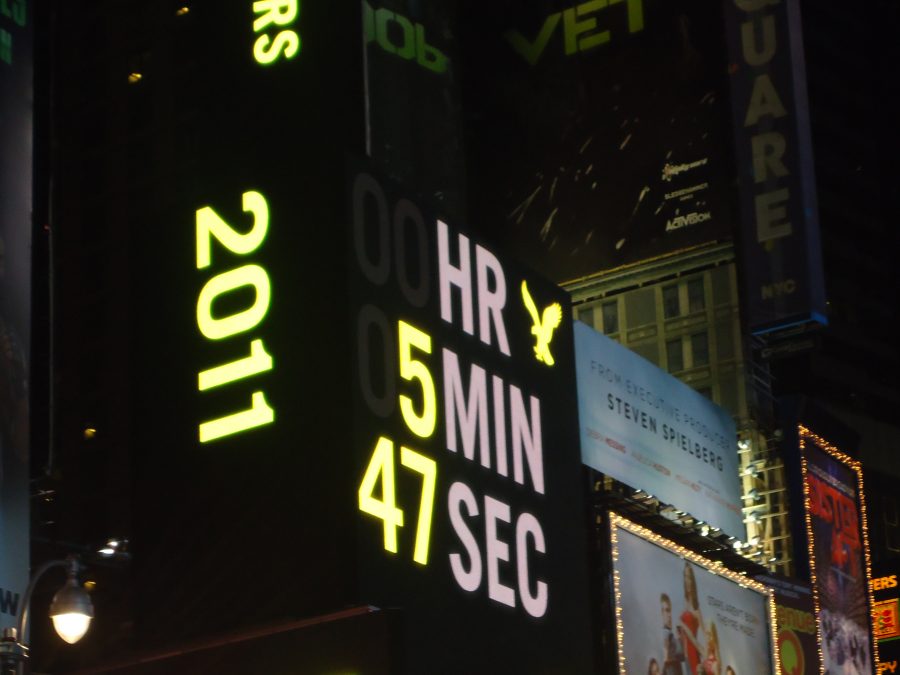 Sponsor American Apparel projects the final hours, minutes, and seconds as they are counted down in Times Square, New York, NY on New Year's Eve. Courtesy of Kensi Almeida '16.


If there is one thing that does not change about New Year’s in the city, it is the nationwide countdown with “Dick Clark’s Rockin’ Eve Special.” This year, however, the television special will have one momentous change to it, and that is a missing co-host.
Older audiences may remember Dick Clark from his show “American Bandstand” or the “Dick Clark Show.”
“They are from before he was on TV for New Year’s Eve. I used to watch a show called ‘American Bandstand,’ which came on in the late afternoon on school days,” Mrs. Whitton, Middle School history teacher, said. “Teenagers would dance to the latest music and there was always a famous guest.”
In 2004, Dick Clark suffered a severe stroke that left him with an impaired speech and a new co-host, Ryan Seacrest. In April 2012, he passed away from a heart attack.
“I felt sad when he died. He looked young [for his age] for a long time, and he was so brave to continue on TV after his stroke,” Mrs. Whitton said.
Ever since “Rockin’ Eve’s” early beginnings in 1972, it has grown to become the nation’s favorite televised countdown. It is America’s most popular venue to watch the yearly excitement of one ton of confetti raining down on Times Square or the idea of an 11,875 pound crystal ball dropping 70 feet,
In honor of Dick Clark’s death, Jenny McCarthy and Fergie will host a two hour program beginning at 8:00pm on ABC that will celebrate the highlights of his career over the past four decades. Then at 10:00pm, Ryan Seacrest will continue hosting “Rockin’ New Year’s Eve” with special guest performances including Carly Rae Jepsen, and Taylor Swift.
“I am sad that he died this year, but I liked that he was so dedicated and kept going on the the show even when he got really old. It will be so different watching the New Year’s eve countdown without him,” sophomore Abbi Wilson said.
Dick Clark’s passing will definitely affect millions of viewers this New Year’s eve. His indefatigable spirit will always be remembered.