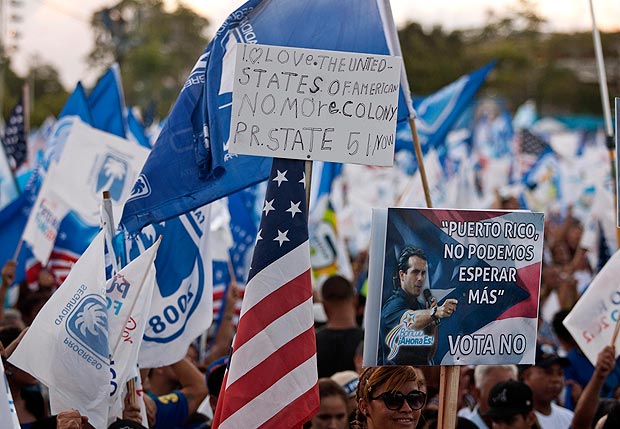 Puerto Rican citizens protest for statehood. courtesy of The Sun


This November, for the first time in 14 years, Puerto Rico held a vote concerning its political relationship with the United States.
According to politic365.com, the ballot asked voters two questions. First, did they wanted to keep the current “commonwealth” status of Puerto Rico? And second, choose from three non-territorial options: Independence, Statehood or Sovereign Commonwealth.
The results of the first part of the ballot were clear,by a slim margin. 54 percent of voters preferred to change the current territorial status of Puerto Rico. 62 percent of voters who answered the second question, voted for statehood.
Puerto Rico’s governor, Luis Fortuno, is currently urging Congress and President Barack Obama to honor the results of the vote, according to foxnews.com. Governor Fortuno commented that President Obama promised to respect the results of the vote and that he would take action if he saw a clear enthusiasm from the Puerto Rican people.

According to politic365.com, Jim Carney, White House Spokesman, spoke on the topic saying, “The results were clear, the people of Puerto Rico want the issue of status resolved.”
It is still not known whether President Obama will push for legislation that will open up options for Puerto Rico to become a state. Although the concept of having a fifty-first state seems unlikely, it is definitely up for consideration.
Co-chairs of the President’s Task Force on Puerto Rico, David Agnew and Tony West, said that they “will work with Congress to provide the people of Puerto Rico a clear process that would establish ways that Puerto Ricans could determine their status.”
In an interview with The Huffington Post, Puerto Rico pop singer and actor, Ricky Martin said, “Us Puerto Ricans must go and practice our democracy and let our voice be heard…We have a voice. And apparently we were very loud.”