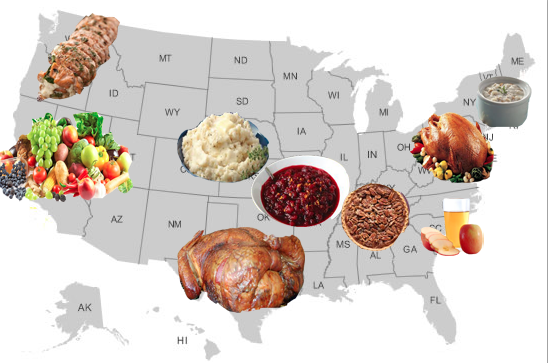 Although Thanksgiving is a distinctly American holiday celebrated across the states, and by various religions and ethnicities, many are unaware of the different regional influences on the traditional feast within national borders.
Thanksgiving began as a celebration of the European settlers and Native Americans’ first successful harvest. Depending on where they live in the country, modern Americans place a twist on the inaugural Thanksgiving meal, which according to usembassy.gov, originally consisted of turkey, duck, venison, pumpkin and squash.
According to epicurious.com, New England has kept more traditional, savory values in the meal with glazed turkey, apples, brown bread stuffing and the ever-popular pumpkin pie. Those in Boston may enjoy a bowl of clam chowder, and in Vermont diners will most likely serve molasses syrup on anything their customers consume. Mid-Atlantic residents also tend to cook a more traditional meal with the signature turkey, pumpkin pie and apple cider.
At Convent of the Sacred Heart, students and faculty celebrate Thanksgiving together days before break during a now traditional classic New England Thanksgiving lunch with turkey, mashed potatoes and vegetables.
Meanwhile, Midwesterners value their connection to farming, preparing meals that feature regionally-harvested potato dishes, apples, cranberries and wild rice.
“For Thanksgiving, I bake peppermint bark and my family and I eat a traditional Thanksgiving meal with turkey, mashed potatoes, and stuffing,” freshman Olivia Monahan from New York said.
Down South, stuffing has a different name and taste. According to history.com, Southerners call their stuffing “dressing” and often include regional staples like cornbread or biscuits.
Texans have developed the Turducken, a de-boned chicken stuffed inside a de-boned duck stuffed inside a de-boned turkey.
“Because my mom is from the South, we have a lot of deep fried turkey, pecan pie, cornbread dressing, collard greens, grits, and biscuits with tomato gravy,” sophomore Erin Carroll said.
Western chefs combine southern and northern flavors to perfect their Thanksgiving feast. Californian dishes, on the other hand, tend to include more year-round produce such as fruits and vegetables, given the climate. In the Northwest, dishes often involve Pacific salmon according to epicurious.com.
Thanksgiving can be celebrated and enjoyed by all regardless of religious or ethnic background. Families still gather to give thanks and gratitude just as the colonists did on the first Thanksgiving, but this annual feast has become as varied as the melting pot of America itself.
“I have relatives in Texas and California who come to spend Thanksgiving with my family in New York,” junior Colleen DeConcini said. “I love spending Thanksgiving with them because everyone makes different dishes that we all enjoy eating together.”
– Alessia Barcelo, Staff Writer
Delete Image
Align Left
Align Center
Align Right
Align Left
Align Center
Delete Heading