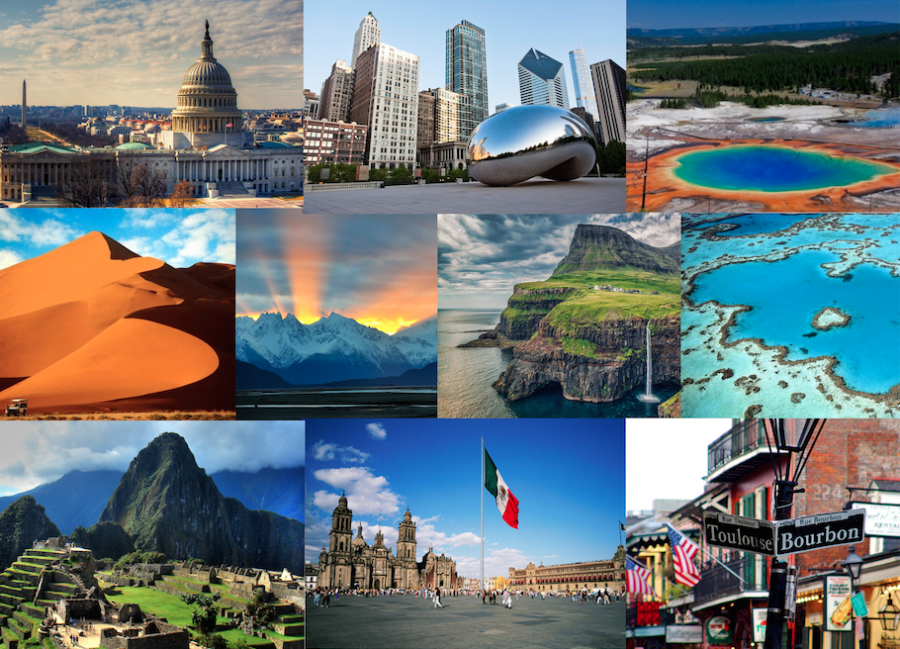 Convent of the Sacred Heart students hope to pursue a variety of resolutions and enhance their knowledge by exploring different cultures in 2015. These travel opportunities enrich the knowledge of the Sacred Heart photographer, explorer, historian and astronomer.
Close to home, Washington, DC, remains a historical yet contemporary city rich with museums, art, dance and music.  Eighth-grade students visit this political center for a three day trip annually and explore the city’s monuments as well as the United States Holocaust Memorial Museum. According to nationalcherryblossomfestival.org, late March is an optimal time to visit as springtime welcomes the blossoming of 3,000 cherry trees that Japan gifted to America in 1912.
Chicago, 700 miles west of Washington, DC, is the third most populous city in the country and the center of economic activity in the Midwest. Historically known for its immigration and industrial entrepreneurship, the city currently features modern architecture, design, parks and museums. Willis Tower is the country’s tallest building and a crowd favorite. Other locations for Sacred Heart students to visit include Cloud Gate, also known as “The Bean,” at Millennium Park and Sacred Heart network school, Josephinum Academy.
Due 926 miles south of Chicago, New Orleans, Louisiana, is the birthplace of Jazz and is well known for its music and culture.  According to neworleansonline.com, Bourbon Street remains a popular for its local creole food, especially during Mardi Gras festivities. Eight Sacred Heart juniors and sophomores, along with faculty members Mrs. Lori Wilson and Ms. Lindsay Thompson, engaged in service and reflection January 17 to 24 while working to rebuild houses destroyed by Hurricane Katrina in 2005.
“Their culture is very unique.  For example, Mardi Gras is a very important holiday for them and schools even have a week off.  There is also a huge sense of southern hospitality and since Hurricane Katrina, the people have really been brought together and act like one big family,” junior Alana Maguire said.
For travelers seeking colder climates, look no further than the largest US state, Alaska.  According to alaskaphotographytours.com, Alaska is a photographer’s paradise given its vast swaths of undeveloped wilderness. For the Sacred Heart photographer, Alaska offers the opportunity to put landscape and perspective skills into practice. Commercial cruises are very popular among visitors and allow for impressive glacier views. The summertime temperatures help reveal Alaska’s rugged terrain and allow travelers to witness the Aurora Borealis, commonly known as the Northern Lights.
“Going on a cruise definitely changed my view of the state. I got to experience Alaska’s breathtaking landscapes, small towns and tried new activities that I would have never envisioned,” junior Colleen DeConcini said.
Another popular national destination is Yellowstone National Park, located in Wyoming’s Red Desert. Yellowstone is home to more than 350 wildlife species and some of the most visually fascinating natural wonders according to nps.gov. Exploring America’s premier national park offers a geological adventure as visitors tour geothermal geysers, including Old Faithful, volcanoes, springs and petrified forests.
“I loved connecting with nature, and the opportunity to see the geysers was truly a once in a lifetime experience. I would definitely travel back to Yellowstone in the future,” junior Jacqueline Golden said.
Visitors seeking chilly climates, hiking and wildlife may enjoy a visit to the Faroe Islands, a group of 18 islands strewn between Iceland and Norway. They have have been ranked as the Readers’ Choice Winner destination this year by nationalgeographic.com.  The islands are also renowned for their cosmic beauty, which Sacred Heart students can witness at the Observatory on Thursday nights, as they will be few of the only places on Earth to observe a complete solar eclipse, March 20.
For those willing to take a dive below the Earth’s surface rather than exploring the cosmic world miles above sea level, the Great Barrier Reef off the coast of northeastern Australia offers an aquatic paradise. The living coral provides a subsea world for adventurous divers that stretches over 100,000 square miles, according to nationalgeographic.com. While visiting Australia, stop by Bondi Beach and Sacred Heart network school, Kincoppal Rose Bay, located in the eastern suburbs of Sydney.
Travel from the depths of the ocean to 8,000 feet above sea level and explore Machu Picchu in Peru. Perched on a mountain range, Machu Picchu requires a day trip of hiking through an environmentally fragile region that is at risk for earthquakes and landslides. The challenging terrain offers a rare glimpse into the grand ancient empire of the Incas. The Sacred Heart network school in Lima, Colegio Sagrado Corazón Sophianum, is another place to visit while in Peru, or even on a student exchange.
“While in Peru on exchange I really enjoyed seeing how the Peruvians preserve their historical pyramids and places, which makes it even more beautiful and special,” senior Catie Capolongo said.
For those interested in archaeology and anthropology, another desirable location is Mexico, which is also riddled with ruins of ancient civilizations. Mexico offers an array of travel options ranging from beaches to ancient Indian ruins and modern cities. One of the largest tourist attractions, the ancient city of Teotihuacan, stands outside of Mexico City and is home to the Aztec pyramids. Before leaving Mexico City for the beaches of Cancun, Tulum or Acapulco, tourists should visit the renowned early civilization National Anthropology Museum.
Whether exploring the world on land or water, members of the Sacred Heart community can embark on new adventurous opportunities in the new year.
– Alessia Barcelo, Staff Writer
Delete Image
Align Left
Align Center
Align Right
Align Left
Align Center
Delete Heading