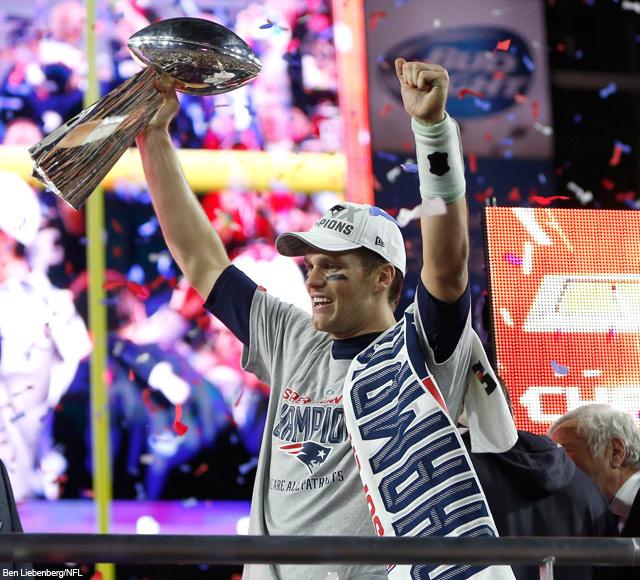 
The New England Patriots took home the title of Super Bowl XLIX champions February 1 at Phoenix Stadium after defeating last year’s Super Bowl champions the Seattle Seahawks 28 to 24.
The Patriots had a victorious season, with 12 wins and 4 loses. They earned their ticket to Super Bowl XLIX by defeating the Indianapolis Colts 45 to 7 in the American Football Conference (AFC) Championship.
The deflated ball controversy from the AFC game hovered over the Patriots franchise throughout the week leading up to the Super Bowl. According to ibtimes.com, the Patriots were blamed for having one of the 12 required balls weigh 2 pounds per square inch below the league’s minimum requirement of 12.5 to 13.5 pounds.
Reporters still attempted to get Patriot Head Coach, Bill Belichick to comment on the scandal after the Super Bowl win.
“I don’t have any other comment on that,” Mr. Belichick said in a postgame interview according to nbcnews.com. “I’ve twice gone into great detail about everything I knew. I’ve tried to be totally transparent and given everybody as much info as I have. That’s all I have to give.”
On the other side of the bracket, the Seattle Seahawks beat the Green Bay Packers 22 to 28 during the National Football Conference (NFC) Championship with a touchdown in overtime to advance to the Super Bowl. The team also finished the football season with 12 wins and 4 loses.
The Super Bowl results came down to the performance of the Patriots’ offense against the Seahawks’ defense. According to The New York Times, New England joined two other teams as the only Super Bowl participants to average 40 points per playoff game. Seattle’s defense also made history by becoming one of two defenses to allow fewer than 20 points a game during the playoffs.
According to NFL.com, defense was crucial in the Seahawks 2014 Super Bowl win.
“They won a Super Bowl last year because their defense was significantly better than any offense they played in the playoffs,” National Football League Media analyst Mike Mayock said during the NFL NOW’s postgame show.
This year, the evening began when the stadium had a moment of silence to remember the co-owner of the New York Giants and long time benefactor of Convent of the Sacred Heart, Mrs. Ann Mara, who passed away on Super Bowl Sunday.
“We are saddened by the loss of Ann Mara and our prayers go out to our dear friends, the Mara family,” close family friend to the Maras, Giants fan and Sacred Heart parent Mr. Arthur Schwabe said. “She will be remembered and honored at Super Bowls to come not only because of the day she passed but also because of her contribution to the NFL and the NY Giants.”
The game was scoreless during the first quarter, and it was not until nine minutes and 50 seconds into the second quarter that Patriots Wide Receiver Brandon LaFell scored a touchdown resulting in a 7-0 lead for the Patriots.
At halftime, the score was tied at 14 to 14 when Katy Perry took the stage. She performed some of her biggest hits including “Roar,” “Firework,” “Teenage Dream,” and “California Girls” with other musicians such as Missy Elliot and Lenny Kravitz.
She performed in four different costumes, including a golden dress covered in red and yellow flames, a colorful beach-ball themed dress, a customized football jersey and a silver gown covered in holographic stars that glimmered as she was hoisted into the air during “Firework.”
The Seahawks dominated the third quarter with one touchdown and a field goal. However, during the final minutes of the fourth quarter, Patriots Cornerback Malcolm Butler made a game winning interception securing a fourth Lombardi trophy for the team.
“The last play we had a formation where we could throw it on them,” Seattle Seahawks Quarterback Russell Wilson said according to The New York Times. “Lockette was coming underneath and the guy made a great play. I had a chance, was looking, and then he kind of cut in front of me and made a play. I thought it was a touchdown, honestly. When I let it go, I thought it was going to be game over.”
Aside from two interceptions, Tom Brady completed 37 of 50 passes for a total of 328 yards and made four touchdown passes. With this performance, he won his third Most Valuable Player (MVP) award. He now ties with Pro Football Hall of Famer Joe Montana for the most MVP awards in the NFL according to ESPN.com.
“I felt like we were going to win the whole game, and then they made that catch. Then I had a little bit of doubt. Then we made a great play,” Patriots Quarterback Tom Brady said according to nbcnews.com. “We’ve been on the other end of some great catches and not being able to finish it out. This time we made the play.”
-Cori Gabaldon, Staff Writer
Delete Image
Align Left
Align Center
Align Right
Align Left
Align Center
Delete Heading