Words of inspiration and songs of faith 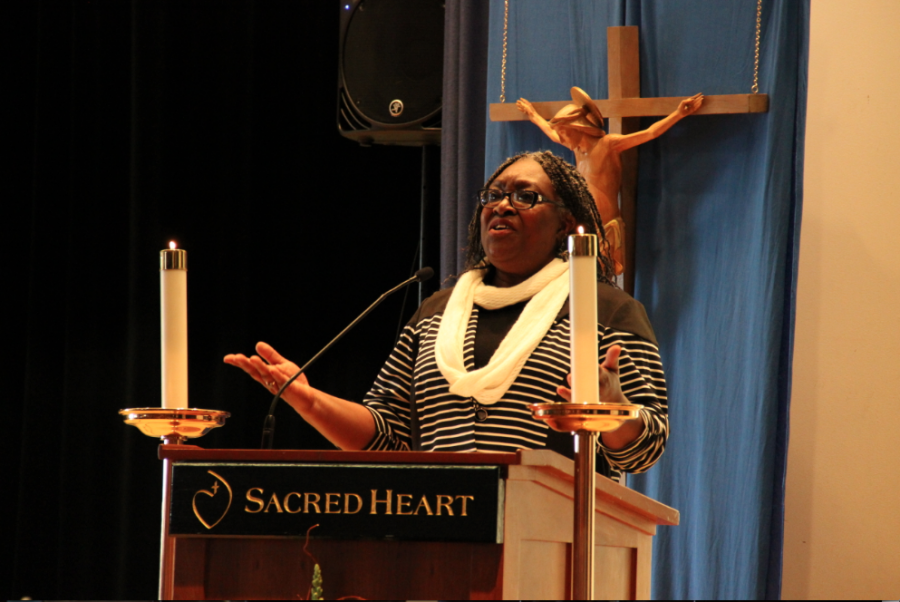 In addition to celebrating the legacy of Dr. Martin Luther King, Jr. with Convent of the Sacred Heart today, civil rights activist Ms. Lulu Westbrooks-Griffin shared the story of her unfair arrest in the segregated Southern society of 1963. Gabby Giacomo '15


Civil rights activist Ms. Lulu Westbrooks-Griffin spoke to the Convent of the Sacred Heart community today to honor the legacy of Dr. Martin Luther King Jr. during the school’s annual prayer service. The celebration also commemorated the fiftieth anniversary of the 1965 Voting Rights Act.
Ms. Westbrooks-Griffin was a member of the Student Non-Violent Coordinating Committee (SNCC), a student-run organization founded in 1960 that participated in sit-in protests during the Civil Rights movement.  In 1963, police arrested Ms. Westbrooks-Griffin at age 12 for protesting against segregation alongside the SNCC in her town of Americus, Georgia.
Following her arrest, Ms. Westbrooks-Griffin was one of 32 people held in a rudimentary stockade in Leesburg, Georgia. Her cell had no mattress or blankets and the only source of water came from a dripping shower head. After University of Chicago history teacher Mr. Danny Lyon exposed the girls’ maltreatment through a series of photographs, Congress ordered the girls’ release after 42 days of imprisonment.
Ms. Westbrooks-Griffin’s older brother James, who was a college student at the time of her arrest, influenced her to fight for change. The injustices Ms. Westbrooks-Griffin and her brother encountered compelled them to make a difference.
“We didn’t have the proper books, educational tools, we were separated by segregation, our school was old and we were receiving books from the white kid’s schools from years before. We felt that it was very unfair,” Ms. Westbrooks-Griffin said. “So we did what we had to do in order to make a change and we fought for what we be believed in.”
Over 30 years after her imprisonment, Ms. Westbrooks-Griffin began to share her story. She started talking at schools, churches and other events and eventually teamed up with filmmaker Mr. Travis Lewis to tell her story via film. They traveled throughout Georgia to reconnect with other girls who also experienced the brutalities.
During the celebration, Ms. Westbrooks-Griffin spoke about her story as featured in the documentary Lulu and the Girls of Americus. The film recounts Ms. Westbrooks-Griffin’s experience with a group of other young girls her age in the stockade building. Ms. Westbrooks-Griffin hoped to inspire Sacred Heart students through her speech and encouraged them to enact change in their local communities and beyond.
“Knowing that the young ladies will leave my speech knowing that, as long as [they] live in this world, [they] have a calling,” Ms. Westbrooks-Griffin said. “[They] have to carry the torch.”
In addition to Ms. Westbrooks-Griffin, the Sacred Heart community welcomed Congressman Jim Himes and his wife, Mrs. Mary Himes to the service. Annual guests, the GospelKnights and Vision Steppers, also excited the crowd with their energetic singing and dancing performances. At the end of the ceremony, members of the Class of 2015 joined the Steppers onstage and learned some of their dance moves.
“I loved the prayer service. There were some deep and inspirational moments, but the GospelKnights and the Vision Steppers made it really light and fun also,” senior ZsaZsa Morel said.
Due to the construction in the Dubois gymnasium Sacred Heart held two prayer services in the theater. One prayer service for preschool through seventh grade, commenced at 9:20 am, and another prayer service for eighth through twelfth grade began at 10:40 am.
– Jessica Johnson, Sports & Health Editor and Video Content Editor
[envira-gallery id=”38695″]