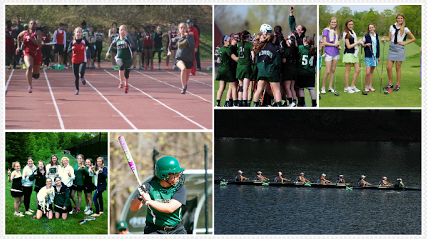 At the beginning of preseason Convent of the Sacred Heart spring sports captains share their goals for a victorious season.
Co-captains of varsity softball, seniors Caroline Burch and Gaby Lopez, hope to develop a strong team bond and welcome new members. The captains have noticed that in previous years, when the players grow close during the season, they have stronger communication on the field.
Gaby and Caroline also want to maintain positive attitudes and confidence despite tough competition. They believe that a good mental game is crucial to doing well on the field.
“We will stay positive, grow as a team, take every practice seriously, and beat the teams we can beat,”  Gaby said.
Similar to Caroline and Gaby, tri-captains of the crew team, seniors Stephanie Browne and Vanessa Raskin, and junior Aggie Ryan also hope to encourage team spirit.
All three captains have been brainstorming new ways to keep their team engaged and enthusiastic. They hope to have team dinners the night before every early morning regatta, make psych-ups an important part of race preparation, and create individualized goal cards for inspiration during races.
“At a regatta everyone will write an inspirational quote and pin it to the back of the rower in front of them. Then they can read it during the most difficult parts of the race to inspire them,” Aggie said.
This year’s tennis team captains, seniors Madeline Church and Corina Gabaldon, and juniors Madison Miles and Brooke Wilkens make up the largest captaincy Sacred Heart has seen in the past ten years.
“I am so excited that there are four of us. This way we will be able to divide the responsibilities, and someone will always be available to help,”  Madison said.
The four of them plan to spend individualized time with each player to improve the lineup and skill set. They hope that this will also create a strong team bond.
“I think that a strong team bond is extremely important both in and out of the competition, ” Brooke said. “When you are on a team with your friends it’s obviously fun, but when you have to branch out and play on a team with new people, it is really important to form a bond with them to improve your game, but also to make the team environment really fun.”
With the right motivation and dedication, the captains believe that the team can win the Fairchester Athletic Association Tournament, and then move on to the New England Championship.
In contrast with the four tennis team co-captains, senior Emily Casper is the sole captain of golf. Emily intends to approach the season with merriment and wit in order to keep a lively atmosphere on the course.
“I will keep the team motivated with really good jokes and lots of golf puns,” Emily said.
Emily has confidence that her team can win more tournaments this season than it has in the past, as long as everyone remains focused. Her main goal, however, is to create a comfortable environment.
“I want to make sure we all have fun together this season, because that’s what is important. Winning and losing do not matter as much as long as your team sticks together through it all,” Emily said.
Seniors Sarah Jackmauh, Grace McKenney and Ellie Denson are planning to bring the track and field team to a new level during its second year. Sacred Heart added track and field to the spring sport lineup during the 2014 season, and the captains plan to secure  the team as a respected and successful facet of the school’s athletic department.
“We want to establish it as a strong and competitive sport, but also as a fun team sport,” Grace said.
The captains hope to foster a sense of unity among runners and encourage athletes to take risks in the kinds of events they pursue.
“I want to work with the coaches and my co-captains to make sure that we push everyone, because in my experience, the only way to improve is by taking risks and pushing yourself to a point that you never thought you could reach, ” Sarah said. “My coach last year put me in a race that I never wanted to try, and it turns out that I qualified for New England’s in that race.”
Similarly, seniors Kate Burkett and Alice Millerchip, captains of the varsity lacrosse team, are excited to begin training for the spring season. They plan to encourage every player to work their hardest every practice so they can achieve the highest level of playing possible. Alice and Kate both want to create a positive atmosphere to steer them to victory.
“We want to play every game as it comes, and not worry about the opponent. We just need to play our game,” Alice said.
Along with this ideal, the captains want to instill in their team, a sense of family and spirit.
“We want to focus on encouraging the right priorities. We want our teammates to play for each other, not themselves,” Kate said.
While all the spring captains have individual strategies to launch their teams into a season of success, they all hope to foster a sense of unity and commitment.
-Elizabeth Bachmann, Staff Writer