Graduation dresses through the decades 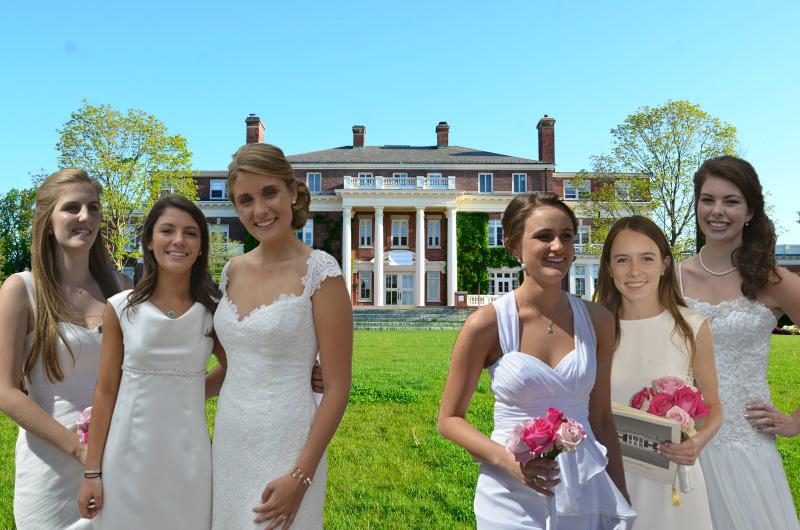 
Although Convent of the Sacred Heart Greenwich graduates have worn white dresses at their commencement for over a century, the dress styles, fabrics, and accessories have evolved overtime.
Sacred Heart graduates began wearing white dresses to graduation in the late 1800s. Throughout the twentieth and twenty-first centuries, puffy sleeves reduced to spaghetti straps, high necklines lowered to scoop necks, and elaborate up-do’s evolved to beach waves.
“As graduation comes closer I am beginning to realize that I am joining all the other Sacred Heart alumnae who have walked down in white dresses,” senior Alex Foley said.
Girls who graduated in the class of 1895 generally wore lace gowns with high necklines with big ruffled sleeves. Students always carried a small bouquet of red, pink or white flowers.
Sacred Heart graduation dresses over the years reflected the trends worn by famous actresses of the times, such as Elizabeth Taylor and Grace Kelly. Taylor’s 1950s dress from Father of the Bride emphasized the dramatic lacy necklines of the era. In 1956, Kelly’s wedding gown featured a lace bodice and thick satin skirt, which featured a smaller waistline.
In the 1970s, nearly every student wore an elaborate, ruffled dress. The dresses were mostly A-line and often had high necklines. Gowns in the 1980s were largely influenced by Princess Diana’s iconic wedding dress in 1981. The detailed Cinderella-style dress featured large puffy sleeves, embroidered lace, and layers of petticoats. Sacred Heart girls emulated this trend, wearing gowns with heavier material such as silk or satin, and opting for more of a bridal look.
At the end of the 1980s, however, the silhouettes of the dresses were drastically simplified. Many girls started wearing off-the-shoulder dresses and even a couple shorter lengthed dresses.
“Gowns start to be much less conservative, more individual and express a little more of their own style,” Convent of the Sacred Heart Greenwich Archivist Mrs. Victoria Allen said.
In the 1990s the new trend became more simplistic and A-line cut dress styles. The chest area also became more bare and open.
The class of 2000 dressed in simpler styles and in lighter fabrics such as chiffon or silk, with a more exposed chest and less of a bridal look. Today, graduating seniors often buy strapless dresses and have straps attached to be considerate of the elegance of graduation. Though all are encouraged to adhere to a simplistic look, many customize their outfit through their jewelry and hair.
Hairstyles also evolved over the decades. Traditionally, students would tie their hair back in decorative up-do’s to show off their face. Today, hairstyles are much simpler, less busy and more natural.
In the 1980s large pearls became very popular among the graduating classes. Many graduates today still wear classic pearl necklaces and a pair of pearl earrings.
White dresses have always been preferred to cream, as they traditionally symbolize purity.
Throughout the 1970s and 1980s, girls always wore heels. Today, the rules for shoes are very flexible ranging from high heels to white sandals to Jack Roger flats.
“Finding my graduation dress has really made reality set in, and I am beginning to realize that I am ready to move forward to college and life beyond,” Alex said.
Although graduation dresses have seen drastic style changes throughout the years, every Sacred Heart student will share in the long-lived tradition of wearing a white gown.
–Juliette Guice and Nadia Zuaiter, Staff Writers
Delete Image
Align Left
Align Center
Align Right
Align Left
Align Center
Delete Heading