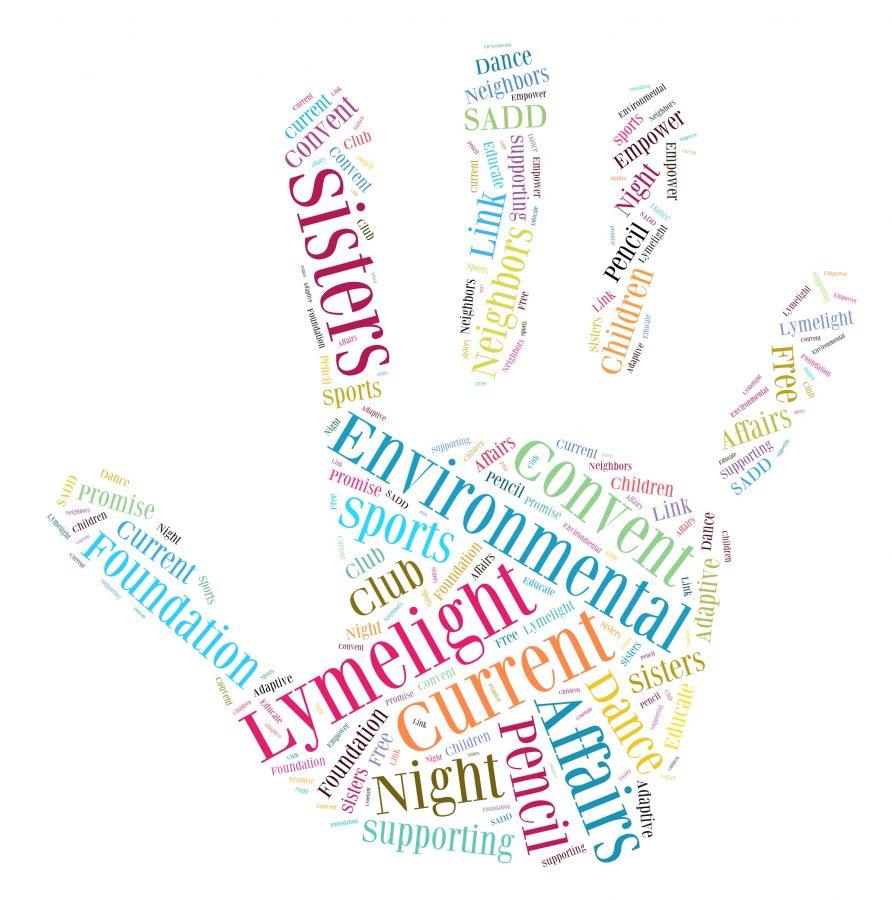 Sacred Heart club heads introduce diverse opportunities to students through an abundance of newly established clubs. Ranging from Dance club to Current Affairs club, they all offer charitable and educational opportunities to their members.
Students need to make a proposal that includes the club’s purpose and its history at Sacred Heart, as well as a PowerPoint slide outlining the club’s goals. Head of the Upper School Mrs. Jayne Collins, and Dean of Students Miss Karen Panarella must approve all club proposals. Two days after submission, Miss Panarella posted the list of approved clubs on the Club Bulletin Board.
Juniors and co-heads of the Lymelight club Katie Danahy and Kate Gerstner, hope to raise awareness and funds for Lyme Disease research.
“We hope to help educate other people in the Sacred Heart community about this disease and how it is sweeping the East Coast, affecting more and more people each year,” Katie said.
Katie contracted Chronic Lyme Disease over the summer, which prompted her to create the club.
“I have had Lyme Disease for over a year and was unaware that I had it because of the inadequate testing that is available. Therefore, I kept showing up negative on the testing, and it began to attack my neurological system, ultimately diminishing my everyday functions. In addition, Kate’s grandfather had suffered from Lyme Disease as well, giving her an understanding of the impact this disease can have,” Katie said.
Juniors Jacqui Kaplan and Lindsay Ofori founded the Current Affairs club this year. Both students are very interested in International Relations and Foreign Policy.
“The absence of a club that promotes a safe, unbiased and even somewhat casual environment to speak on these issues is what inspired us to propose this club,” Lindsay said.
The club will use various news outlets such as CNN, Vice, BBC, and Al Jazeera to expose club members to global events that will inspire thought provoking discussion.


Junior Christina Weiler recently established the Environmental club at Sacred Heart. She hopes to inform club members about the importance of environmental awareness.
Christina plans to host several pen and utility drives throughout the year, in which students may donate pens and other recyclables.
Junior Courtney Smith started the Pencils of Promise (PoP) club to raise awareness about the global education crisis.
“At Sacred Heart we are lucky enough to receive a quality education in a safe and nurturing environment. I think that we forget sometimes that for millions of kids worldwide, access to education is highly limited. I want people to understand that education is a privilege, not a right. My club has set a fundraising goal of $500 by the end of the year with all proceeds going directly to PoP,” Courtney said.
Courtney currently fundraises for PoP outside of school, and her goal is to raise $25,000 to build an entire school.
Junior Kathryn Allyn instituted the Adaptive Sports Foundation (ASF) to increase awareness for adaptive sports. ASF celebrates the abilities of physically and mentally disabled children, rather than their disabilities, according to adaptivesportsfoundation.com.
Sophomores Caroline Finn and Maddie Squire created the Students Against Distracted Driving (SADD) club. During their first club meeting, club members took pledges to not text or drink while driving. The club hopes to host a guest speaker to raise awareness about distracted driving during the year.
“Distracted driving has become a huge problem, and needs to be addressed to a younger audience in order to lower the risk of distracted driving related accidents,” Caroline said.
Sophomores Kaitlin Edwardson and Magdalena (Magda) Dutkowska established the Free The Children club at Sacred Heart, which seeks to raise awareness and funds for global issues such as the lack of clean water and education.
Free The Children is one of the world’s largest organizations comprised of students helping students. Magda was a part of the club at her middle school, Saint Ann Academy, and knew she wanted to establish the same club at Sacred Heart.
“In middle school, my classmates and I in the club held many fundraisers such as car washes and bake sales, and raised enough money to build a school in Kenya. We also had the opportunity to attend many events where we met inspirational speakers, such as Spencer West and Craig Kielburger, the founders of Free the Children,” Magda said. “I, with four other students, were also able to go on a  trip to Kenya to build a school, spend time with the locals, and attend the opening ceremony for the school that we fund raised for. It was truly a remarkable and life-changing experience, which I would like to share with the Sacred Heart community.”
Co-heads of the Dance club, juniors Erin Carroll and Jodanna Domond, hope to give students the opportunity to connect through the art of dance.
“The ability to expose high school students to dance in a loving and nurturing community is significantly important to the prosperity and success of young growing girls,” Erin said. “Women of the Sacred Heart are guided to be mature and independent and we believe that dancing provides a standard of individuality as well as space for the expression of self.”
Junior Francesca Lippolis founded the Neighbor’s Link club at Sacred Heart. Neighbor’s Link is a mission based out of Mount Kisco, New York that aims to strengthen local communities by actively enhancing the healthy integration of immigrants, according to neighborslink.org. Its strategy is to educate, empower, and employ immigrant families and individuals who have been economically impoverished and educationally deprived.
“By volunteering at Neighbor’s Link, we would be making an impact not only on the mothers and children in the program, but on the entire Mount Kisco community. Volunteering at Neighbor’s Link gives the opportunity to many mothers to take ESL classes, and a chance for their children to complete educational activities. The Neighbor’s Link club plans on helping the organization accomplish their goal of successfully integrating these families in the community, by helping in the childcare room,” Francesca said.
Juniors Maddie McLane, Hanna Sheehan, Allie Massello, Haley Davis, and Maggie Davis created the Sisters Supporting Sisters club to raise awareness about domestic violence.
“We want to motivate young girls to stand up for themselves and know that they are capable of making a change,” Maddie said.
Seniors Kelly Heinzerling and Grace Passanante promote improvisation and comedy through their newly instituted Convent Night club. Both girls share a love for Saturday Night Live and comedy shows and wanted to bring their passion for comedy to the student body.
“We hope to perform at Talent for Tots and at Greenwich Hospital. We also want to make some funny videos for Morning Meeting,” Kelly said.
Juniors Deah Dushyanth and Fiona Cahill established the Educate and Empower club, which uses education to combat poverty and underdevelopment around the world.
“We are focusing on helping a school in India, as well as exploring ways to spread education to underprivileged and overlooked children in our own communities. We plan on fundraising, having supply drives, and video chatting with the children in India who need our support and constant encouragement,” Deah said.
– Mae Briody, Staff Writer
Delete Image
Align Left
Align Center
Align Right
Align Left
Align Center
Delete Heading