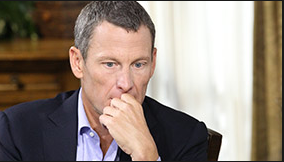 Lance Armstrong contemplates the motives behind his illegal doping practices during his interview with Oprah aired on the OWN Network on January 17 and 18 2013. courtesy of oprah.com

Lance Armstrong admitted to using EPO’s, blood transfusions, and testosterone to improve his cycling performance in a national interview on Oprah’s OWN Network on Thursday, January 17. His confession perhaps damaged both his reputation and career beyond repair.


While Armstrong confessed to illegal practices, the interview lacked the level  of contrition many were expecting from him. Travis Tygart, head of the United States Anti-Doping Agency (USADA) mentioned in an interview for 60 Minutes that Armstrong tried to gain sympathy through his televised interview.  Tygart and many others believe that if Armstrong was actually remorseful he would have privately confessed his actions to the USADA.
“Even though Lance Armstrong apologized for his actions, his apology didn’t seem genuine to me,” Convent of the Sacred Heart sophomore Kate Burkett said.
Armstrong also failed to precisely identify his doping practices in the cycling world and downplayed the sophistication of his own practices.
“I viewed it as very simple. There were things that were oxygen-supplying drugs that were beneficial for cycling,” Armstrong told Oprah.  “My cocktail was EPO, but not a lot, transfusions and testosterone.”
Armstrong attempted to make the viewer see a silver lining in his cheating scandal, and downplay the severity of his drug use, claiming to Oprah that he did not use any banned substances during his 2009 and 2010 Tour de France performances.
Some believe Lance Armstrong’s charitable contributions outweigh the negative effects of cheating. As noted in Bye Bye Armstrong, he founded and ran a highly successful charity, Livestrong, that has raised over 470 million dollars for charity.
“I think all the work he did for charity is good for society,” sophomore Kylinn Askew said. “Although he did take drugs, he did work for a cause that inspired a lot of people.”
The interview reached an emotional climax for Armstrong when talking about his 13-year-old son Luke, who had always been a strong defender of his father. Armstrong described to Oprah how difficult it was to tell his children, “Don’t defend me anymore” after years of shielding them from the truth.
For a majority of the general public, no matter what Armstrong does to prove himself, his actions can never be forgotten.
“I think he is a horrible role model because he let so many people down who instilled so much faith and hope in him,” sophomore Alexa DiTursi said.
The future for Armstrong remains bleak, as he has already been deprived of sponsors, fans and cycling privileges. While some supporters do remain in the wake of such a scandal, there are also many who now consider him a cheater.  Time will be the only test to see if Oprah Winfrey’s prediction for Armstrong that, “The truth will set you free” will come to fruition in the future.