Warming up to climate change 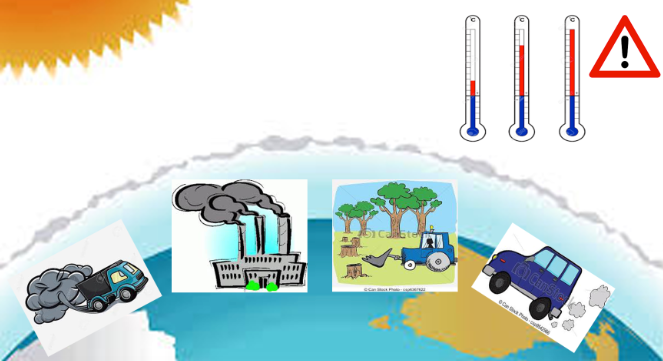 Scientists have recently revealed that the Earth’s average temperature has risen 1.4 degrees Fahrenheit over the past century and they predict that temperatures will continue to rise. Scientists say that climate change is an increasing problem that will have major consequences if the global population does not handle this situation immediately, according to epa.gov.
The Intergovernmental Panel on Climate Change (IPCC), which includes more than 1,300 scientists from the United States and other countries, says that the temperature will climb approximately 5.6 degrees Fahrenheit over the next hundred years, according to news.nationalgeographic.com.


One of the main reasons global temperatures have risen is the increase of greenhouse gases. Greenhouse gases wrap around the Earth, trapping energy in the atmosphere while warming the planet. This process is called the greenhouse effect and is an essential part of supporting life on Earth. Although this phenomenon is important, when excess gas is trapped in the atmosphere, it can be catastrophic, according to epa.gov.
According to climate.nasa.gov., the burning of fossil fuels, including oil and coal, creates greenhouse gases. People typically burn these fossil fuels in order to produce energy such as electricity. During agricultural processes, deforestation, and industrial processes, greenhouse gases leak into the atmosphere.
The most common greenhouse gases that contribute to global warming include carbon dioxide, water vapor, methane, and nitrous oxide, according to climate.nasa.gov.
According to climate.nasa.gov, in order to measure these greenhouses gases, scientists at the University of Edinburgh, National Aeronautics and Space Administration (NASA), and Wageningen University used a computer model to analyze where and how long carbon dioxide is stored in plants, trees, and soils.
Studies show that the atmospheric concentration of carbon dioxide did not rise above 300 parts per million (ppm) between 10,000 years ago and 1900. Today, the atmospheric concentration of carbon dioxide is at 400 ppm. The greenhouse gas has not reached this extreme amount in more than 400,000 years, according to climate.nasa.gov.
Global warming has detrimental effects on the environment such as floods, storms, droughts, heat waves, and wildfires. These effects can lead to even larger problems as time passes and global warming progresses, according to nature.org.
Polar ice caps have begun to melt due to the heat waves resulting from the greenhouse effect. Because of this, the global sea level has risen about 17 centimeters (6.7 inches) in the last century.
According to whitehouse.gov, power plants are the cause of one-third of greenhouse gases that permeate the atmosphere. As a result, the Environmental Protection Agency (EPA) developed carbon pollution standards for both new and existing power plants. This process is called the Clean Power Plan. If this plan functions properly, the agency predicts there will be a 30 percent reduction in carbon pollution from power plants by 2030.
In addition, President Obama has tripled the amount of solar electrical generation through supporting the use of windmills. By using windmills, not only is the amount solar electrical generation increasing, but less greenhouse house gases infiltrate the atmosphere, according to whitehouse.gov.
According to whitehouse.gov, the Obama administration has also proposed a set of fuel economy standards for passenger vehicles, commercial trucks, vans, and buses for model years 2014 through 2018. If motor vehicle companies meet these standards, the administration predicts to save over 500 million barrels of oil. Through the decrease of oil use, less greenhouse gases will pollute the atmosphere.
“The good news is that all around us people are responding with creative and innovative solutions to create a more sustainable way of life,” Upper School Science Teacher Ms. Amy Dillane said.
To help solve these problems relating to global warming, individuals can walk or bike to work rather than drive, and join local or state groups to support climate programs, according to epa.gov.
– Elisabeth Hall, Staff Writer
Delete Image
Align Left
Align Center
Align Right
Align Left
Align Center
Delete Heading