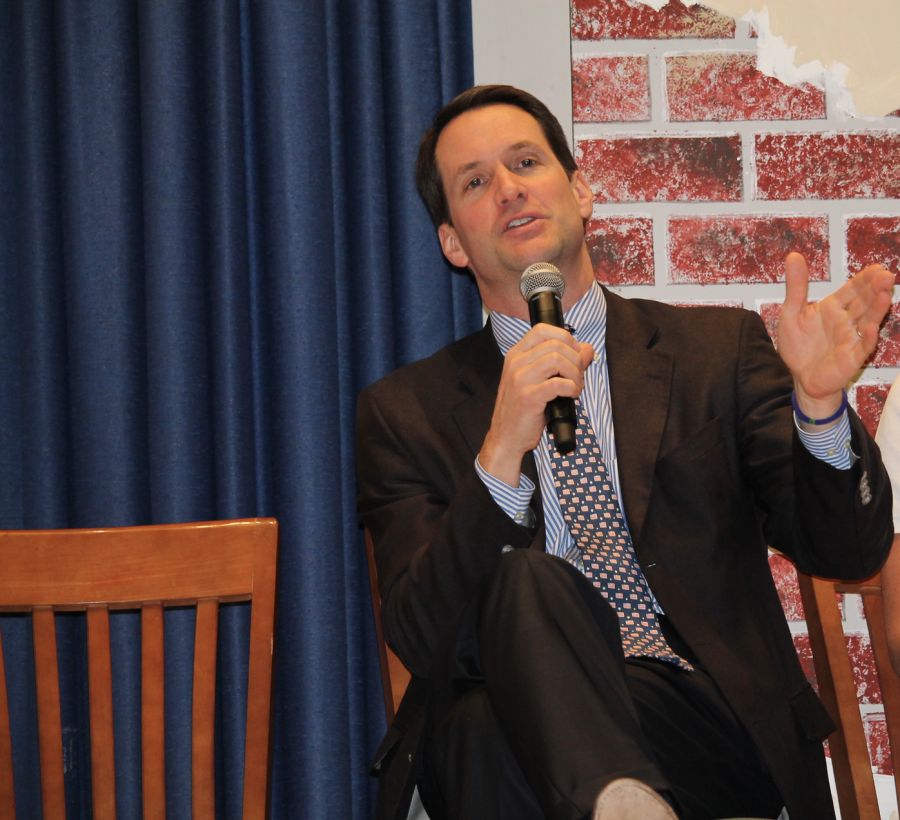 Convent of the Sacred Heart’s Upper School community welcomed Connecticut Congressman Mr. Jim Himes today for the premiere of the student-produced profile centered on the life and work of this political figure. The event included a showing of the film, as well as a question and answer session with Congressman Himes.
Six Broadcast Journalism students, including senior Grace Sutherland, junior Maddie McLane, and sophomores Megan Doherty, Sloane Kratzman, and Charlotte Sheehan, collaborated on this Student Lens project sponsored by Optimum Community.
“Student Lens is a short-form, student-produced video project in which students learn civics lessons while shadowing a public official,” Broadcast Journalism Studio Director and Broadcast Journalism Teacher Ms. Ellyn Stewart said in an email to Upper School students and faculty.


These girls had the opportunity to film Congressman Himes at a “Coffee with your Congressman” Veterans Day event in Norwalk, Connecticut and later interviewed him in the school’s David J. Bloom Broadcast suite.
“This was my first time experiencing the political scene, and I met a lot of interesting people. I especially learned a lot about Congressman Himes and the importance of his job. This was also my first time doing on-camera talent, which was great to be able to try something new,” Megan said.
Today was Congressman Himes’ first time seeing the Student Lens film and he was very pleased with the result.
“I thought it was wonderful and so professionally done. The girls put a lot of time and energy into trying to capture a really important part of our political process and I think they did a great job doing that,” Congressman Himes said.
During the question and answer period, Congressman Himes emphasized the importance of journalism in helping to educate enfranchised individuals.

“In a democracy, you have a responsibility to be informed on the issues so that you can make a choice about the people that represent you. Our system is only as good as your willingness to put in the time and think about issues, and it is of course journalism that is probably the best thing we have out there to help you do that and that is why I am so excited to be part of this program,” Congressman Himes said.
Congressman Himes encourages Sacred Heart students to enter the field of journalism because of the integral role it plays in the political realm.
“I really encourage people who have an interest in Journalism to pursue it. There are very few institutions that are quite as important to our democracy as the press,” Congressman Himes said.
Upper School History Teacher and Chair of History Department Mr. Vincent Badagliacca agrees with Congressman Himes’ view on the importance of journalism in the secular world.
“[Congressman Himes] also reiterated the importance of a robust and independent free press to help educate the citizenry by investigating, uncovering, and reporting the truth about issues of concern to all of us.  Without the truth, as well as education, we operate in ignorance and cannot properly fulfill our duties as citizens of the republic,” Mr. Badagliacca said.

News 12 Connecticut attended the event to interview students and film the presentation for a news piece to be aired on television tonight at 5:00 pm on channel 12.
“My favorite part of the experience was getting to know more about Congressman Himes and learning more about the daily life of a Congressman. As the lead editor, I really got to portray the message in the best possible way,” Maddie said.
– Jade Cohen, Opinions Editor and Nadia Zuaiter, Staff Writer