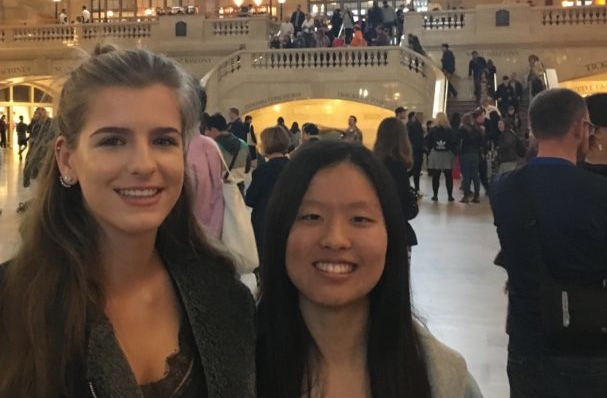 After arriving at John F. Kennedy International Airport from Vienna, Austria, Yoon Su Oh, a student from Sacré Coeur Wien, became the newest addition to Convent of the Sacred Heart’s sophomore class. Trading the wide streets of Vienna for the halls of Sacred Heart, Su will live with sophomore Isabella Meyerhoff from September 19 to October 26.

In contrast to Sacred Heart, Sacré Coeur Wien is a co-educational school, where each grade typically includes 75 students. Another difference Su mentioned between Sacred Heart in Greenwich and its counterpart in Vienna was that, in Vienna, the teachers come to each classroom rather than the students moving from class to class.
A similarity between Greenwich and Vienna is Gemeinschaftstag, a tradition that resembles to Congé.
“Gemeinschaftstag is a School Community Day, and basically the whole idea is about socializing,” Su said. “There are two ways of this day. [Way] one, two different classes get together and do something and [way] two, a single class does something as one class. Either way you miss classes in the morning and do an activity together.”

In order to expose Su to the New York lifestyle, Isabella took Su on a three day trip into The Big Apple to introduce Su to the sites Isabella finds most interesting. Su enjoyed visiting The Statue of Liberty, The Metropolitan Museum of Art, and stopping for lunch near Central Park. Su is now a fan of New York’s famous brick-oven pizza.
As part of the exchange program, Isabella will travel to Vienna in June to attend Sacré Coeur Wien. Isabella decided to apply for exchange in Vienna because of its bustling city life, and the newfound opportunity to practice her German, which she learned at a very young age from her dad.
“I am excited to walk around the city, see what her [Su’s] lifestyle is like, and experience another Sacred Heart school,” Isabella said.
During Su’s time in the United States thus far, she has taught Isabella about traditions in Vienna, such as Oktoberfest. Oktoberfest is a festival in Vienna where people gather to enjoy foods, drinks, and celebrate fall together with their family.
Along with Su, Sacred Heart Greenwich will be welcoming other exchange students within the next few weeks from Dublin, Ireland and Barcelona, Spain.
– Juliana Collins, Staff Writer