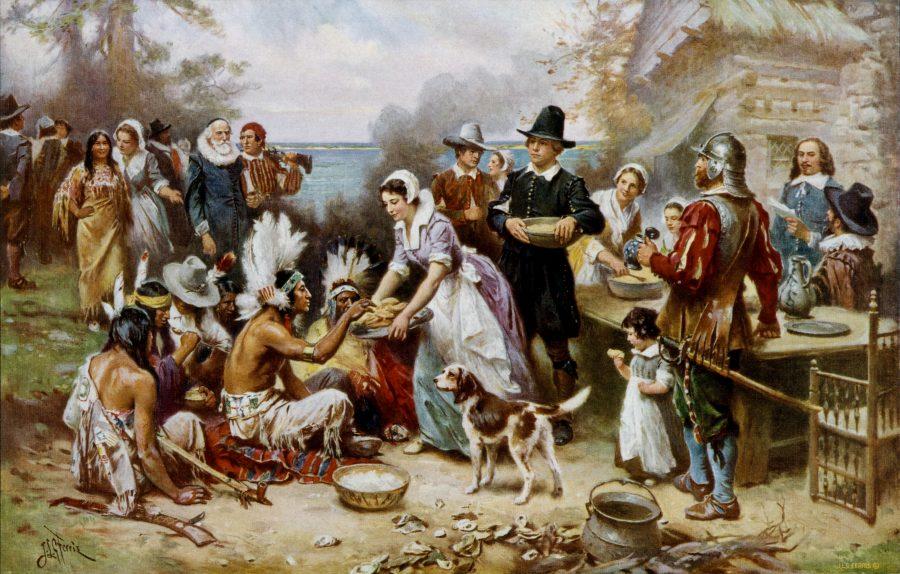 Eighteenth-century French artist Mr. Jean Leon Gerome Ferris painted the “First Thanksgiving 1621” as one of 78 works in his series titled “The Pageant of a Nation.” This artwork depicts an amicable feast between the English colonists and Native Americans. While the scenario is idealistic, it does not adequately portray the true events that took place during the autumn of 1612, according to historicaldigression.com.
Mr. Ferris was born in Philadelphia August 18, 1863. His mother, the sister of three popular artists at the time, and his father, an artist himself, supported Mr. Ferris’ love for art. After childhood, Mr. Ferris enrolled in art schools around the globe such as the Pennsylvania Academy of the Fine Arts (PAFA) in Philadelphia and the Académie Julian located in Paris, according to antiqueshoppefl.com.
Throughout his life, Mr. Ferris worked on the collection “The Pageant of a Nation,” according to historicaldigression.com. The 78 piece collection depicts important moments within American history. He refused to sell a piece of artwork until he considered it finished.
His collection included the painting “The First Thanksgiving 1621.” He worked on the painting during the Modern Art Era, the first time European ideas, models, and movements dominantly influenced American art, according to visual-arts-cork.com.
According to loc.gov, the painting was originally composed of oil-based paints. However, 20 years later, The Foundation Press in Cleveland, Ohio printed photochemical copies for their daily paper.


“The First Thanksgiving 1621” idealizes the historical event that is now associated with the holiday of Thanksgiving. Depicting a harmonious relationship between the English colonists and Native Americans, the painting focuses on the image of a pilgrim woman sharing food with a native man. Furthermore, an English woman invites a Native American to join the feast, symbolizing a peace offering between the two groups.
“The primary focus [of the painting] is sharing bounty as a nation and giving thanks for the extraordinary blessing that the land has given them,” Upper School Theology and Advanced Placement (AP) Art History teacher Mr. Dan Favata said.
In addition, Mr. Ferris uses bright and vibrant colors, which gives the painting a cheerful appearance. The artist uses color to convey a feeling of communion amongst the English settlers and the Native Americans.
While this is a peaceful and idealistic version of the story of two cultures bonding together, it is not necessarily historically correct. Mr. Ferris’ focus was not on the tragedy of the circumstances that allowed the English to colonize and prosper, but it instead highlights a more democratic and peaceful scene of communion, which is inaccurate.
“It is more so used as a way to shape public opinion, and is less concerned with accurate representation of a historical moment,” Mr. Favata said, referring to Mr. Ferris’ painting.
According to historyofmassachusetts.org, the first Thanksgiving spanned three days between September and November 1621. It was a feast that involved about 90 Indians of the Wampanoag tribe and roughly 50 pilgrims, according to plimoth.org. Instead of eating turkey on Thanksgiving, the first celebrators of the holiday ate foods such as mussels, lobster, plums, cranberries, corn, and herbs.
According to huffingtonpost.com, when the English arrived at Plymouth Rock, Massachusetts, they also introduced diseases such as smallpox to the Native Americans, who were never exposed to the virus beforehand. As a result, almost 75 percent of the Wampanoag tribe died of influenza. The settlers then determined that it was God’s destiny for them to claim the desolate land.
With the upcoming celebration, Mr. Favata sees the opportunity to give thanks for the Sacred Heart community.
“Every day is Thanksgiving at Sacred Heart. We give thanks and cherish being with each other each day, and for the wonderful gifts God has given us,” Mr. Favata said.
– Elisabeth Hall, News and Photo Editor and Nina Rosenblum, Staff Writer
Delete Image
Align Left
Align Center
Align Right
Align Left
Align Center
Delete Heading