Characters come to life in Fiddler on the Roof 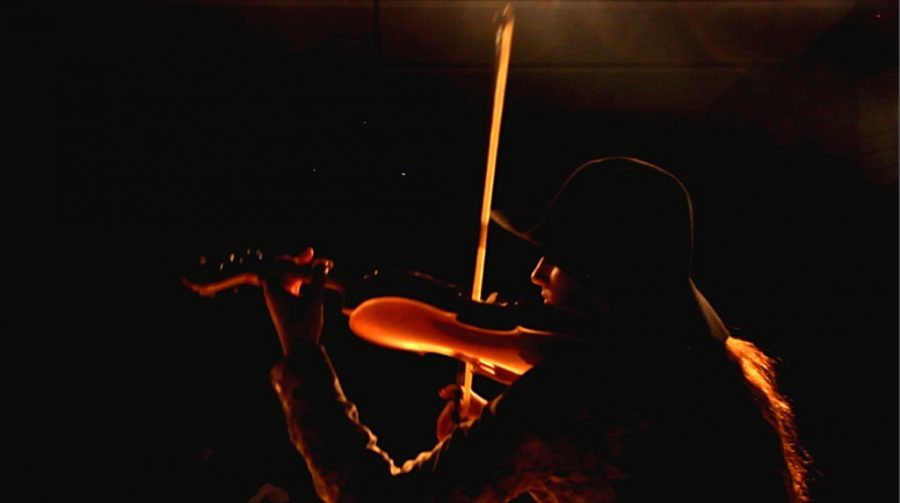 Lorraine Rinaldi '19 as the Fiddler Courtesy of Elizabeth Bachmann '17

This weekend, Sacred Heart Greenwich students brought their characters “To Life” during the Upper School spring musical production of Fiddler on the Roof. The cast performed the musical March 3 at 7 p.m. and yesterday March 5 at 3 p.m. in the Lennie de Csepel Theater.

Fiddler on the Roof is a musical set in the Pale of Settlement in Imperial Russia in 1905. The show follows a Jewish dairyman named Tevye, his wife and five daughters, and their life in the village of Anatevka, Ukraine, according to mtishows.com. Playwright Mr. Joseph Stein adapted the characters in his musical from Mr. Sholem Aleichem’s series of stories titled Tevye the Dairyman.

“The play is a lot about him trying to figure out how to continue his traditions in a world that is getting more modern,” Elizabeth said. “He is very much the father, and he is very protective. I really enjoy playing him.”

Middle and Upper School Drama Teacher and Director of Upper School Theater Productions Miss Michaela Gorman ’05 decided on Fiddler on the Roof because she saw a connection between the characters in the play and the students.

This is the third Upper School musical production Miss Gorman has directed at Sacred Heart. Last year, she directed Les Misérables. Although last year’s production was complex as well, Miss Gorman believes that this year’s dance-heavy script was a challenge.

“I think that something that has been a challenge but also kind of exciting is that this a show with a lot of dance in it,” Miss Gorman said. “One of the dances even involves the actors having to balance bottles on their heads.”

With the help of choreographer and Middle School Spanish Teacher Miss Christine Parente, the cast was able to learn and perfect the intricate dances.

Bell Choir Director Ms. Danielle Gennaro collaborated with Miss Gorman on many aspects of the production, including costume design.

After rehearsing for weeks and often until 10 p.m. the week before the show, Miss Gorman reflected proudly on the accomplishments of the student-actors.

“I am really proud of how hard the student actors have worked in preparing this show and how dedicated they have been,” Miss Gorman said. “They have demonstrated a lot of commitment, and I feel like this really shows in this particular show.”

“It was a really entertaining play to watch,” junior Kaitlin Reilly said. “All the dancing and choreography was well done, and the students were very enthusiastic and charismatic.”

As gender roles play a major part in the play itself, Miss Gorman believes the all-female cast brings a new and interesting angle to the musical.

“I think there are a lot of traditions in the show, so we tried to pay homage to the productions that have come before this,” Miss Gorman said. “But I think that it is very rare for a production to be all-female, and so I think that is something unique about ours.”

As a whole, the cast members believe that performing in the musical allows them to bond and become closer with people in different grades.

“My favorite part of the musical is being part of the family we have,” sophomore Meredith Wilson said. “There is a great sense of community and we all love what we are doing and being together.”