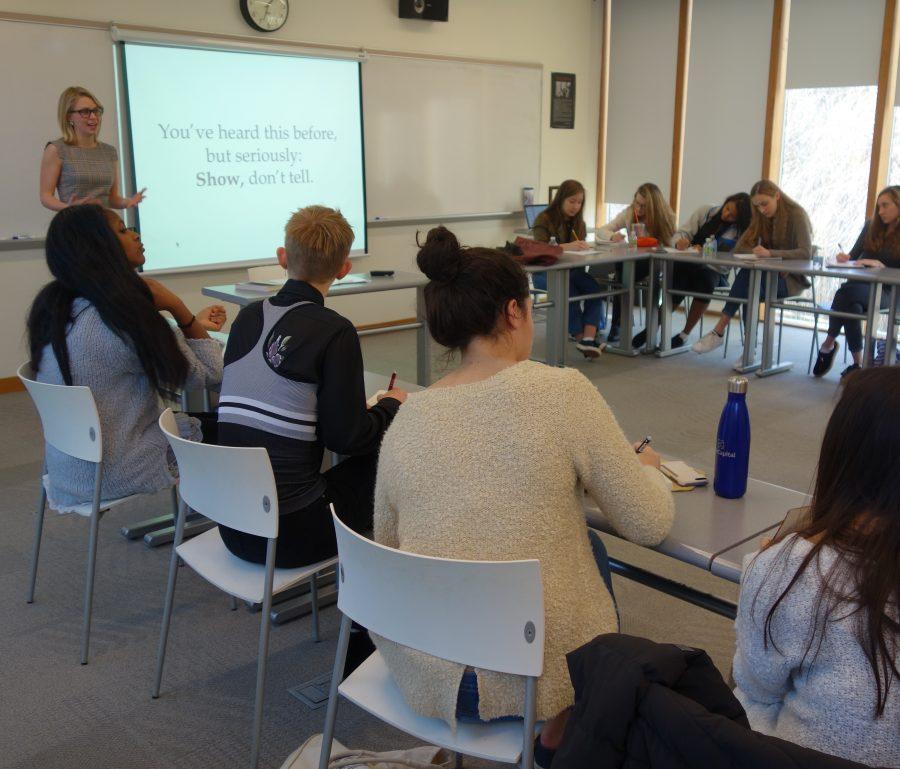 Writers across the region gathered at the eighth annual Greenwich Writers Festival February 4 from 11 a.m. to 4 p.m. to celebrate the power of the written word. Students and faculty of Sacred Heart Greenwich, Greenwich Academy, and the Brunswick School engaged with filmmakers, journalists, and novelists whilst listening to, ruminating upon, and veridically creating fine works of writing.


Each year in preparation for the event, students and faculty from all three schools invite accomplished writers to speak and teach at the festival. Festival moderators and Upper School English teachers Dr. Cristina Baptista and Dr. William Mottolese prize student involvement. They also encourage members of each school’s literary magazines, such as Sacred Heart’s Perspectives, to organize and promote the event among classmates.
Student organizers invited playwright, screenwriter and film director Mr. Charles Evered, writer, teacher, videographer and editor Ms. Katie Rainey, and journalist, author, and Sacred Heart alumna Ms. Caroline Kitchener ’10 to attend.
“Although there might be a rivalry on the sports field, this festival is a chance for all three schools to collaborate as students, thinkers, writers and artists. To have students at the helm of this means that they are establishing the seeds of their professionalism,” Dr. Baptista said, “Part of this is being communicative and talking with peers and writers of different ages, areas, and backgrounds.”
Upon arriving at the festival in the Student Center at Greenwich Academy, students enjoyed lunch with guest writers. Soon after, students and faculty convened and listened to each of the three guest writers speak about their writings and experiences.
Screenwriter Mr. Chuck Evered launched the series of readings and discussions. The voracious playwright spoke about the importance of finding one’s own authentic voice in writing. Instead of reading an excerpt of his work, Mr. Evered described his educational and occupational background, including his time as a professor of playwriting at The University of California Riverside.
In his discussion, Mr. Evered quoted poet Mr. Rainer Maria Rilke in saying, “‘Have patience with everything that remains unsolved in your heart. Try to love the questions themselves like locked rooms or books written in a foreign language, do not now look for the answers.'”
Next, Sacred Heart alumna Ms. Caroline Kitchener ’10 read an excerpt of her book Post Grad, which Penguin Books will release April 11, and shared her experiences venturing into journalism after graduating from Sacred Heart. A graduate of Princeton University, Ms. Kitchener was ultimately drawn to pursue and explore truth through journalism.
In her lecture, she elaborated on the experiences in college that compelled her to continue nonfiction writing, fearlessly tackling some of the most challenging social and gender issues facing society today. Ms. Kitchener described her experiences interning at The Atlantic Magazine and writing her first book Post Grad for Penguin Books.
Post Grad highlights the struggles women face the first year after they graduate from Ivy League schools. Ms. Kitchener believes that the best kind of writing is authentic, truthful, and tailored to appeal to a specific audience, while maintaining the integrity of the argument or story. Ms. Kitchener insisted that young writers take interest in pressing issues, which can be uncomfortable to discuss.
“My message to you all is that [writing] is very possible and my hope is that you all go to college and try to make it possible for yourselves,” Ms. Kitchener said.

Next, fiction writer, teacher, and videographer Ms. Mary K. Rainey spoke. The audience of young writers listened intently to an excerpt from her unpublished novel.
In her speech, Ms. Rainey briefly described her background as a passionate young writer who began her literary journey at six years old. A teacher at heart, Ms. Rainey also dove into an explanation of different literary elements, emphasizing the importance of creating a unique story that conveys an importance message to readers rather than one that is solely entertaining.
“Story telling and fiction writing should always be doing something, giving you ideas, and teaching you something,” Ms. Rainey said. “The more you read, the more knowledge you obtain and the more empathetic you become.”
Students received advice and stories from guest writers. Equipped with new ideas and motivation, the students split into three classes of workshops. One guest writer lead each of the three classes, which consisted of approximately ten to fifteen students each and lasted for one hour.
In Ms. Rainey’s workshop, students practiced inverting traditional applications of language, voice, and structure. Students listened to Ms. Rainey explain new ways of approaching fiction writing, wrote their own short stories, and then listened to each other’s work. Alternatively, in Ms. Kitchener’s workshop, students read examples of profile articles published in The New Yorker. Students then wrote their own ledes of profiles about people in their lives. Ms. Kitchener invited students to take their ledes home and continue working on them, ideally continuing to explore unfamiliar genres of writing. In Mr. Evered’s workshop, students examined excerpts of different plays and discussed elements of writing with an authentic voice.
“I enjoyed exploring different genres of writing, especially fiction writing with Katie Rainey. It was interesting to try writing exercises which challenged me take on new variations of voice, structure, and rhetorical strategy. Everyone seemed so engaged and interested, especially in writing ‘the worst story ever,’” junior Tiara McIntosh said.
At the eighth annual Greenwich Writers Festival, students developed a deeper understanding of filmmaking, novel writing, and reporting authentically in journalism. Scribbling fervently in spiral notebooks and tuning into greater issues surrounding them, students focused on writing authentically. The well-acquainted writers, both youthful and experienced, concluded their eventful afternoon of writing with a promise to be confident in their writing and in their original translations of the world around them.
-Christina Weiler, Arts and Entertainment Editor
Delete Image
Align Left
Align Center
Align Right
Align Left
Align Center
Delete Heading