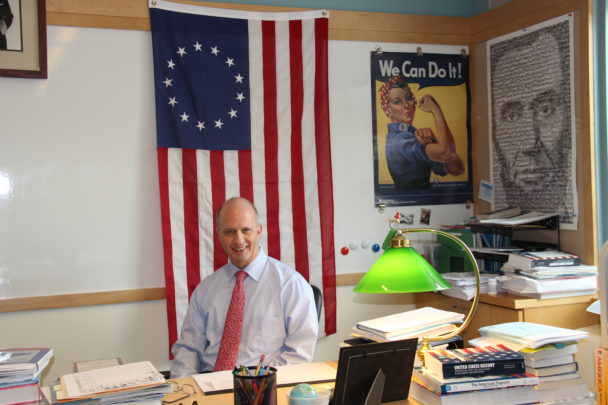 Why is Presidents’ Day an important holiday?
“The holiday has become a day to celebrate all presidents, the forty-five individuals who have served the nation, all with their own unique set of challenges, successes, and failures.  All have tried to fulfill the role and to serve the public interest as chief executive in our republican democracy.”
What does Presidents’ Day mean to you?
“I still think of the former February tradition; that is, celebrating the birthdays of George Washington, “the father of our country,” and Abraham Lincoln, the savior of the union and the great emancipator.  Both were such unique men whose personal qualities were so important to the nation.  Washington defined the role of the new chief executive and guided the nation through revolution and the early years of the republic.  He gave up power, not once, but twice – as general of the revolutionary army and after two terms as president, thus establishing an important tradition.  When told about the latter, Washington’s great adversary, King George III, said “If he does that, he will be the greatest man in the world.”
As for President Lincoln, not only did he save the nation by refusing to accept secession, but as the great emancipator, and unlike the founders, he gave true meaning to Jefferson’s beautiful vision expressed in the Declaration of Independence “that all men are created equal. . .”  He gave his life to make that vision a reality and charted the course for an expanded definition of freedom and equality.  In so many ways, among them, his achievement, his growth, his evolution, his strength, his courage, to name but a few, Lincoln was indeed unique.”
Which President or Presidents do you think exemplifies the meaning of Presidents’ Day, and why?
“Beyond Lincoln and Washington, in my lifetime, President Reagan was a great inspiration to me as an American.  He was a man who unabashedly believed in “American Exceptionalism,” the shining “city on a hill” where, despite challenges and mistakes, freedom, opportunity, and achievement have flourished like no other place.  We need presidents who are optimistic, who inspire, who promote individual freedom, initiative, growth, opportunity, and who recognize that despite our flaws, America and Americans have been a force for good in the world.”
The King Street Chronicle thanks Upper School History Teacher and Chair of History Department Mr. Vincent Badagliacca for his contributions to “Humans of Sacred Heart.”