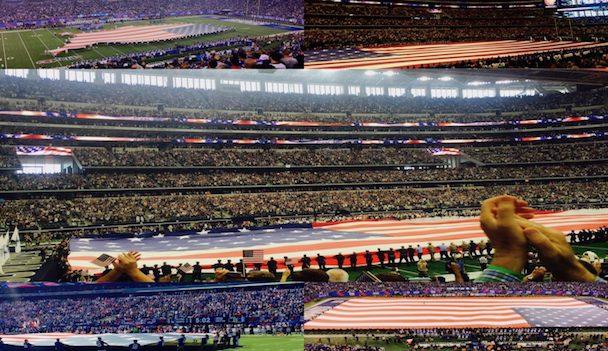 National Football League (NFL) players continue to follow in the footsteps of former San Francisco 49ers quarterback Colin Kaepernick, who protested in 2016 by kneeling during the national anthem. Mr. Kaepernick was silently protesting against police brutality and racial injustice, according to nfl.com.

“I am not going to stand up to show pride in a flag for a country that oppresses black people and people of color,” Mr. Kaepernick said, according to nfl.com.

The NFL did not initially penalize Mr. Kaepernick for his protest citing his right as an American citizen to express his freedom of speech. However, later in the season, Mr. Kaepernick, who played for the 49ers since 2011, lost his job despite his reputation as one of the most promising NFL players, according to nfl.com.

“Colin Kaepernick’s goal has always been, and remains, to simply be treated fairly by the league he performed at the highest level for and to return to the football playing field,” Mr. Geragos said, according to espn.com.

During the current 2017 NFL season, other NFL players are adopting Mr. Kaepernick’s model of protesting during the national anthem. This time, the protests caught the attention of United States President Mr. Donald J. Trump, who publicly criticized players who kneeled against the national anthem.

“If a player wants the privilege of making millions of dollars in the NFL, or other leagues, he or she should not be allowed to disrespect … our Great American Flag [or Country] and should stand for the National Anthem. If not, YOU’RE FIRED. Find something else to do!” Mr. Trump tweeted.

After the tweet went viral, more than 200 players took action to oppose Mr. Trump’s statement. The 2017 protests, which social media users are calling #TakeAKnee, are now transforming into a widespread movement with multiple teams participating.

Some teams have different approaches to protesting. Instead of taking a knee, Philadelphia Eagles teammates and coaches locked arms on the field during the anthem on September 25.

However, protests have led to disunity within several of the NFL teams. For example, the Pittsburgh Steelers stayed in the locker room during the national anthem except for their left tackle, Mr. Alejandro Villanueva. He was the only player from his team to stand and shortly after commented that he felt guilty for being the only one out of his teammates standing for the national anthem, according to cbssports.com.

Later on, Pittsburgh Steelers quarterback Mr. Ben Roethlisberger issued a statement supporting Mr. Villanueva’s decision and expressing his regret about the protest. Alternatively, Dallas Cowboys owner Mr. Jerry Jones handled the protest controversy differently. The Cowboys kneeled during the national anthem against the Arizona Cardinals on September 25. After Mr. Jones spoke up against this kneeling during the anthem, however, the team returned to standing in their next game against the Los Angeles Rams.

“If you do not honor and stand for the flag in the way that a lot of our fans feel [players should]…then you won’t play,” Mr. Jones said, according to reuters.com.

By week five in the regular football season, the protests continued and teams disagreed over standing for the national anthem. The Indianapolis Colts protested, standing side by side and linking their arms while wearing black t-shirts with writing stating that they will stand for equality, justice, unity, respect, dialogue, and opportunity, according to rollingstone.com.

Commissioner of the NFL Mr. Roger Goodell is addressing this controversial situation by writing a letter to NFL executives.

“I’m very proud of our players and owners who have done the hard work over the past year to listen, understand and attempt to address the underlying issues within their communities,” Mr. Goodell wrote, according to cbssports.com.

Disunity persists throughout the NFL as teams debate whether they will stand, kneel, or even link arms during the national anthem. Yesterday, NFL team owners addressed the issue at the Conrad Hotel in Manhattan in an effort to mitigate the disagreement teams have regarding protesting the Anthem.

During the meeting between 11 team owners and representatives, protesters outside carried signs stating “Take A Knee Against Racism” and “White Silence = White Violence,” according to nbcnews.com. The NFL and NFL Players’ Association released a joint statement shortly after the meeting.

“Everyone who is part of our NFL community has a tremendous respect for our country, our flag, our anthem and our military. In the best American tradition, we are coming together to find common ground and commit to the hard work required for positive change,” the statement said, according to NBC News.