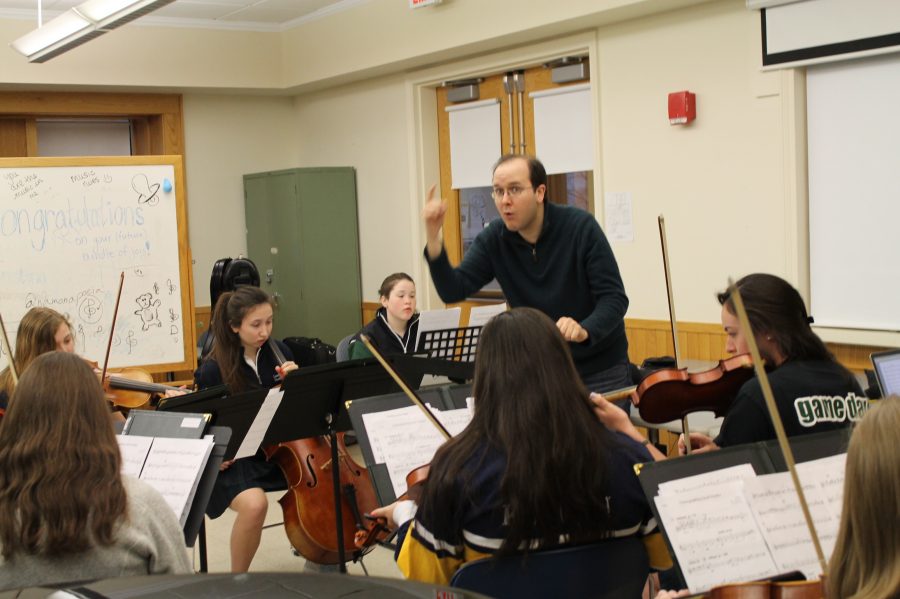 Mr. Bush and the orchestra piece have been working since January on learning Choreographing Small Heathers. Taylor Michael '13

The Convent of the Sacred Heart Orchestra debuted Choreographing Small Heathers at the Upper School Spring Concert on Wednesday, April 17. The piece was commissioned by Sacred Heart orchestra conductor Christopher Bush from Ian Ng, one of Mr. Bush’s students at New York University.
This piece was tailor-made for the orchestra. Mr. Bush wanted a piece that both would challenge the orchestra and still be manageable.


“[Mr. Bush] gave me some restriction and told me what’s going on with the group,” Mr. Ng said. “I had an idea of what the orchestra was like. I knew I had to give some challenge but something that’d be comfortable.”
For Mr. Ng, the process of writing the piece began last spring. Mr. Bush wanted to introduce his Sacred Heart students to live composers. At NYU, Mr. Bush teaches a course called “Composer’s Ensemble” and thought Ian Ng’s style would be good for the orchestra.
The composition process took four weeks. During the brainstorming , Mr. Ng had sketches of different themes. Mr. Ng played with different melodies and harmonies he wanted to incorporate into the piece.
“I had, in the initial stages, themes and some harmonic colors and played around with these ideas on the piano,” Mr. Ng said.

Mr. Ng decided to develop one central theme in his piece. After the piece was drafted, he spent another one to two weeks finishing the entire piece.  Then the piece was sent to Mr. Bush for editing.
“I tried to stay away from changing the piece, and looked more on the technical aspect,” Mr. Bush said.
Mr. Bush worked with Ian Ng to make the piece manageable for Sacred Heart’s small student orchestra with only eight violinists, three pianists, four flutists, two violists, a clarinetist, and a cellist.

“Today is my first time to see the girls,” Mr. Ng said on April 14. “I’m nervous and excited, because I don’t know them and it’s my very first time the music is being realized.”