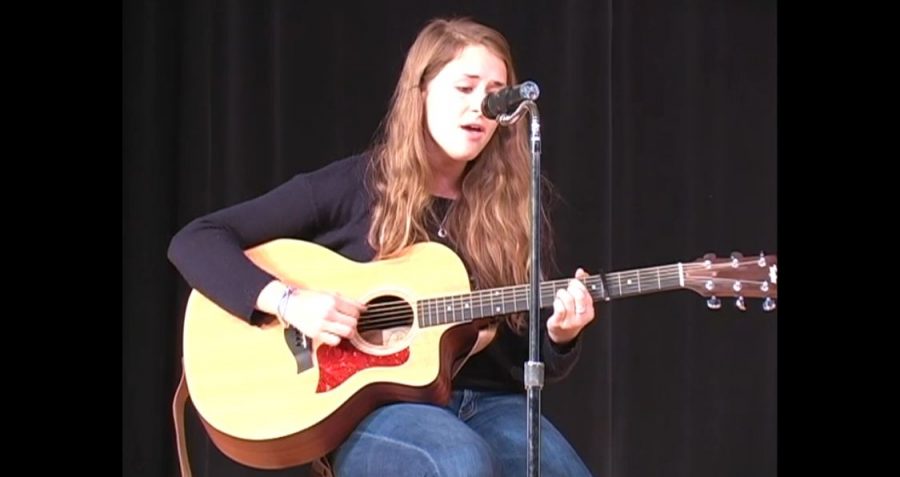 The burn of the spotlight. The hushed crowd. The lone figure up on stage. School talent shows are a chance for students to risk it all and show their classmates what they can do beyond the classroom. On April 4, Convent of the Sacred Heart students danced, sang, and joked for Talent for Tots, the talent show charity event that has become a staple in the Sacred Heart event calendar.


“This is one of the community service flagship events – it’s something that we look forward to and that we count on every year to be able to continue with our commitments to Sacred Heart Uganda and Summer Academy,” Director of Campus Ministry and US Community Service Mrs. Lori Wilson said.
Although admission to the performance was free the Community Service club was still able to profit from the event. Raffle tickets were sold for one dollar each prior to the event and pizza and baked goods were sold before the acts and during intermission.
According to Mrs. Wilson, the  profits from this year’s show will cover the cost of sending one student to Sacred Heart Uganda and three to the Summer Academy, a summer academic program for children from low-income families in the community. Based on the number of students who attended, the quality of acts and overall entertainment, the event was a huge success.
“It was the best run we’ve ever had because the girls who ran it did a brilliant job and all the people who performed were entertaining,” Mrs. Wilson said.
According to Mrs. Wilson, this year’s event also included the biggest group of students in the audience she had seen.

“Rescheduling until later got us more acts and allowed for more people to come,” Mrs. Wilson said.
Senior Erin Manning, co-head of the community service club said she had high expectations for the show as well.

“I expected the acts to be strong but they were way better than I expected them to be,” she said.
With high expectations for the performances, Talent for Tots provides an opportunity for students to showcase their talents in ways not otherwise seen during the school day.
“We do have a lot of freshman who are singers and songwriters. [Talent for Tots] gives them a forum to test it out and see the reaction of the community,” Mrs. Wilson said. “Usually that response is so affirming and keeps them confident going forward— it might be what people need to say I want to be a singer or songwriter.”
Freshman Tori Carley sang Jason Mraz’s “I Won’t Give Up” and freshman Eva Carrasquero sang Leonard Cohen’s “Hallelujah.”

The event also included a comedy skit by seniors Devon Hoffman and Maddie Pillari, and two dance performances by NovaJazz, a high-performance dance team from Bedford Hills, New York, featuring senior Jennie Chieco.
“Everyone was really talented and Jennie’s dance group was really great. I thought Devon and Maddie’s skit was so funny, I watched it again,” senior Emma Burke said. “Talent for Tots was long, but everything was really good in it. I really enjoyed it”
Senior Jen Rohde’s proposal to her boyfriend for the Sacred Heart prom concluded the event.
“There were a lot of surprises so I think that made it very spontaneous,” junior Yamilex Bruno said. “I was entertained the whole time.”