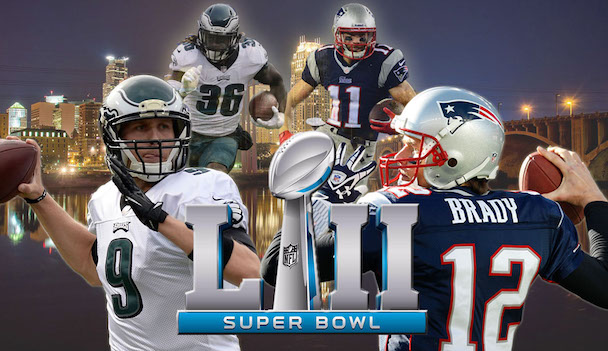 Last night the Philadelphia Eagles made history after winning their first Super Bowl championship against the New England Patriots 41 to 33. The game took place at the US Bank Stadium in Minneapolis, Minnesota. The Eagles were a favorite to win in the Sacred Heart Greenwich community, leading in the Super Bowl-themed food drive.

The journey to the Super Bowl began when the Patriots beat the Jacksonville Jaguars Sunday, January 21, with a close score of 24 to 20, winning their tenth American Football Conference Championship. The Eagles claimed their tenth National Football Conference (NFC) Championship after they beat the Minnesota Vikings 38 to seven Sunday, January 21. Both the Patriots and the Eagles ended their seasons with 13 wins and three losses.

The Patriots’ quarterback, Mr. Tom Brady, played his eighth Super Bowl last night. Meanwhile, the Eagle’s starting quarterback Mr. Carson Wentz tore his anterior cruciate ligament Sunday, December 10, 2017, during the regular season in a game against the Los Angeles Rams. As a result, he was unable to compete during the remainder of the season. Instead, the Eagle’s second-string quarterback, Mr. Nick Foles, led the team in their NFC Championship victory and at Super Bowl 52.

The city of Minneapolis started planning for Super Bowl 52 more than a year before the game took place. The city expected one million people to attend the game, so various wifi providers enhanced wireless connectivity in the stadium, according to startribune.com. As an extra precaution, Minneapolis placed more security around and inside the stadium. Additionally, with all the football fans that came into the city, hotels and shops raised their prices which allowed for a substantial profit, according to startribune.com.

In anticipation for the game, Sacred Heart Greenwich’s Food Ambassadors Club organized a Super Bowl-themed food drive that encouraged students to donate food items such as rice, canned tuna, beans, and peanut butter. Volunteers and club members decorated two boxes, one representing the Eagles and the other representing the Patriots. Students placed their food items into whichever team’s box they predicted would win the Super Bowl. The food donations will go to Caritas of Port Chester Inc, a local soup kitchen and food pantry in Port Chester, New York.

Seniors and club co-heads Zaza Gil and Olivia Monahan were in charge of the food drive and are both very passionate about fighting world hunger. They wanted to have the drive during the winter months after the holiday giving season because there is a decline in donations during this time.

“At Food Ambassadors, we raise awareness about the poor distribution of food to those who need it most,” Zaza said. “The Sacred Heart community is very spirited, so we thought it would be the perfect way to get in on the action and help others.”

The patriotic spirit continued when military veteran Mr. Hershel Woodrow Williams performed the coin toss. Fourteen other Medal of Honor recipients surrounded Mr. Wiliams and watched the coin toss.The Patriots won the toss and had the chance to start with the ball. However, they declined and gave the opportunity to the Eagles.

The Eagles finished the first quarter leading the game nine to three. They were also the first to score as a result of a field goal by kicker Mr. Jake Elliott. Also, Mr. Stephen Gostkowski put the Patriots on the scoreboard with a field goal. Nearing the end of the first quarter, both teams were tied three to three. Eager to get ahead, Mr. Alshon Jeffery scored the first touchdown of the game giving the Eagles their nine to three lead. In the second quarter, the Eagles scored two more touchdowns, and the Patriots scored both a field goal and touchdown, ending the first half with a score of 22 to 12 in favor of the Eagles.

Singer Mr. Justin Timberlake opened the Pepsi Super Bowl 52 Halftime Show with his new song “Filthy.” He followed with some of his classics including “Rock Your Body,” “Suit & Tie,” and “Mirrors.” Mr. Timberlake also honored singer Mr. Prince Nelson, more commonly known as Prince and a Minneapolis native, by singing Prince’s song, “I Would Die 4 U.”  Purple lights lit up the stadium, and a hologram of Prince was in the middle of the field. Mr. Timberlake closed the halftime show with his most recent hit, “Can’t Stop The Feeling.”

At the end of the third quarter, the Patriots scored two touchdowns and the Eagles scored one. The Eagles were still leading 29-26 in a close game. During the fourth quarter, the Patriots took the lead with a score of 33-32, but it was short-lived, as the Eagles made another touchdown, and Mr. Brandon Graham caused the Patriots to fumble, allowing Mr. Zach Ertz to score the winning touchdown. This was followed by a field goal by Mr. Elliott to win the Super Bowl 41 to 33.
Mr. Foles threw 373 yards with three touchdown passes, and one receiving touchdown. The National Football League named him the Most Valuable Player of the game, and he received the honor with his daughter by his side. In the course of one season, Mr. Foles went from being a second-string quarterback to a Super Bowl champion.

“I felt calm,” Mr. Foles said at the Super Bowl, according to espn.com. “I mean, we have such a great group of guys, such a great coaching staff. We felt confident coming in, and we just went out there and played football.”