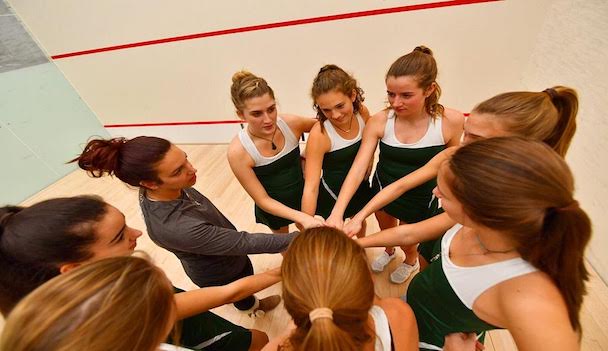 This season, Sacred Heart Greenwich’s winter athletic teams competed against other high schools in the area, hoping to receive new winning titles. During the months of January and February, basketball, diving, and swimming competed in the Fairchester Athletic Association (FAA) Tournaments and New England Preparatory School Athletic Council (NEPSAC) Tournaments, while squash played in the US High School National Squash Championships and the New England Tournament.

The varsity squash team, whose coaches are Mrs. Celia Pashley and Mr. Peter Kearney, was the first to participate in a championship game. The team competed in the US High School National Championships Friday, February 2 and Saturday, February 3 for the first time since 2009, placing 14th overall. In the New England Tournament Saturday, February 24, Sacred Heart’s varsity squash ended sixth overall at Exeter Academy. The team finished the season with 13 wins to four losses.

“Our team grew enormously both physically and emotionally,” senior and squash co-captain Tory Huchro said. “At nationals, it was amazing to see some of the younger, quieter teammates come out of their shell and push themselves to reach new levels in their game.”

Later in February, Sacred Heart’s varsity basketball team played to advance to the FAA Championships. The team competed against Greens Farms Academy at the FAA Quarterfinals game Tuesday, February 20, continuing to the Semifinals after a win of 57 to 49. In the FAA Semifinals Thursday, February 22, the team lost against Hamden Hall with a score of 46 to 49. Under the leadership of new varsity basketball coach Mrs. Ayo Hart and senior co-captains Erin Cleary and Laura Holland, the team wrapped up their regular season with seven wins and eight losses.

“I feel that our team showed how much we care about one another, and how much we wanted to win every game so that we would continue playing with each other,” Erin said. “Even though we may have fallen short in the semi-final game against Hamden Hall, our team never gave up. The determination and effort everyone showed perfectly exemplified our school’s spirit.”

This year’s varsity diving coaches Mr. Joe Somma and Mr. Mike Darland worked side by side with the divers, helping the team end the season with three wins and two losses. The diving team participated in the Bud Erich Diving Invitational Friday, February 23, where they moved on to compete in the NEPSAC Division I Diving Championships. This event took place Wednesday, February 28 at Deerfield Academy, where eighth-grader Annie Bingle placed second overall.

“My team and I learned so much this season. When we finished the FAA Championship meet, we were overly excited and proud to be announced as the number one team ranked,” junior and diving co-captain Olivia Wise said. “We worked so hard, and I think that the bond our team [made] has definitely helped us to not stress going into all the meets leading up to the championships.”

Swim coaches Mr. Brendan Heller and Miss Keegan Reed trained the junior varsity and varsity swimming teams that placed third in the Bud Erich Invitational Saturday, February 24. Throughout the regular season, the team had a record of eight wins to seven losses. As one of the top three in the FAA Championships, the team advanced to the NEPSAC Swimming Championships Saturday, March 3 and Sunday, March 4. There, the team participated in the Division I Championships and placed 11th with a total of 86 points.

“Going into the FAAs this year, we didn’t feel as confident as we did last year. My goal walking in was just for all of us to work hard and finish out the season on a high note,” senior and co-captain Kalyna Carroll said. “But we ended up having three finalist swimmers, one more than last year, showing that we exceeded our own expectations. It was a great way to end my fours years here.”