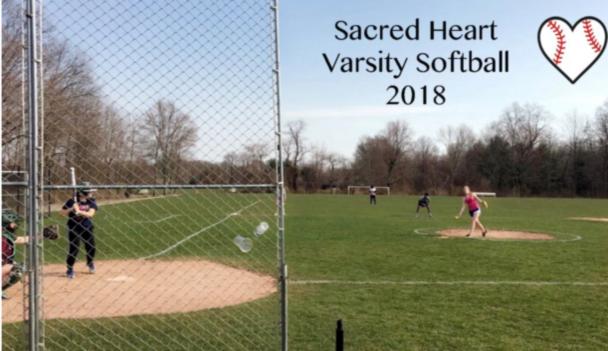 Sacred Heart Greenwich varsity softball has been hitting it out of the park this spring, obtaining a record of six home runs. Freshman Lily Hay, juniors C’meijah Donaldson and Lindsey Morgner, and seniors Ayna Ramseur-Moore, Bridget Ann Murphy, and Emily Coster all have hit home runs.

This year, Ms. Lindsay Thompson has taken over as head coach of the Sacred Heart varsity softball team, and Ms. Alexandra Holowach and Mr. Marc Medico are co-assistant coaches. Under their guidance, the varsity softball team ended their season with a record of five wins, three losses, and one tie. In a notable victory against Greenwich Academy Monday, April 30, Sacred Heart ended the game with an 11 to 5 advantage. Senior co-captain Abby Leyson saw this game as the team’s biggest accomplishment of the season.

“We were losing by a lot and it seemed like we would never get out of the ditch we were in, but at the bottom of the fifth inning, we came back and scored enough to tie and then win,” Abby said. “We never gave up, which represents how our team has always worked.”

The team’s cohesive bond is one which motivates members to grow both as teammates and to perfect their individual skills. Last year, Coach Heller credited the motivating seniors for the unique bond on the team. This team spirit continues as sixteen players have joined the softball team, making it the largest team in four years. Co-captain Ayna credits the large roster as a significant accomplishment for creating a stronger foundation for the team.

“When I started playing as a freshman, there weren’t many players and we had to bring up eighth graders, but now there are more players who are becoming committed to the team,” Ayna said.

This commitment helps the softball team grow every season. Beyond new faces, practices have also helped to improve individual strengths and perfect team plays. The team benefits from the effort and dedication that these new teammates bring both on and off the field.

“My favorite memory from this year has been watching each player accomplish a play that she has been working on since the beginning of the season,” Ayna said.

“Each girl gave her all and made sure to play her heart out during this tough game and it paid off because we tied,” Abby said. “It was amazing to see their hard work and dedication because it meant that they got a lot out of this season, which made me proud. It was sort of a bittersweet moment because I knew this season was coming to an end.”