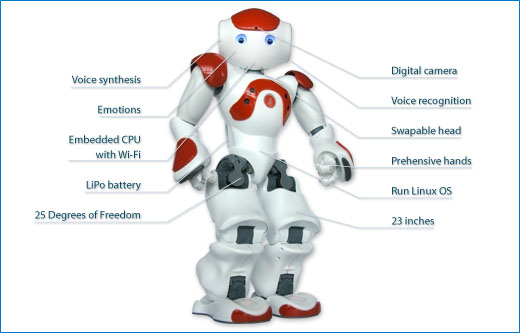 The NAO robot is welcomed into the 2013-2014 Convent of the Sacred Heart curriculum, as a part of the Robotics elective. Students will learn to program the robot and understand its various capabilities. Image courtesy of http://www.ubuntubuzz.com/.


The 2013-2014 Convent of the Sacred Heart school curriculum has recently added a new course to its variety of artistic, scientific and mathematic electives. Robotics has been introduced as an option for next year’s selections and will offer a new look at technology.
Sacred Heart is now the owner of an orange NAO Robot named “Storm.” The robot is 58 cm tall and has many advanced features, including a sensor network, two cameras, four microphones as well as speakers, LED lights and much more.
The Robot arrived to the Sacred Heart community Wednesday, May 8.  Students and faculty gathered in the library to open the box and watch the birth of the school’s newest member rise from his lying down position. (See video at the end of this article.) ­­­Sales representative for Teq, Ms. Mandy Dwight also came to watch the unveiling of the robot. She mentioned that Storm was the first robot that the company sold.
To bring Storm to life, the button located on the center of his torso was pressed, which caused its eyes to flash in many different colors. The robot proceeded to yawn and stretch and asked to be set in a comfortable position. He also mentioned that his battery was half empty. After Storm displayed his tai chi skills, he proceeded to erase all of his data and return to his original position.
“Its mechanics, gears and hardware are intended to inspire creativity and discovery,” Director of Educational Technology Mr. Karl Haeseler said.
Students participating in the Robotics course will learn to program the robot to perform various actions and tasks. Using Choregraphe, the robot’s corresponding programming software, students will be able to create NAO’s movements and first steps.
Students are able to make behaviors for the robot through the Python script, which is a programming language.
“Students will learn about the robot’s internal parts and how to control them through event-based, sequential or parallel programming,” Mr. Haeseler said.
The Robotics elective also develops students’ understanding of computer science, mathematics and science. The class will consist of teamwork, project management and exploring the ideals of locomotion, voice recognition and much more.
According to Mr. Haeseler, the Robotics course was added  to the Sacred Heart curriculum as a part of the school STEAM initiative.
“By exploring NAO’s capabilities, students will be engaged in problem-solving and critical thinking activities, which is a critical component of our school-wide Science, Technology, Engineering, Arts and Math (STEAM) initiative,” Mr. Haeseler said.
As of the end of the 2012-2013 school year, many students have already signed up to add the elective to their schedules for the upcoming academic year.
“We have a number of next year’s tenth and eleventh graders who have requested Robotics,” Upper School Assistant Head Mrs. Gail Casey said. “We expect that many of our incoming ninth graders will also be interested when they do their course registration in May.”
Sophomore Lauren Schwabe is one student who will be taking the course starting in the fall.
“I am looking forward to exploring the abilities of robots,” Lauren said. “Although I do not have any experience, I am so excited to discover the new robotic capabilities.”
Members of the Sacred Heart community have high hopes for the success of this new course for the 2013-2014 year.  Many believe that the Robotics course will generate new opportunities for students in the scientific, mathematic and innovate environments.
“Industry leaders and visionaries all agree that, in a few short years, Robotics will be as important as computers are today,” Mr. Haeseler said.