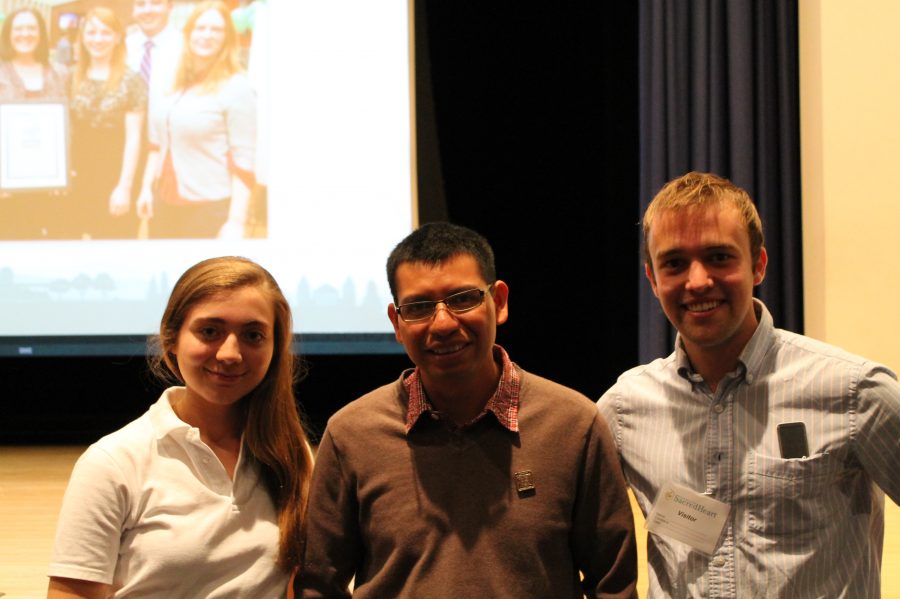 Looking past her school, town, and country, Senior Carolyn Schnackenberg advocates for the rights of people in Third World countries by promoting the Fair Trade movement.  Fair Trade ensures that Third World farmers receive fair wages for the products they make that are sold in First World countries.
Carolyn first decided to research the inequalities among workers for her “Making History” project in 8th grade after she was inspired by her friend from Colombia, Gladys Leon, who explained the positive effects Fair Trade had on workers in her community.
Carolyn has continued throughout her high school career to promote Fair Trade labor at Sacred Heart and in the town of Greenwich.
“I soon found that I actually enjoyed committing myself to a broader social cause within my community,” Carolyn said.
Carolyn recently invited Parker Townley, a representative from Fair Trade Towns, USA, and Miguel Mateo, a Guatemalan Fair Trade coffee farmer, to visit Sacred Heart and talk about the Fair Trade movements and its goals to protect workers’ rights worldwide.


She has also taught Sacred Heart third and fourth grade students the importance of supporting the movement in order  “to promote justice, community development and sustainability.”
Carolyn volunteered at the Boys and Girls Club in Greenwich where she showed students that they can help exploited farmers by purchasing Fair Trade products.
Carolyn’s most noticeable achievement, however, was campaigning to make Greenwich the first official Fair Trade town in the state of Connecticut in June 2011. She designed a Fair Trade town resolution that passed through Town Hall that states Greenwich’s commitment to the Fair Trade movement.
Carolyn received publicity from the Greenwich Times and the Greenwich Daily Voice for leading this movement.
Although Carolyn takes local actions to promote Fair Trade, by doing so, she is involved in a broader community.
“The most rewarding part about promoting Fair Trade, is that I am making a tremendous difference in the lives of people that I have never even met,” Carolyn said.
In the future, however, Carolyn hopes to deepen her understanding of the Fair Trade movement by  traveling to communities in Third World Nations that benefit from Fair Trade.”

“I would love to travel to Latin America,” Carolyn said. “Specifically Guatemala or Colombia, in order to visit Fair Trade co-ops and learn more about how the Fair Trade system operates within Latin American communities.”
Carolyn’s passion for this subject can be summed up in her statement about her purpose for promoting Fair Trade labor.
“I make a clear choice to act with responsibility in supporting the lost voices of so many workers who are too often silenced by overbearing and inequitable labor laws in third world nations,” Carolyn said.
By promoting Fair Trade in her own community, Carolyn is helping farmers half way around the world.