Against All Odds: A Sacred Heart alumna’s inspiring story 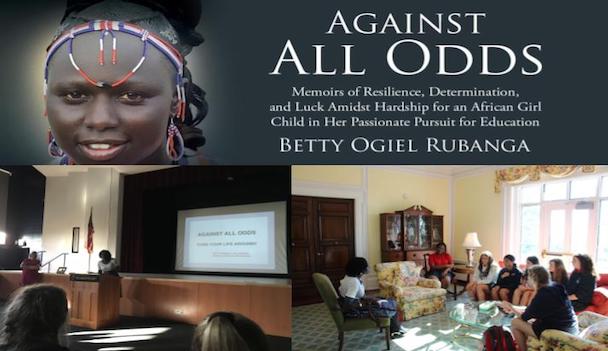 Against All Odds is a compelling novel of courage and perseverance, tracing the story of Mrs. Betty Ogiel Rubanga and her passionate fight for education in Uganda.  After attending two institutions in the Network of Sacred Heart Schools, Mrs. Ogiel Rubanga furthered her education at Makerere University, in Kampala, Uganda.  She is now an author and motivational speaker, traveling the world to introduce her story to students and young adults.

Against All Odds is an inspiring personal narrative that recounts the adversities Mrs. Ogiel Rubanga faced growing up as an orphan in an impoverished African country.  Her book was published in February 2017.

After suffering the loss of her father when she was three years old, Mrs. Ogiel Rubanga moved to her uncle’s home, away from her brothers, sisters, and mother. However, by her early teens, Mrs. Ogiel Rubanga was living alone in an empty house, illegally smuggling malwa, a local Ugandan brew, across the Kenyan border to raise money for her school tuition.  Mrs. Ogiel Rubanga held many responsibilities from a young age, including providing food, water, and shelter for herself, while also maintaining money for an education.

While Mrs. Ogiel Rubanga was attending Kangole Girls’ School as a teenager, a poisonous snake bit her.  She had no present family members to care for her, so the sisters at Kangole Girls’ School offered financial assistance to help her.  Although it was an extremely traumatic experience, Mrs. Ogiel Rubanga believed her snake bite was a blessing, as it brought her financial status to the sisters’ attention.

Eventually, with the help of the sisters at the Society of the Sacred Heart, Mrs. Ogiel Rubanga completed high school and attended Makerere University, the oldest and premier institution of higher learning in East Africa, according to againstallodds.life.  Here, she studied rigorously and competed in Track and Field, earning several recognitions in her age group as a female athlete.  However, Mrs. Ogiel Rubanga could not afford to sleep in the University’s dormitories, so she slept on the bleachers at the school’s stadium.

“Betty Ogiel is a true inspiration.  She has overcome so many obstacles and faced her struggles armed with a strong faith in God,” Mrs. Bader said.  “The example that she shows to all people, but especially to children of the Sacred Heart, is amazing.”

According to Mrs. Bader, Mrs. Ogiel Rubanga is currently the National President of the Uganda Association of Sacred Heart Schools (UASHA).  UASHA elected her for this position in June 2018.  In 2017, she was among the Top 40 Most Elite, Inspirational, and Influential Women under 40 in Uganda.

Mrs. Ogiel Rubanga dedicated her book to her family, coaches, and the sisters of the Sacred Heart, hoping to make its message of hard work and passion universal.

“This book is to inspire you to know that your labor of love is not in vain,” Mrs. Ogiel Rubanga says in Against All Odds.  “You don’t need to be opulent and rich to make a difference; you just need to care.”