Students use clubs to raise awareness for a cause 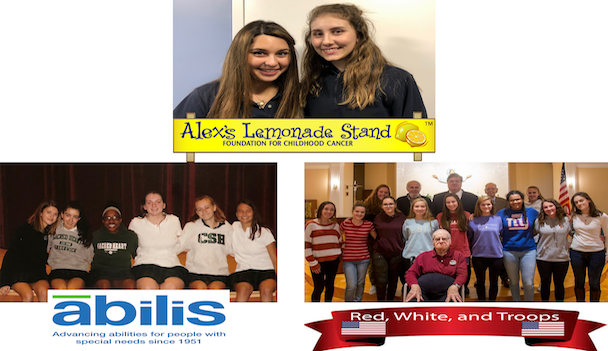 Juniors and seniors at Sacred Heart Greenwich have the opportunity each year to create or continue clubs that parallel their passions.  From Meditation Club to Model United Nations, there is a wide variety of groups that students can join and participate in.  Many of the clubs focus on community service and volunteer work, like the Abilis Club, The Lemon Club, and the Red, White, and Troops Club, all of which support different organizations.  With an abundance of options, Upper School students are invited to positively contribute to the Greenwich community and beyond.

As a school of the Sacred Heart network, Sacred Heart Greenwich works upon a foundation of goals and criteria.  Goal three inspires students to develop “a social awareness which impels to action;” Upper School clubs enable students to apply this goal to their daily lives.

Seniors C’Meijah Donaldson and Abby Knight run the Abilis Club, a group that raises awareness and funds for people with disabilities in Fairfield County.  Abilis is a non-profit organization that provides support for hundreds of individuals with special needs and their families. The organization has locations in Greenwich, Connecticut, and Stamford, Connecticut, according to abilis.us.

C’Meijah and Abby are members of the Abilis Youth Board, a committee consisting of local high school students who plan ways to raise money for Abilis within their individual school communities.  After the previous Abilis club heads graduated, C’Meijah and Abby wanted to continue its presence at Sacred Heart.

“We decided to keep [the club] here so that we could continue to keep our school involved,” Abby said.  “We know all about the events [Abilis is] planning. We can then share this information with our club members and the whole Sacred Heart community.”

The group promotes community service events that Abilis has organized, such as the annual Abilis Walk/Run, which took place Sunday, October 14, to raise money for the organization.  Abby and C’Meijah made announcements and sent emails to Upper School students and faculty to get students involved in this event.  C’Meijah and Abby also organized a civvies day which raised $654 for Abilis.

“This year we also had a competition with other high schools to see who could raise the most money from the Abilis Walk/Run,” C’Meijah said.  “This was a great way to get our school involved in our service and we were lucky enough to win this competition and a trophy.”

With a similar mindset to Abby and C’Meijah, juniors Jackie Prata and Daniella Tocco started The Lemon Club, which raises awareness for childhood cancer through Alex’s Lemonade Stand Foundation.  Alex’s Lemonade Stand Foundation is an organization that funds childhood cancer research.  Alexandra (Alex) Scott was only one year old when she was diagnosed with neuroblastoma, a type of childhood cancer.  Alex and her family held many fundraisers and raised over $1 million before she passed away in 2004, according to alexslemonade.org.

Jackie and Daniella plan to raise money and awareness for Alex’s foundation and hope to give Sacred Heart students the chance to help make a difference in cancer research.

“Students who participate also have the opportunity to meet families and community members affected by childhood cancer, which allows us to feel the direct impact of our help,” Daniella said.

Jackie volunteered with Alex’s Lemonade Stand Foundation this past summer at a camp at Villanova University.  Jackie’s experience at this camp influenced her decision to bring the club to Sacred Heart.

“In a single weekend we raised over $20,000 which really showed me that anything is possible when you are working with a passionate group of people,” Jackie said.  “That inspired me to start the club and after talking to Daniella about the foundation and its message she also felt very passionate about this topic.”

“I interviewed Alex’s parents and seeing their passion and drive to make a difference was what really inspired me,” Jackie said.  “I was so inspired by her that I knew I wanted to do something more with the organization rather than just raising money by myself which is why I really wanted Daniella to get involved as well as the community as a whole.”

After seeing Jackie’s documentary, Daniella sparked an interest in the organization and immediately wanted to get involved.

“After watching [Jackie’s] video I was really inspired by Alex’s Lemonade Stand Foundation and by Alex herself,” Daniella said.  “Alex was able to accomplish so much at such a young age, and has inspired us to continue her mission.”

Jackie and Daniella are looking to raise money on behalf of the organization by planning a lemonade stand sale with their club members.  They also hope to give a presentation to Upper School students to provide knowledge of Alex’s Lemonade Stand Foundation and the cause their group is supporting.

“High school students play a vital role in helping bring awareness and attention to the cause of childhood cancer by raising money for this foundation,” Daniella said.  “We want to encourage people who are not even in our club, to help out and become involved in a cause they may have overlooked.”

Juniors Cameron Calcano and Elle deAlessandrini are the club heads of the Red, White, and Troops Club.  Their group strives to raise awareness for veterans and the impact that war has on their mental health.  The club works in accordance with the Wounded Warrior Project, a charity that aims to assist veterans and service members who incurred a physical or mental injury, illness, or wound, while serving in the military, according to woundedwarriorproject.org.

“Our club aims to benefit the Wounded Warrior Project as well as spreads awareness about a wide variety of difficulties that our soldiers face off the battlefield,” Cameron said.

Cameron and Elle hope to use their club as a way to educate their classmates about the effects war and service may have on a veteran.  Elle emphasized the importance of recognizing the wounds that veterans return home with, such as Post Traumatic Stress Disorder (PTSD).  Roughly 400,000 service members live with some type of mental illness, including combat stress, Traumatic Brain Injury, depression, and PTSD, according to woundedwarriorproject.org.

To commemorate Veterans Day, Cameron, Elle, and their club members coordinated the Veterans Day Chapel, November 6.  The club also raised money from a civvies day, which will go directly to the Wounded Warrior Project.  The club hopes to spread awareness through the Upper School and give back to American service members who have fought for their country.