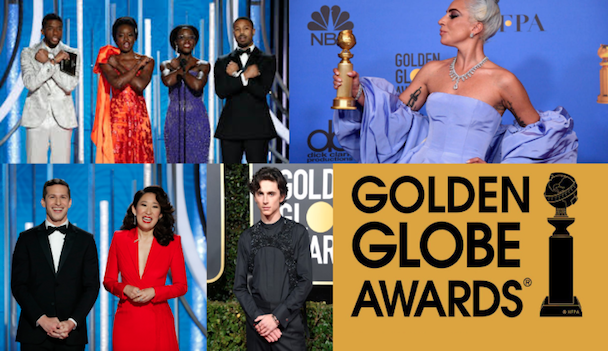 Canadian actress, Ms. Sandra Oh, and renowned Saturday Night Live actor Mr. Andy Samberg hosted the 76th annual Golden Globes Awards, Sunday, January 6.  In addition to hosting, Ms. Oh was a nominee and winner for her performance in Killing Eve in the “Best Actress in a TV Series” category.   The hosts had the traditional humor in their opening monologue, but also discussed a range of relevant topics including the lack of female nominees in numerous categories and the current growth occurring in the film industry.

“Next year could be different,” Ms. Oh said, according to washingtonpost.com. “It probably will.  Right now, this moment is real.  Trust me, this is real.  Because I see you.  And I see you.  All of these faces of change. And now, so will everyone else.”

Upsets dominated the 2019 Golden Globe Awards, according to chicagotribune.com.  The Hollywood Foreign Press Association (HFPA) nominated the film Vice in six categories, but it only came away with one win in the category “Best Actor in a Motion Picture, musical or comedy.”

The favorites to win this year were A Star Is Born and Black Panther.  Similarly to Vice, A Star Is Born competed in five categories but only won one award, “Best Original Song,” for their song “Shallow.”

The HFPA nominated Black Panther for three categories, but the film left the ceremony empty-handed.  Yet, in 2018, Black Panther surpassed famous movies such as Titanic, and became the number three movie in Box Office history, according to forbes.com.

The films Green Book and Bohemian Rhapsody were in the spotlight and both walked away with numerous wins, they shocked the audience with their impressive successes, according to sfgate.com.  The HFPA nominated Green Book in five categories and, at the end of the night, the film won three awards.  Bohemian Rhapsody won the night’s top prize, “Best Motion Picture-Drama,” according to, washingtonpost.com.

The Golden Globes also made history awarding American actor, Mr. Jeff Bridges, the “Cecil B. DeMille Award” to recognize his very celebrated career, according to goldenglobes.com.  The HFPA awards the “Cecil B. DeMille Award” to a nominee who makes “outstanding contributions to the world of entertainment,” according to goldenglobes.com

Additionally, Ms. Carol Burnett received the inaugural “Carol Burnett Award” for her dedication to comedy and her triumphs within Hollywood, according to The New York Times.  The “Carol Burnett Award” will be given out annually to a nominee during future Golden Globes ceremonies. This award honors a nominee who continually makes an impact on television both on and off the screen.

The “Best Director” category was once again lacking in female nominees. This is the fourth consecutive year that the nominees for Best Director have been all male. The last female winner was Ms. Barbra Streisand in 1984, according to people.com.

“That was 1984.  That was 34 years ago, Folks, time’s up!  We need more women directors, and more women to be nominated for best director.  There are so many films out there that are so good, directed by women,” Ms. Streisand said, according to twitter.com.

Another strong supporter of women in the filmmaking industry, Ms. Regina King, won “Best Supporting Actress” for her role in “If Beale Street Could Talk.”  In her acceptance speech, she challenged Hollywood and the film industry to keep fighting for women in media.