The Phantom of the Lennie and John de Csepel Theatre 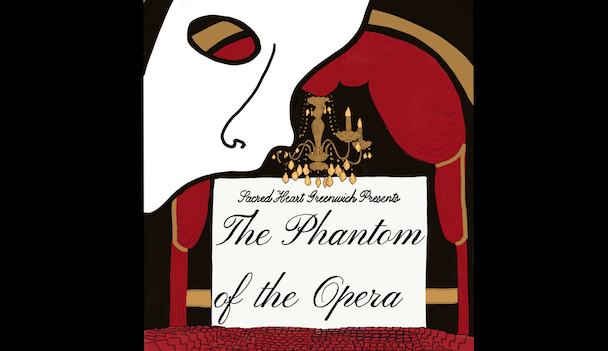 This weekend, the curtain opens on this year’s Upper School winter musical, The Phantom of the Opera.  The cast will perform Saturday, March 2 at 7 p.m. and Sunday, March 3 at 3 p.m. in the Lennie and John de Csepel Theatre.

For over 30 years, The Phantom of the Opera has been on Broadway and now holds the title of the longest-running Broadway show, according to playbill.com.  British composer Sir Andrew Lloyd Webber and British songwriter Mr. Richard Stilgoe wrote the musical based on French journalist Mr. Gaston Leroux’s horror novel, first published in 1910, according to broadway.com.

The musical conveys the story of “the Phantom,” a deformed composer who lives in an underground cavern beneath the Paris Opera house.  The Phantom composes operas for Christine Daaé, a member of the Ballet Chorus with the gift of a beautiful voice.  When a handsome suitor, Raoul Vicomte de Chagny, enters Christine’s life, the Phantom begins terrorizing the owners and company of the Opera, according to broadway.com.

In the Sacred Heart production of The Phantom of the Opera, senior Sara Hecht plays the role of Christine and junior Zada Brown plays the role of the Phantom.  Both Sara and Zada have participated in past musicals, including the last Upper School musical, Jesus Christ Superstar.

The cast of the musical is looking forward to opening night, and Zada is especially excited for the opportunity that she has to play the Phantom.

“I really like being able to wear the mask, because it’s a really iconic piece of the costume,” Zada said.  “I also really enjoy being able to tell the story of this character and challenge the audience to reconsider what they think the show’s all about.”

Miss Michaela Gorman ’05, Upper School Theatre Teacher and Director of Theatrical Productions, is directing the production of The Phantom of the Opera.  Miss Gorman chose this year’s production because she wanted to give her students new opportunities.

“I’m always trying to choose pieces that will help our theatre program grow and evolve,” Miss Gorman said.  “I’m really, really proud of the theatre students for taking on this challenge.”

Miss Gorman said that rehearsal is her favorite part of the day because she enjoys guiding her students as they put together such a well-known and challenging production.

“Phantom is a big show,” Miss Gorman said.  “I wanted to give our theatre students the opportunity to take something that’s big and traditional like that and make art that’s uniquely theirs.”

Miss Gorman, Miss Gennaro, Mr. Lowery, and Mrs. Gifis help the cast develop their production of The Phantom of the Opera in a distinct way.  The choreography of the musical incorporates a wide selection of dance styles ranging from traditional ballet to abstract movements.  Specific dances also become a part of a character’s identity and are repeated in different ways throughout the performance.

Sara is most looking forward to the audience’s reaction to the Upper School production of The Phantom of the Opera.

“There are some really famous songs, like ‘Masquerade,’ for example, that have very specific dances and costumes that people associate with it,” Sara said.  “I’m excited to see everyone’s reaction to our take on it.”