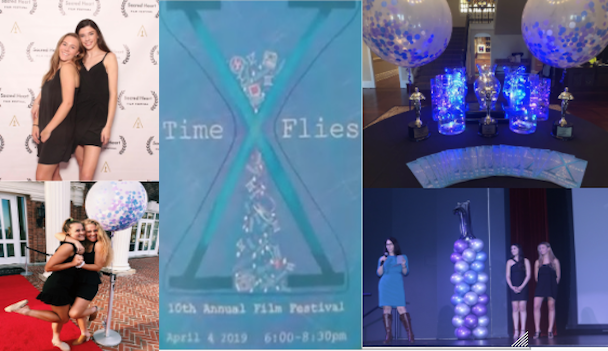 Thursday, April 4, students, faculty, alumnae, and family gathered in the Lennie and John de Csepel Theatre for the tenth annual Film Festival.  Sacred Heart Greenwich Upper School Broadcast Journalism students hosted, organized, and showcased their films at the “Time Flies” themed event.
Broadcast Journalism students began working on their projects for the Film Festival at the beginning of the school year, finalizing their films by the end of December.  Students in the Real World Film-making, Creative Film-making, Today from the Heart, and Beginner Broadcast Journalism classes all worked to produce films to enter into the festival.

Seniors Lorraine Rinaldi, Grace Thompson, Katherine Santoro, and Gigi Jervis hosted the event and also had specific leadership roles in putting the show together.  Lorraine and Gigi were Film Festival Chairs and Creative Directors, Katherine and Grace were Assistant Film Festival Chairs and Assistant Creative Directors. Senior Roxanne Kassapidis also took on a leadership role as the Film Festival coordinator.
Lorraine shared how she and her fellow hosts prepared for the festival and expressed her love for the event.
“I was thrilled to be a co-host and co-chair of the 10th annual Sacred Heart Film Festival because it has been a dream of mine since I was seven years old and attended the very first Sacred Heart Film Festival that featured my older sister’s film,” Lorraine said.  “All of the Film Festival hosts and executive staff members prepared by rehearsing nearly every day up until the big event, getting everyone excited for it by posting on our Instagram page, and of course making sure all of the plans for the night of were in order.”
The panel of judges for this year’s festival included Mr. Rob Burnett, five-time Emmy Award-winning writer, producer, and director, Ms. Shelly Tatro, an Emmy Award-winning producer, and two former Sacred Heart students, Ms. Erin Manning ’13, and Ms. Jenna Hascher ‘13.

Mr. Burnett judged the “Creative” films and announced the winner of that category.  He recently wrote and directed The Fundamentals of Caring, a 2016 American comedy-drama film based on the 2012 novel, The Revised Fundamentals of Caregiving, according to imdb.com/name/nm.
The “Documentary” category judge Ms. Tatro is the Senior Vice President of Development and Programming for Arts and Entertainment (A&E) Network.  Ms. Tatro joined Video Hits One (VH1), a television series based in New York City owned by Viacom, in 1996 as Director of Series & Specials, and served as the Senior Vice President of Production & Programming from 2003 to 2013.
Ms. Manning was the judge for the “Public Service Announcement” (PSA) category.  Ms. Manning works at Sesame Workshop, an American nonprofit organization that produces many educational children’s programs.  She graduated from Northwestern University with a degree in Radio/Television/Film and Business.
“Experimental” category judge Ms. Hascher is a Director and Producer’s Assistant at Blue Sky Studios.  Ms. Hascher received her degree in Radio/Television/Film and Business from Northwestern University.
After the films from each category played, the judges announced the winners.  In the PSA category, The Future is Now by juniors Georgia Ferguson, Kate Murray, and Daniella Tocco won second place, and One by junior Gabby Petrizzo won first place.
In the Documentary category, The Gatekeeper by junior Daniella Tocco won second place, and Live Like Oaks by junior Sophia Georgas won first place.
In the Experimental Film category, junior Olivia Andrews won second place for Against the Clock and sophomores Naomi Buccieri and Rachel Keefe won first place for Static.
Finally, in the Creative category, sophomores Naomi Buccieri, Rachel Keefe, and Lé-Anne Johnson won second place for Behind the Screen, and Just Relax by seniors Roxanne Kassapidis and Lorraine Rinaldi won first place.
During the Film Festival, the audience watched a video about the alumnae who previously attended Sacred Heart.  The video encapsulated the overall themes of Sacred Heart’s past ten Film Festivals.

Towards the end of the Festival, the hosts asked the audience to vote for the Audience Choice Award.  Members of the audience texted their vote to a number shown on the screen.  Freshmen Ava Cobb and Grace Gasvoda’s film The Real News won the Audience Choice Award for the PSA category.  In the Documentary category, junior Sophia Georgas won for Live Like Oaks.  Roxanne won in the Experimental category for H2O, and in the Creative category, junior Lily DeConcini won for Blast from the Past.
Studio Director and Broadcast Journalism Teacher Ms. Ellyn Stewart reflected on the hard work the students put into the festival and the accomplishments the students had at other festivals this year.
“The 72 broadcast and filmmaking students have been working incredibly hard since September to plan for this festival,” Ms. Stewart said.  “Their films have recently won 19 out of 21 awards at the Greenwich Youth Film Festival, and many of those films [made] their Sacred Heart debut on Thursday.”