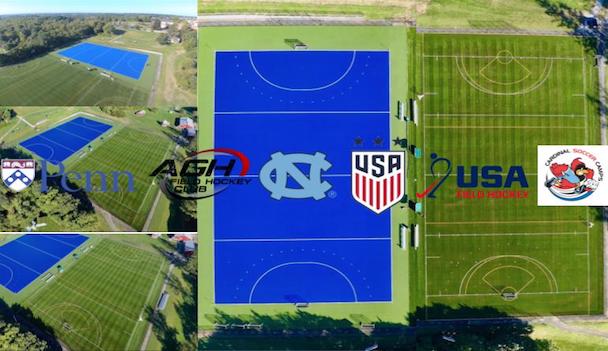 Once Sacred Heart Greenwich team practices and games are over, the Magnetti and Sheehan fields go to rest until the next day.  Recently, however, the school has made a push to invite local and collegiate teams, clinics, and camps to host their activities on the renowned, high-technology fields, hoping to expand the love of sports and use of the facilities all year round.

Each day, field hockey Sports Specialist and Functional Strength Coach Mr. Alexandru Gheorghe practices with his field hockey club, AGH Field Hockey Club.  In the winter, his players practice inside on the athletic center’s new gymnasium basketball courts. in the spring, his teams move outside to the new, water-based field hockey turf.

Mr. Gheorghe also initiated a USA Field Hockey event last year in August.  The US Men’s Under 19 Junior National Field Hockey Team hosted a clinic August 6, 7, and 9, 2018.  Each night concluded with a match between the junior team and Chile’s national team.  The clinic was free and available to both boys and girls.

Along with daily practices, Sacred Heart also hosts special one-day events.  The University of Pennsylvania (UPenn) Women’s Lacrosse team recently traveled to play Brown University, stopping at Sacred Heart for a practice April 5.  Currently, the National Collegiate Athletic Association (NCAA) ranks UPenn as the thirteenth best Division I team in the country, according to ncaa.com.  The Sacred Heart varsity lacrosse team had the chance to watch UPenn players practice and learn some skills from their game.

Head coach of Sacred Heart varsity lacrosse, Mrs. Tara Clough, was thrilled that her players had a chance to watch a nationally-ranked, Ivy League lacrosse program prepare for a game.

“It was a fantastic opportunity to host the University of Pennsylvania’s Women’s Lacrosse Team,” Mrs. Clough said.  “Hosting their practice provided our Upper School students an opportunity to watch the next level and grow in the game.  They were very impressed with the level of intensity, communication, and pace.”

UPenn lacrosse is no stranger to Sacred Heart.  Alumna Tory Bensen ‘11, daughter of Mrs. Jenn Bensen, Head of the Upper School, furthered her education and athletics at UPenn.  She played lacrosse for four seasons, finishing with 148 career points, and earning accolades such as the Ivy League Attacker of the Year in 2015.  UPenn’s team plans to return to Sacred Heart April 26 for another practice.

The University of North Carolina (UNC) Women’s Lacrosse team will also utilize Sacred Heart’s lacrosse field to host a camp this summer from July 15 to July 16.  The year-old installation includes new technology which enables shock absorption, improving the long-lasting performance for ball roll.  Players at the US Lacrosse Headquarters and Training Center in Spark, Maryland, use the same surface for their training.  Currently, the NCAA ranks UNC as the third best women’s lacrosse team in the country, according to ncaa.com.

Ms. Elizabeth Dennison, Director of Athletics, believes that allowing other programs to use the school’s facilities will help grow the love of sports.

“Hosting events such as the upcoming UNC Lacrosse Camp, the Megan Rapinoe Soccer Clinic this past October, and the USA Field Hockey U-19 Junior National Team event and clinic this past August all provide opportunities to learn, train, and compete from and with high level coaches and players – and only further encourages young women to participate in sport,” Ms. Dennison said.  “The popularity of these events, and our own athletic teams, highlights the support of athletics in our community and helps to show younger students what sports can do – preparing and encouraging them to participate in our robust programs here at Sacred Heart.”