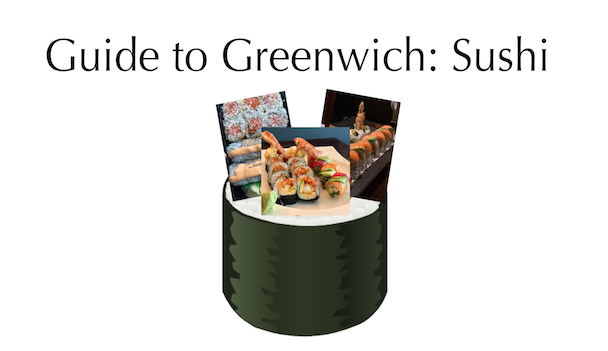 For this edition of Guide to Greenwich, we journeyed through Greenwich to review different sushi restaurants.

The first restaurant we stopped at was Kira Sushi, located on a side street off of Greenwich Avenue.  The bar where the chefs prepare the sushi is on one side of the restaurant, but it is visible and allows the customers to see their food’s preparation.  The local Japanese restaurant was very busy when we arrived, but the staff was friendly and welcoming.  Kira Sushi offers a variety of 58 types of sushi.  We chose to order the Shrimp Tempura Roll for $9.25 and the specialty Volcano Roll for $15.95.
Our two sushi rolls were brought promptly to our table.  Firstly, we tasted the Shrimp Tempura Roll consisting of avocado, cucumber, and warm shrimp tempura.  The roll was topped with mayonnaise.  The different elements of the roll formed a perfect, tasteful combination.  The dish was filling yet easy to eat, which left us wanting more.

Next, we sampled the Volcano Roll, filled with spicy crab and cucumber, and topped with salmon, avocado, and tempura flakes.  The freshness of the avocado and cucumber in addition to the spice of the crab created a delicious sushi roll.

Less than ten minutes after ordering, the waiter brought the Rainbow Roll, one of their best-selling sushi rolls, to our table.  The Rainbow Roll was a typical California Roll with crab, cucumber, and avocado, but had a variety of fish, such as tuna, salmon, and yellowtail, on top.  The roll is named after the vibrant color of the fish.  The extra fish added a new element to a usually simple California Roll.  However, this roll was not as fresh as the sushi we had tried at Kira Sushi, but was still tasty and filling.

Next, we tried the Lobster King Roll, which comes with ten pieces as opposed to the standard eight.  The roll was made of lobster tempura, spicy tuna, avocado, and spicy mayonnaise.  It came out with two large lobster tails sticking out the two end pieces.  The roll was slightly spicy, but the avocado helped balance this out, which created a satisfying combination.

Next, we tried the Spicy Crunchy Tuna Roll topped with tempura flakes, which added an additional element to the soft tuna.  The tuna in the roll was served cold unlike the warm Lobster King Roll from Abis.  However, the tuna was flavorful and neutralized the spice that came from the spicy tempura flakes.

Winner
After trying all six sushi rolls from three different Japanese restaurants, the winner of this edition of Guide to Greenwich is Kira Sushi.  The sushi tasted very fresh, and the combination of the different flavors created two delicious rolls.  The decision was made easy for us once we tasted the Shrimp Tempura Roll, as the warm shrimp perfectly complimented the avocado and cucumber.
– Natalie Dosmond and Sofia Pye, Staff Writers
Featured Image by Natalie Dosmond ’21