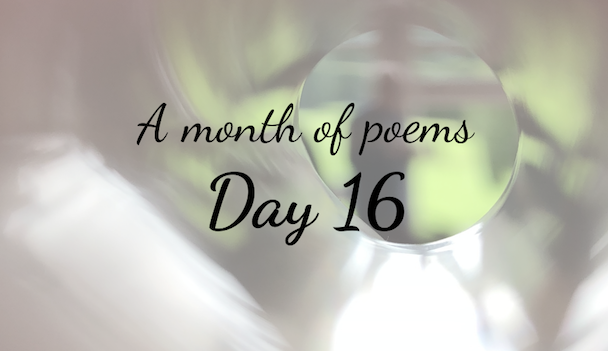 This April is the 24th National Poetry Month, a celebration established and organized by the Academy of American Poets.  Throughout the month, there are a number of specific events including Poem in Your Pocket Day, April 18, and the Dear Poet project.  Every school day this month, the King Street Chronicle will publish one poem in honor of National Poetry Month.

Originally published in Wizards in Space Literary Magazine
Ars Poetica II
Bell Choir Director Miss Danielle Gennaro ’05
she was hard to watch,
a hypnotic human junkyard,
made of parts that never worked
so well as when they broke off, stopped
trying to be what they were and started
trying to be.
she sure was something to look at,
even though sometimes she wasn’t;
her clothing might have been white
once, now
a dirtier version of itself. and her
skin was deep and cracked like dry canyons that
people wanted to visit, but no
people wanted.
and when she would talk, you’d wish
you could be in two places
at once:
forever with her, forever gone.
the things she said when you
might have been listening weren’t always
supposed to be true:
they were just things.
and even though they weren’t always
beautiful, they were always
beautiful.
– Sydney Kim, Opinions Editor
Featured Image by Sydney Kim ’20