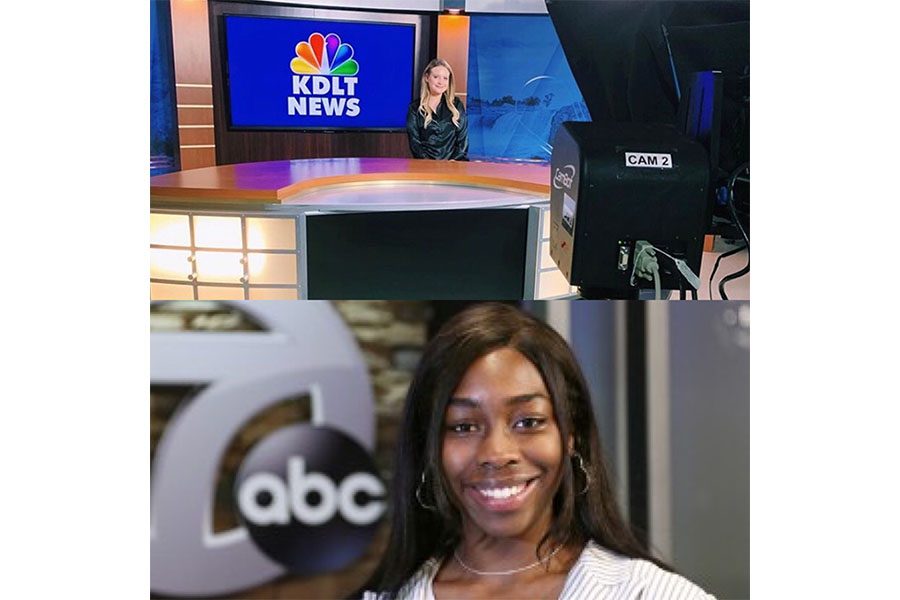 Sacred Heart Greenwich alumnae Ms. Grace Finerman ‘15 and Ms. Jessica Johnson ‘15 have launched their careers, paths which began in high school.  After college, these two journalists pursued their passions.  Ms. Finerman and Ms. Johnson are reporters for news stations WKBW-TV and KDLT-TV, respectively, where they interview, edit, and broadcast.

Ms. Johnson graduated from the S.I. Newhouse School of Public Communications at Syracuse University.  Now, she works for WKBW, under Edward Willis Scripts, the American Broadcasting Company 7 Eyewitness News in Buffalo New York.  Ms. Johnson found the job market to be competitive but persevered through the process.

“A lot of schools recruit at Newhouse, and WKBW is one of them,” Ms. Johnson said.  “They take four Syracuse students into their program every year, and it’s by far the most competitive recruiter.  Like all jobs though, you have to apply, get chosen to take a written test and then chosen to interview.”

As a new journalist at KDLT, Ms. Finerman is responsible for a multitude of tasks, including shooting videos, writing scripts, reporting live for breaking news, editing, fronting or reading from a teleprompter in the studio, interviewing individuals, and writing stories for the news.

Ms. Johnson does similar tasks at work.  She interviews, edits, writes and produces stories for the news, oftentimes in the span of eight hours.  This process is called “turning a package.”

Through her reporting, Ms. Johnson enjoys connecting with different people who share stories that are incredibly eye-opening for her.  She is particularly grateful for her subjects’ willingness to welcome her into their lives and journeys.  Ms. Johnson recalls a young boy who served as an example of the effects of her job.

“I ran into a boy I interviewed for a story and he was so happy to see me, gave me a hug, made us take pictures together and wouldn’t stop raving about how much he liked my piece,” Ms. Johnson said.  “And to me, that’s what makes my job all worth it.  Knowing I did my subjects justice and was able to translate the energy and connection made between us in that hour into a video that shows the rest of the world who they are.”

Both Ms. Finerman and Ms. Johnson credit a big part of their passion for their jobs to their Sacred Heart education.  Notably, Ms. Finerman commends Sacred Heart for teaching her how to write, which is a large aspect of her career.

“I learned how to write at Sacred Heart,” Ms. Finerman said.  “Writing is so important and a lot of people think that television news is all about being on TV or the videos and all of that.  But in order to be an effective storyteller, you have to be able to write.  When I went to college I was ahead of the game, and because of everything I learned at Sacred Heart I’m able to be really effective and quick.”

Ms. Johnson points directly to Sacred Heart for giving her the courage and power to seek out journalism as a career.  At Sacred Heart, Journalism and Broadcast Journalism are courses offered for students in the Upper School, and Ms. Johnson took both.

“I remember when I first started anchoring for Today From the Heart and all the teachers would come up to me and tell me I was a natural and such a good speaker,” Ms. Johnson said.  “I think that was the first time I actually thought I could make journalism a career and potentially be good at it too.  Sacred Heart gave me the confidence to turn journalism into a career.”

Ms. Finerman describes her tasks as overwhelming, however, an aspect of her work that she loves is getting to meet a different person each day.  According to Ms. Finerman, this is what makes her profession worth it.