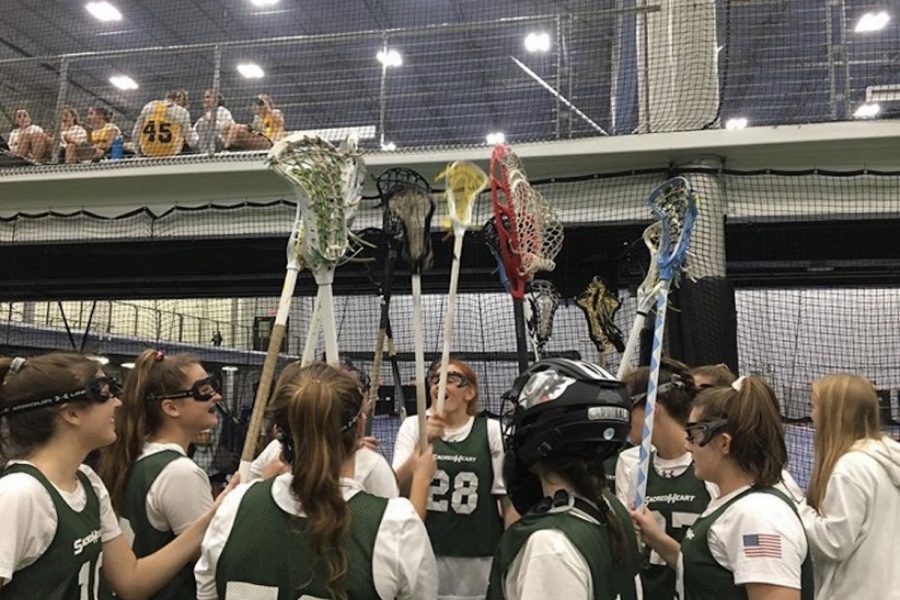 The 2019 varsity lacrosse team at the Inside Lacrosse Indoor National Championship.

Sacred Heart Greenwich’s varsity lacrosse team competed in the 2020 Inside Lacrosse Indoor National Championship for the second year in a row January 4 and 5.  Despite losing all three games, the team, with the leadership of their captains seniors Amelia Sheehan, Katie Keller, and Morgan Smith, looks to add to its successful 2019 season this spring.

The largest indoor sports complex in North America, Spooky Nook Sports, located in Lancaster, Pennsylvania hosted the high school tournament, according to spookynooksports.com.  This invitation-only event featured the top 32 high school teams in the country.  Sacred Heart’s varsity lacrosse team earned their spot at the tournament after finishing the 2019 season ranked as the twenty-first team in the nation.

The team started off January 4 with a loss against Episcopal Academy 20-15.  They then competed against American Heritage School January 5, losing 32-15.  The team battled against Our Lady of Good Council January 5 falling short 25-24.  The team’s overall record was zero wins and three losses.

Amelia reflected on her goals for the upcoming season and her mindset on working to improve from the tournament.

“I think that our team needs to rebuild the chemistry that we had last season,” Amelia said.  “Along with this, our team needs to have a winning mentality so that we can truly compete against some of the best teams in the country.”

Amelia shared her excitement about the addition of Ms. Aly Messinger, the new Assistant Director of Athletics for Operations and Leadership Programming, Varsity Lacrosse Coach, and Director of Lacrosse Development, to the team.

“This season Coach Messinger is our new head coach,” Amelia said.  “Her knowledge of the game is something I admire and the whole lacrosse program is so lucky to have her.  Her husband, Mr. Joe Costigan, was our coach this past weekend at the Inside Lacrosse Tournament.  It was such an incredible opportunity to be coached by him.  His competitive energy and support really sparked us to leave it all out on the field.”

Alongside Mr. Costigan, two Sacred Heart alumnae, Ms. Ryan Smith ’19 and Ms. Hilary Hoover ’19, shared their knowledge of the sport to help coach the team.  Ms. Smith is currently a freshman on the Boston College women’s lacrosse team, and Ms. Hoover is also a freshman playing for Cornell University.

After the competition ended, American Heritage School brought the Inside Lacrosse Indoor National championship title back to Boca Delray, Florida for the first time in tournament history, according to insidelacrosse.com.  After the 2019 season, Inside Lacrosse ranked the team eighth in the country.

Caitlyn commented on how the competitive nature of the tournament will help her team improve for their upcoming season.

“I like the Inside Lacrosse tournament because my team and I are able to compete in every game against the best competition in the country,” Caitlyn said.  “Every game we played was hard and intense and made us all better individually and also brought us together in a team perspective.”