Looking back at technology over the decade 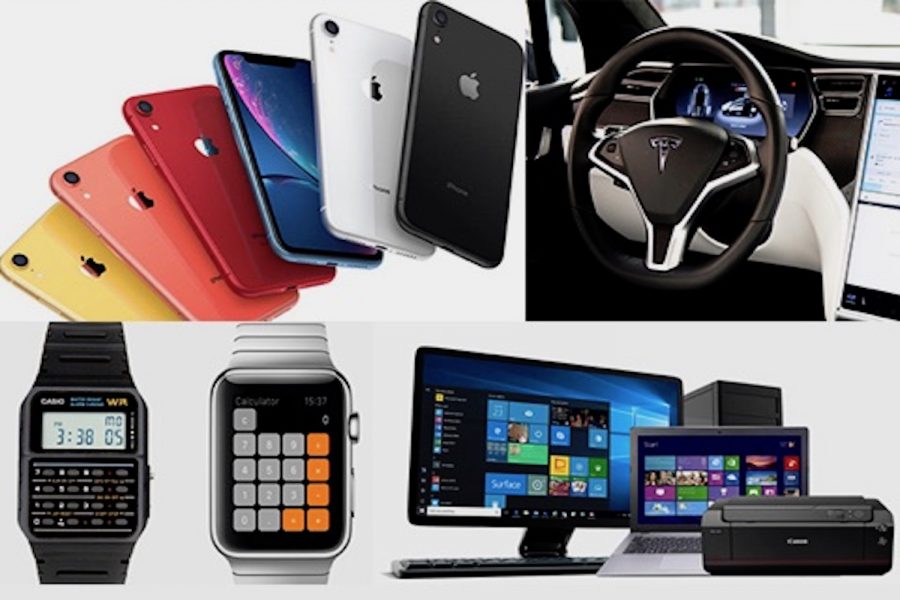 The iPhone, Tesla cars, and the Apple Watch are a few of the different types of technology that have impacted the past decade.

Over the past decade, technology has become more accessible and has progressed with new inventions from companies such as Apple, Amazon, Tesla, and Grubhub.

Apple Incorporated, an American multinational technology company, created over 15 different iPhones this past decade, each one more technologically advanced than the other.  Mr. Steve Jobs founded Apple in 1976, and the company continues to update the iPhone with different technological tools and advancements, which now allow users to make phone and video calls, access over 1.8 million applications, and capture videos and pictures, according to statista.com.  Senior Elisa Howard, co-head of the robotics team, recognizes the multitude of changes that Apple has made to their products over the decade.

“I think the most noticeable change in the iPhone is the camera resolution,” Elisa said.  “The iPhone 11 has a new dual-camera system that has enabled users to capture high-quality photos and 4K videos.  I think technology will become easier to use, more effective, and further integrated into everyday life.  In particular, artificial intelligence will continue to develop, and various technological machines will further perfect human imperfections.”

Mr. Jeff Bezos, founder and Chief Executive Officer of Amazon, released the Amazon Alexa November 2014.  Alexa is a voice-controlled household appliance that plays music, reads the news aloud, orders groceries, and answers simple questions, according to businessinsider.com.  Similarly, the HomePod, released by Apple February 2019, is a speaker that can also control many household functions, such as turning off the lights, sending text messages, making phone calls, or setting an alarm, according to techradar.com.

In 2015, Apple, now under the direction of Chief Executive Officer (CEO) Mr. Tim Cook, reinvented the idea of a watch with the release of the Apple Watch, according to cnn.com.  In contrast to a traditional watch, the Apple Watch, when connected to an iPhone, allows users to make calls, send texts, receive notifications, and use applications from their wrist.

Apple AirPods, first revealed September 2016, feature a built-in microphone that filters out background noise and a wireless Bluetooth connection, which enables users to make phone calls and listen to music without the need for a cord.

Tesla, an American automotive and energy company, created three models of cars between 2012 and 2019 that include an advanced driver-assistance system with lane centering, adaptive cruise control, and self-parking, according to tesla.com.  Mr. Elon Musk’s mission through his company, Tesla, is to accelerate the world’s transition to sustainable energy by producing all-electric vehicles that also generate infinitely scalable clean energy, according to tesla.com.

The creation of food delivery services, such as Uber Eats, Grubhub, and DoorDash allow people to order food, delivered to their front door, from a wide variety of restaurants close to where they live.  One can access these services through applications on a mobile device.

Throughout the decade, laptops became more efficient and convenient than ever before through consistent upgrades and improvements, according to macworld.com.  Mr. Dana Ashton Jr., Network Administrator, emphasized the difference between the laptops from ten years ago and those of today.

“The most obvious change to the laptop over the past ten years is the size and weight,” Mr. Ashton said.  “The first true laptops were very heavy and had small screens.  Now laptops take the form of tablet-like devices like the Microsoft Surface to the iPad Pro with near-instant on power.  They also have excellent High Definition (HD) screens, unlike the older models that had pretty poor screens.”