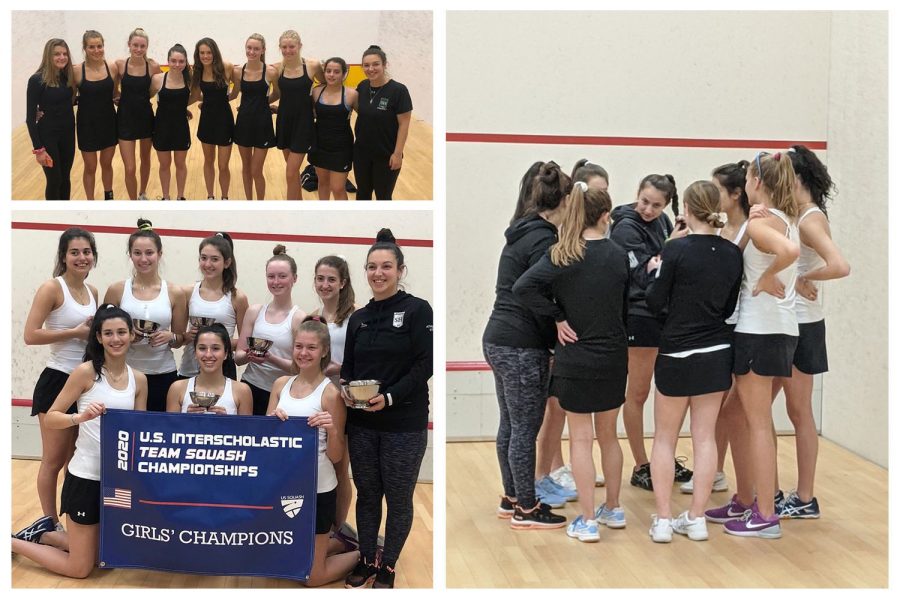 The Sacred Heart Greenwich Varsity A and Varsity B squash teams competed in championship tournaments this month.

Both varsity teams are under the direction of Mrs. Celia Pashley, Sports Specialist.  Mrs. Pashley began coaching squash at Sacred Heart in 2013, and later accepted the position of Sports Specialist and Assistant Strength and Conditioning Coach at the start of the 2015 academic year.

“We keep practices tough but fun, I think there is a great atmosphere within the squash community at Sacred Heart and we hope as coaches that we are a part of why players want to play squash and keep improving,” Mrs. Pashley said.

The Varsity B team finished first overall at the championship tournament, winning all three of their matches.  The Varsity B team defeated St. Paul’s School by a score of 6-1.  The team progressed and upended the Moses Brown School junior varsity team 7-0.  Finally, Sacred Heart defeated Tabor Academy 7-0.

The Varsity B team is made up of seniors Cameron Calcano, Georgia Ferguson, Grace Nemec, Arielle Uygur, and Julia Welsh, sophomore Nicole Mayer, and freshmen Mackenzie Coleman, Sophia Morales, and Kourtney Ulmer.  Georgia appreciated the team’s hard work to prepare for the tournament.

“Leading up to Nationals we definitely focused on our technique and endurance,” Georgia said.  “Squash is not an easy sport and you have to maintain a certain level of fitness in order to play your best.”

The Varsity A team entered their Championship tournament with the number four seed, the highest ranking in school history.

“In the future, I think it’s the team’s goal to beat Greenwich Academy,” Katie said.  “We are taking steps in the right direction by winning two of the matches on Saturday, but we still have work to do.”