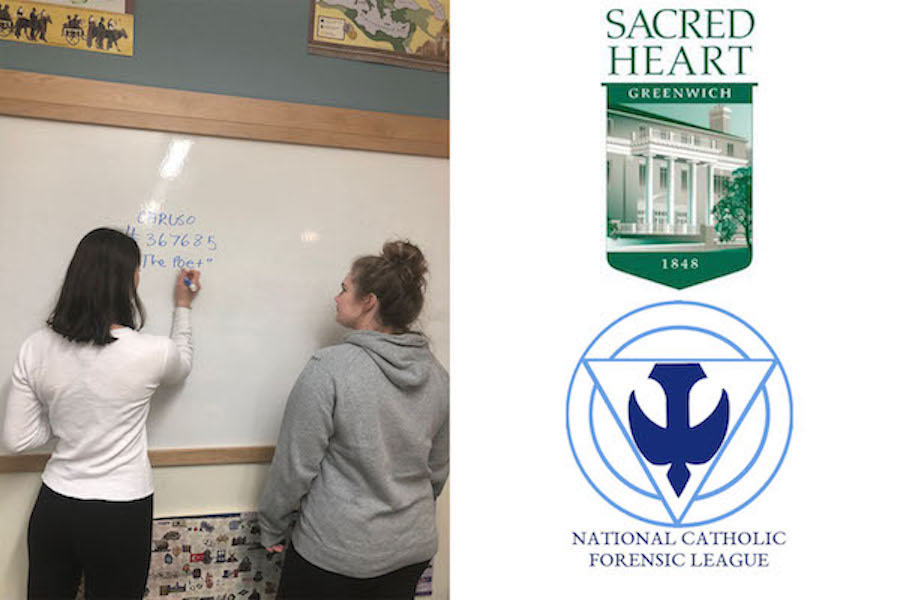 The Sacred Heart Greenwich Speech and Debate team hosted the twenty-first annual Speech and Debate Tournament February 1.  At the event, teams from schools in the tri-state area who are part of the New York Catholic Forensics League (NYCFL) competed against each other.  The tournament offered different speech and debate categories, some that focused on traditional forms of debate, and others that blended speech, performance, and poetry.

“Having a leadership position on the Speech and Debate team this year has been so much fun,” Piper said.  “I’ve loved helping the underclassmen find categories they enjoy and thinking about ways we can continue to build the program next year.”

Sacred Heart’s Speech and Debate team allows students to explore categories that cater to a variety of interests.  It also encourages them to develop their public speaking skills and share their opinions.

Members of the team have the opportunity to sharpen their debate and public speaking skills at the various local Speech and Debate competitions that other schools affiliated with the NYCFL host.

The Sacred Heart Speech and Debate tournament was one of the most attended NYCFL tournaments this year, with 170 student competitors from 15 different schools.  The tournament allowed students to compete in speech events of Duo Interpretation of Literature, Dramatic Performance, Declamation, Varsity and Junior Varsity Extemporaneous Speaking, Original Oratory, Varsity and Junior Varsity Oral Interpretation of Prose or Poetry, and a debate event of Student Congress.

Student Congress, the only debate-style competition offered at Sacred Heart’s tournament this year, allows participants to adopt the position of a Senator and give speeches discussing current domestic and international events.  In Student Congress, students are able to use their passion for politics or current events to improve their speechmaking and debate skills.

All of the speech categories allow students to combine an interest in theater with public speaking.  The majority of the speech events involve performing a written statement or poem.

Students in the Oral Interpretation category study, analyze, and perform two written pieces, one poetry and one prose.  Competitors have to use their voices and body language to deliver the ten-minute pieces to the judges in a dramatic and compelling way.

Piper encourages students to join the Speech and Debate team because she believes it develops verbal and collaborative skills.

“On the Speech and Debate team, girls can develop and enhance their public speaking, critical thinking, communication, and persuasive skills in both speech and debate categories,” Piper said.  “At tournaments, girls can learn from other competitors and showcase their hard work.”