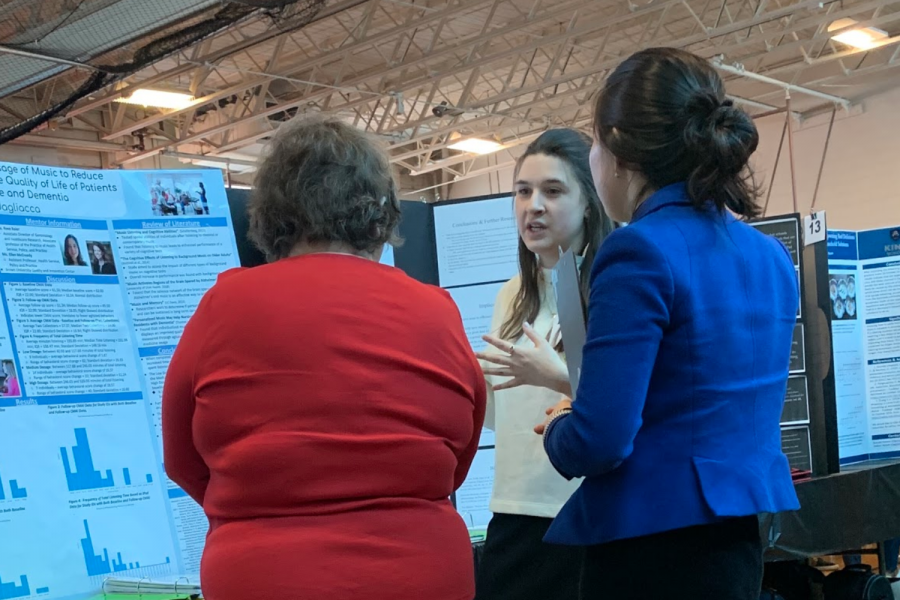 Fifty Sacred Heart Greenwich students attended the annual Connecticut Science, Technology, Engineering, and Mathematics (STEM) Fair February 8.  These students, all of whom are in the Upper School Science Research program, traveled to the Joel Barlow High School in Redding, Connecticut to present their research projects and compete for various awards and honors.  This year, the judges recognized 12 Sacred Heart students for their research proposals and projects.

Under the guidance of the Upper School Science Research program and Ms. Mary Musolino, Upper School Science Teacher, these students displayed a total of 35 projects at the 2020 Connecticut STEM Fair.  Since the Connecticut STEM Foundation created this event in 2001, it has grown to host students from 19 high schools across the state with 254 distinct research projects this year.

Ms. Musolino enjoys mentoring the students in the Science Research program and helping them prepare for the annual Connecticut STEM Fair.

“I love seeing the student projects come together, from an idea and research question to a completed project,” Ms. Musolino said.  “This year’s projects were particularly strong, and the students worked hard to prepare for the fair.”

They won first place for their completed research project, and the judges invited them to the Connecticut Science & Engineering Fair.

“Prior to the fair, Abby and I, along with Ms. Musolino, spent almost every lunch period running tests in the research lab,” Annie said.  “The Science Research program has enabled us to connect with various accomplished and admirable mentors, who have helped to further our research with their expertise.”

They were inspired to pursue their project after seeing the impact of pollution on their local beaches.

“During the summer, we went to our local beaches and noticed they were often closed because of dangerous algae blooms,” Annie said.  “We decided to investigate the cause for this, and ended up uncovering the more pressing and deeper cause of this, which is storm drain runoff.”

Freshman Claudia El-Masry received third place for her proposal in the Health and Medical category.  Her research, “Testing E-liquid Products used for Vaping Pods for Microbial Endotoxin Contamination,” focused on the health risks that products used in vaping pods pose.

Sophomore Isabelle Berkery received third place for her research proposal in the Behavioral category.  Titled “Using Brain Scans To Determine if the Amount of Training That a Service Dog Receives Leads to Improvements in The Amygdala and Caudate,” her project proposal stemmed from her passion for animals.

After her recognition as a finalist in the Regeneron Science Talent Search, senior Caroline Badagliacca received second place at the Connecticut STEM Fair for her completed research project.  Her project, titled “Music and Memory: The Ideal Dosage of Music to Reduce Agitated Behaviors and Improve the Quality of Life of Patients with Alzheimer’s Disease and Dementia,” was in the Behavioral category of the fair.

For her completed research project “Remediating Pharmaceutical Pollution: The Effect of Boron Doping on the Ability of Graphene Oxide Membranes to Adsorb Aqueous Acetaminophen” in the Environmental category, Malika won second place.  The judges also awarded her an invitation to both the Connecticut Science & Engineering Fair and the GENIUS Olympiad competition, an international high school competition for environmentally-focused research projects.

“The Science Research program has allowed me to deepen my interests in chemistry and environmental science because it has allowed me to conduct my own studies in these areas which I never thought I would be able to do until college,” Malika said.  “[Through my research,] I wanted to come up with a less expensive way to filter dangerous pollutant ions from water than reverse osmosis which many people do not have access to.”