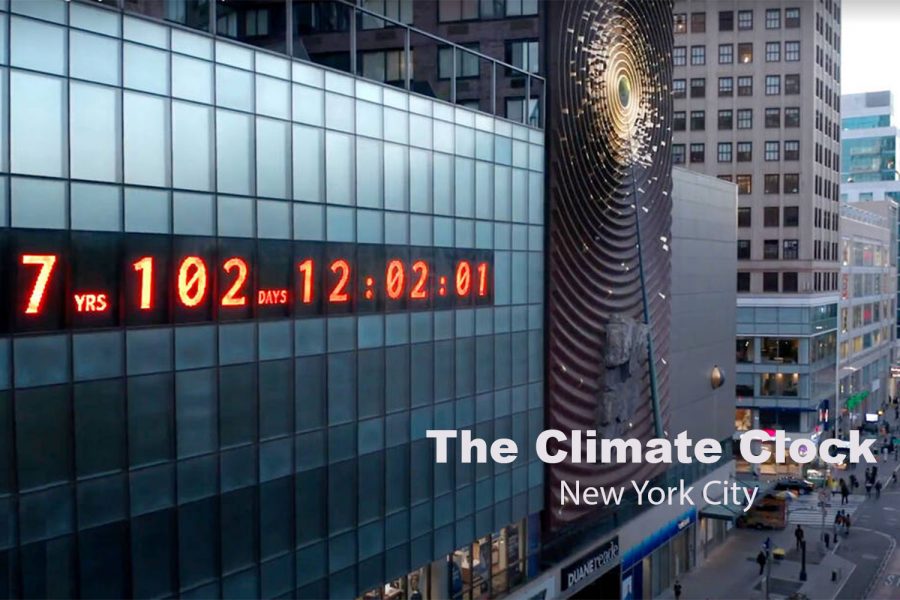 The Climate Clock, on the side of a building in Union Square, displays the amount of time left until climate change takes full effect.

Artists Mr. Gan Golan and Mr. Andrew Boyd revealed the Climate Clock in New York City September 17.  This clock in Union Square typically displays the time, but to commemorate climate week, it showed passersby how long humanity has to stop the effects of climate change.  The Climate Clock’s purpose is to inform and encourage people worldwide to make individual changes in their day-to-day lives to save the planet.

During an interview September 23 with the The Ted Alexandro Show, Mr. Boyd and Mr. Golan said that the time left on the clock represents how long our population has to combat the effects of global warming before it’s out of our control.  The first side of the clock indicates the years, days, hours, minutes, and seconds until the Earth’s carbon supply runs out.  The other side highlights the “lifeline” in green numbers.  The clock’s lifeline displays the percentage of global energy generated by renewable resources.  The goal of the lifeline is to reach 100 percent before the deadline reaches zero.

Although the clock is no longer on display in Union Square, people can still view it online.  In order to prevent the effects of climate change from escalating, humanity has to use the “window,” outlined on the Climate Clock, to make an impact on our planet.

Sacred Heart seniors Hadley Noonan and Mary O’Connor, co-heads of the Sustainability Club, have already helped to make a change.  Last year, the club sold reusable tumblers to the Sacred Heart community to raise money and promote sustainable practices within the school.  In the future, Mary and Hadley hope to share a plan they have for the Upper School.

“Mary and I want to craft a plan that would raise money in support of a composing system, which would teach all members of our community a valuable lesson on reducing waste,” Hadley said.

Although the clock reveals that there are seven years until the Earth suffers completely from climate change, global warming has already made its mark on California this past year.  The wildfires in California were just a preview of what will happen if the Earth’s temperature increases more than one and a half degrees Celsius.  The fires swept through the valley area of California, destroying many structures, including homes.

The Earth’s climate has undergone serious changes over the years.  The global temperature increased by two degrees Fahrenheit since 1880, according to nasa.gov.  In the future, if the Earth’s average temperature exceeds by another one and a half degrees Celsius, it could result in more wildfires, heatwaves, intense tropical storms, and droughts.

Ms. Amy Dillane, Upper School Biology Teacher, gave her insight on the causes of climate change and how humans can affect the outcome.

“The burning of fossil fuels contributes to increased gases in the atmosphere, which trap solar radiation from reflecting off of the earth’s surface as heat,” Ms. Dillane said.  “The resulting increased temperatures negatively impact our oceans, weather, food supply, and health.”

In order to hold the Sacred Heart community accountable, Mary and Hadley hope to use the message of the Climate Clock to spread awareness about the role students can play in reducing global warming.

“From what I’ve read about the Climate Clock, I understand that it has served as a jarring reminder that we directly impact our future,” Hadley said.  “We must actively work to mitigate the effects of climate change through holding ourselves, big businesses, and politicians accountable, especially over the course of the next seven years.  Mary and I certainly hope to work towards helping make sustainability easy and fun in our routines at home and at school.”