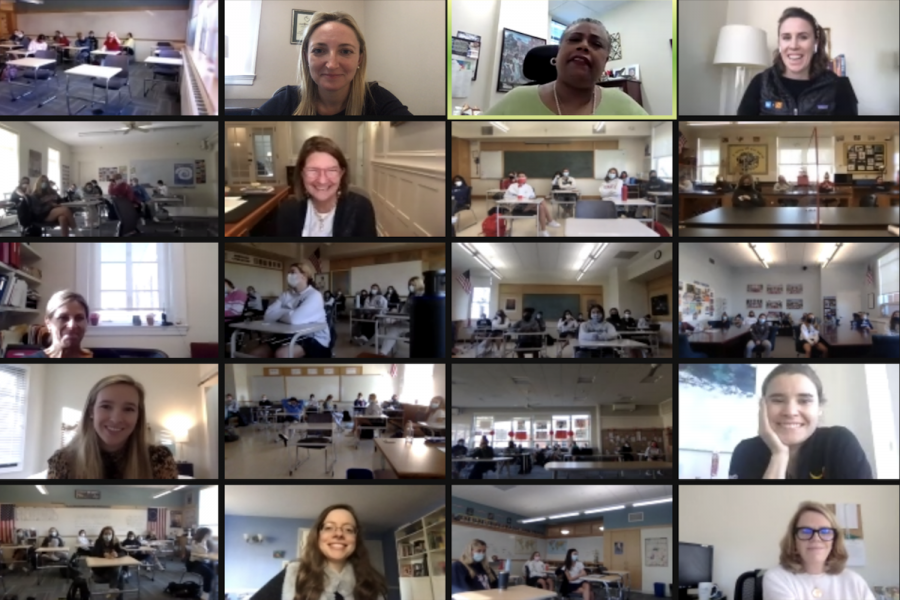 The annual tradition of hosting featured alumnae to speak about their careers continues virtually over Zoom this year.

Ms. Hendricks is a Public Policy Executive and works in the Community Services and Community Outreach Office of Senator Chris Van Hollen of Maryland.  She received her Bachelor of Arts (B.A.) degree in Political Science from Mount Holyoke College and then went on to pursue a Juris Doctor (J.D.) degree from New York University.  Ms. Hendricks originally worked as a lawyer in Washington, D.C. before realizing that she did not want to practice law.  She instead decided to pursue a career in public policy that focuses on pediatric and adolescent health.

Ms. Shullman currently works as a General Counsel and Chief Privacy Officer at TripleLift, a technology company based in New York, New York.  Ms. Shullman received her B.A. degree in Government and Psychology from Georgetown University and her J.D. from the Columbia University School of Law.

Ms. Barragan is a Migration Health Officer at the International Organization for Migration in Geneva, Switzerland.  Ms. Barragan earned her B.A. in International Studies and Psychology from Johns Hopkins University.  She went on to receive a Master of Public Health from the London School of Hygiene and Tropical Medicine.

Ms. Barragan is currently pursuing her second Master of Public Health degree to support her future endeavors.  She offered advice to students about how to take advantage of future career opportunities.

“If you find yourself in a job that you like, that you’re interested in, show it,” Ms. Barragan said.  “Remain engaged, take initiative, be proactive, and be flexible.”

Ms. Leitner works as a Brand Manager for the brand LIFEWTR, which is under the management of PepsiCo.  Ms. Leitner received her B.A. in American Studies from Georgetown University and her Master of Business Administration (M.B.A.) in Marketing and Operations from the Wharton School of the University of Pennsylvania.  Ms. Leitner mentioned the connections with her classmates that she made during her time at Sacred Heart.

“I really came into my own because of the experience at Sacred Heart, my classmates, our teachers, the administration was very welcoming and really wanted to hear what you had to say, but also encouraged you to listen to what others had to say,” Ms. Leitner said.

Ms. Keller is a Franchise Production Coordinator at Lucasfilm, an American film and television production company that is a branch of The Walt Disney Studios enterprise.  Ms. Keller studied at Tulane University, graduating with a B.A. degree in Economics, Digital Media Production, and Chinese.

Mrs. Meghan Mara Ryan ’01, Director of Alumnae Relations, highlights the benefits of this annual gathering of alumnae and students.

“Through hearing from alumnae with various professional experiences, in geographically diverse locations, our students are able to gain a broader global perspective of opportunities available to them.”