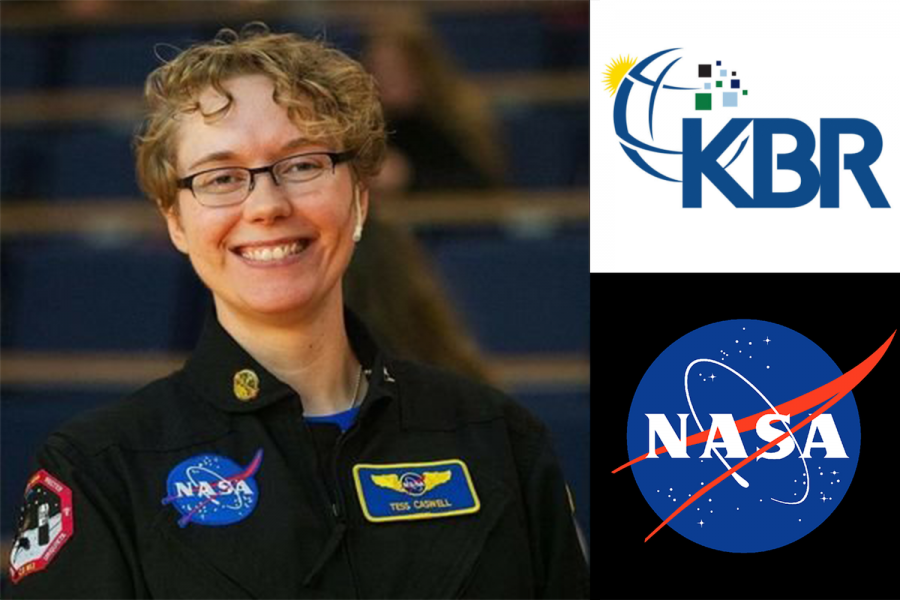 Sacred Heart Greenwich welcomed Dr. Tess Caswell, Spacewalk Operations Engineer at KBR, Incorporated, November 20 to speak to Upper School students over Zoom about how her passion for engineering, geology, and space exploration led to her career.  After working in the commercial space exploration sphere at Blue Origin for two years as the lead capsule controller, Dr. Caswell now uses her engineering skills in conjunction with the National Aeronautics and Space Administration (NASA) to teach astronauts how to perform spacewalks.

Dr. Caswell’s interest in space began when she attended a space camp at the age of 12.  From there, she decided to focus primarily on engineering in order to achieve her dream of working in the space exploration field.

“When I was a kid, I met a couple of astronauts and they told me that if I also wanted to go to space, I should become an engineer,” Dr. Caswell said.  “I also did internships in a variety of different places.  I just worked on a whole bunch of different projects and sampled the different things that are available to someone who wants to work in aerospace and really just got a taste of what I might want to be when I grow up.”

Dr. Caswell earned a Bachelor of Science degree in Mechanical Engineering from the University of Alaska Fairbanks.  As the university is the only one in the world with its own sounding rocket launch facility, Dr. Caswell was able to conduct in-depth research throughout her undergraduate career and even participate in a rocket launch as a senior.  She then went on to study geological sciences at Brown University, where she realized her passion for scientific discoveries as well as space exploration.

Astronauts conduct spacewalks for NASA in order to explore possible new locations and test out new equipment, such as spacesuits and tools.  Oftentimes, spacewalks, specifically in orbit, allow astronauts to repair, upgrade, or build technology, such as the International Space Station (ISS).  From 2009 to 2012, Dr. Caswell provided planning and support for the Environmental and Thermal Operating Systems (ETHOS) in Mission Control for the ISS.

In her current position at NASA’s Johnson Space Center located in Houston, Texas, Dr. Caswell plans out spacewalks and trains astronauts how to perform them safely.  During training, the astronauts practice in various different environments, using mockups, virtual reality, classrooms, and underwater facilities, like the Neutral Buoyancy Laboratory (NBL).

With the new age of space exploration, problems may arise that astronauts need to address quickly with critical thinking.  As a result, Dr. Caswell teaches the astronauts a wide range of general skills so that they are prepared to perform whatever tasks come their way whilst they are in orbit.  Dr. Caswell notes that the main advantage of humans going up into space themselves, as opposed to robots or machines, is that well-trained astronauts are able to think critically and adapt to any given situation.

“Humans can, in addition to moving quickly and making a lot of scientific progress, can also solve problems and keep the mission going safely,” Dr. Caswell said.  “So, that is why we are teaching our current class of astronauts, the ones who were just hired a couple of years ago, to work on the moon, to go out into the field, and to explore, not just do work.”

During her virtual visit at Sacred Heart, students from the Advanced Placement (AP) Physics class were able to ask Dr. Caswell questions about her experiences with training astronauts and spacewalks.  Senior Piper Gilbert, a member of the class, met Dr. Caswell through Sacred Heart’s International Business Machines (IBM) and NASA partnership.  As an aspiring astronaut, Piper has since been able to ask Dr. Caswell about her experience in the field and to learn what her future career might look like.

“In my time with Dr. Caswell, I asked a lot about her career and how she got to where she is today through studies, internships, and jobs,” Piper said.  “I talked with her about her path, why she chose the field she did, and what she’s passionate about.  I learned primarily about the resilience and dedication it takes to advance in such a scientific and flourishing field.”

Piper welcomed the opportunity to hear Dr. Caswell, a woman in the Science, Technology, Engineering, and Mathematics (STEM) field, speak to the Upper School about her career.  She notes how it is especially important for the young women in the Sacred Heart community to gain exposure to many different professional fields, especially those that are historically male-dominated.

“Women, especially young women, are often insecure about their abilities and passions,” Piper said.  “I think it’s so important for our community to be exposed to women with careers in a heavily male-dominated field—it’s encouraging and inspiring to know that other women have gone before us and subverted the ingrained expectations.  It’s a reminder to all of us, especially the younger girls, that they shouldn’t listen to anyone who tells them they can’t or shouldn’t do something, just because they’re women.”