Entrepreneurship for women can be a JoyRide 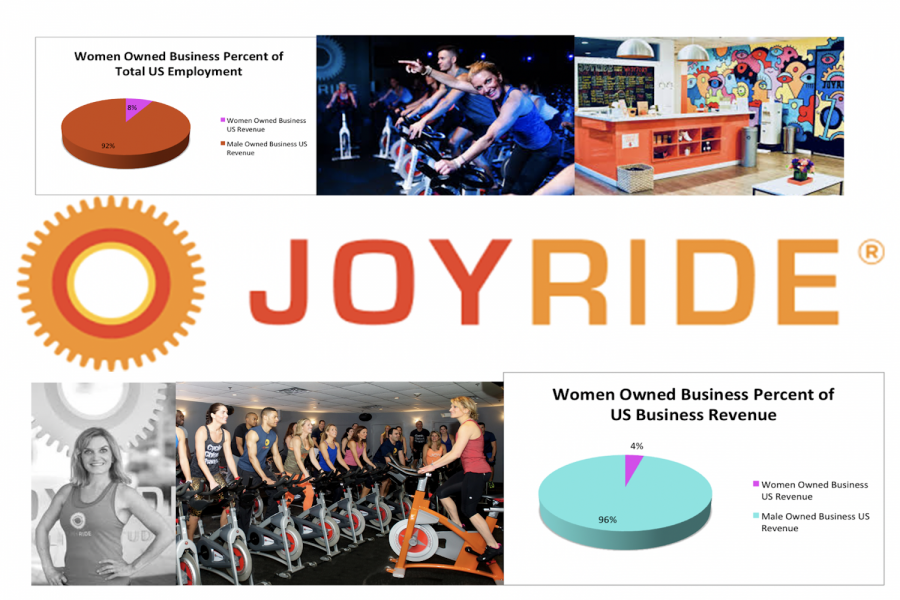 Mrs. Rhodie Lorenz, aunt of Sacred Heart Greenwich sophomore Olivia Caponiti, and alumnae Ms. Madeleine Caponiti ’15 and Ms. Isabella Caponiti ’16, is the co-founder and co-owner of JoyRide Cycling Studio.  Throughout her career, Mrs. Lorenz has been an advocate for female entrepreneurship and leadership.  She turned her passion into a business, pushing women around the world to do the same and defy the gender gap between female and male entrepreneurs.  Within the walls of Sacred Heart, senior Nina Ferrucci has been an example of female entrepreneurship through starting her own small cupcake business.

Ten years ago, Mrs. Lorenz partnered with Ms. Amy Hochhauser and Ms. Debbie Katz to found the business.  Prior to this, both Ms. Hochhauser and Ms. Katz avidly participated in other fitness programs in Westport, Connecticut, inspiring them to work together to open their own fitness studio.  Although Mrs. Lorenz’s partners knew little about spinning, they were crucial to the fundraising and marketing side of the business.  In collaborating and working with each other‘s skill sets, the three women were able to make their dream a reality in 2011.

“I think that when starting a business it is essential to have such complementary skills as there are so many elements that come into play for one to be successful,” Mrs. Lorenz said.  “I have always had a love and passion for fitness that drove me to pursue my longing to open a studio.  Despite my strengths, I needed partners with different skills that could help me to initiate our company that is now JoyRide.”

After opening the first location of JoyRide Cycling Studio in Westport, Connecticut, Mrs. Lorenz and her partners expanded the business to four different locations, reaching customers from Connecticut to Texas.  In addition to cycling, the studio is a multi-fitness resource, offering programs such as strength training, high intensity interval training (HIIT), pilates, bar, and circuit.

As an entrepreneur, there are many steps in starting, marketing, and expanding a new business.  JoyRide began to build up a supportive community of riders, prompting Mrs. Lorenz and her partners to open more studios across the country.  Instead of buying out new spaces and building studios in desired locations, the company opted to license its brand to people who wanted to open a studio with their own funding.  This enabled JoyRide to expand much faster.  When the new studios opened, Mrs. Lorenz went to all of them to train the instructors in order to maintain the quality of the service.  She continues to work with these licensed studios to improve the business as a whole.  As the business began to flourish, Mrs. Lorenz became focused on helping, advocating for, and giving advice to other women with similar entrepreneurial dreams.

“The best piece of advice I would give to people, especially women, who want to be entrepreneurs one day is to just keep going and keep showing up,” Mrs. Lorenz said.  “I hope to motivate all women to put their dream into action no matter how scary it may seem.  Honestly, you are going to have setbacks and make a ton of mistakes.  Not only is it hard to start something that has never been done before, but by simply being a women entrepreneur you are going to face additional obstacle but, ultimately, it can be very fulfilling.”

Women-owned businesses account for only 39 percent of all privately held firms in the United States, according to nawbo.org.  Another statistic notes that more than 27 percent of female entrepreneurs start companies as a last resort, when they are in need of money and resources, while only 21.8 percent of men are in that same position, according to score.org.  In short, fewer women have the ability to initiate a business out of love and passion, and not solely in the midst of desperation.

“Business has been traditionally male-dominated and in many fields it still is,” Mrs. Lorenz said.  “Obtaining capital and investment for female-owned businesses is a greater challenge than male-run businesses.  Additionally, while women have more opportunity in the business world, many of the traditional demands of child rearing, meal preparation and running a household still fall under the purview of the female’s role.  As such, the female entrepreneur often must juggle more work and responsibilities than her male counterpart.”

Nina is a young entrepreneur in the Sacred Heart community.  With a passion for baking, Nina started her own cupcake business named Cupcake Culture.  She constantly bakes, decorates, and delivers her own unique cupcakes to a variety of customers in the area.  Nina shared how other female entrepreneurs inspired her to take her interest in baking to the next level.

“These women entrepreneurs love what they do, are high-achievers, thoughtful, innovative, and open-minded,” Nina said.  “They gave me the motivation to turn my dream into a reality and my hobby into a business.  To close the gap between the number of men and women entrepreneurs, women, including me, should feel more confident in their ideas and work towards a plan of success instead of prematurely assuming they would fail.”